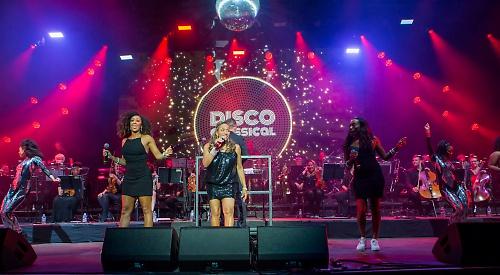 KATHY SLEDGE got a party vibe going from the off.

The singer’s joy at performing was clear and infectious as she smiled and danced her way around the stage and made sure everyone had a good, fun night.

She was particularly animated when singing Sister Sledge’s own hits such as We’re Lost in the Music and He’s the Greatest Dancer, but was also able to get the crowd going with other dance hits such as Don’t Stop ’Til You Get Enough by Michael Jackson and Everybody Dance by Chic.

The accompanying Disco Classical band, playing disco music with a full orchestra, helped give the night a unique Henley feel.

It was disappointing when Sledge left the stage at 930pm, but the three singers from Disco Classical were more than able to keep the crowd going for half an hour with songs such as I’m Coming Out by Diana Ross and Take That’s Relight My Fire.

Sledge returned at 10pm for two more songs, ending with a final encore of We Are Family. This captured the mood of the evening perfectly, with the audience hugging, dancing and chatting in the aisles. Henley felt like it had been let out to play again, and this was the perfect way to celebrate.