Amarillo singer knows the way to the Kenton 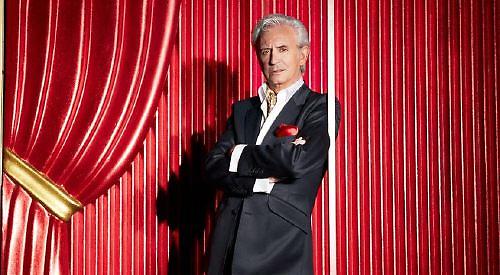 THERE may be no second acts in American lives, according to
F Scott Fitzgerald, but that has never been a problem where the veteran British singer Tony Christie is concerned.

The 78-year-old marked his 60th year in showbusiness this year and 50 years since his first hit single, Las Vegas, which charted in January 1971, reaching number 21.

In what was to prove his breakthrough year, Christie enjoyed a number 2 hit with I Did What I Did for Maria and a number 18 with (Is This the Way to) Amarillo.

Written by Neil Sedaka and Howard Greenfield, Christie’s version of the song about a man travelling to Amarillo in Texas to find his girlfriend Marie reached number 1 in Germany, Sweden, Denmark and Spain.

Comedian Peter Kay later used it as the theme tune for his Channel 4 sitcom Phoenix Nights and in 2005 it was chosen as that year’s Comic Relief charity single.

The song spent seven weeks at number 1 and helped propel Christie’s Definitive Collection to the top of the album charts.

A decade and a half on, the singer is hitting the road with Avenues and Alleyways, a 22-date greatest hits tour that opens at the Kenton Theatre on Saturday, October 2 at 7.30pm.

Despite having reached retirement age, Christie makes it clear he has no plans in that direction — especially after having been confined to quarters during the pandemic.

The singer, who lives in Lichfield, Staffordshire, returned to playing live at the start of July with a home town concert at the cathedral city’s Garrick Theatre.

“I think it’s one of the best shows I ever did,” he says.

“I got a standing ovation and because I’ve been off for so long it’s just great to get back on a stage and do my job.

“A lot of the audience stopped at the stage door on the way out and told me, ‘We’ve seen you so many times but that was the best — you’ve excelled yourself tonight.’

“Which was nice to hear because when you’re not working for a long time you get nervous about will you forget things, will you make a mistake and all that kind of thing. But it worked out fantastic.”

Having originally planned an autumn tour of around 40 shows, Christie and his son Sean, who doubles as his manager, have now decided to postpone half the planned dates until next spring.

It seems that after 18 months of not going out to theatres, some people have got out of the habit, but Christie says that audiences are slowly but surely starting to come back.

“Originally this was going to be one of my busiest years,” he says.

“The late bandleader Nelson Riddle’s son Chris got in contact with me because when his father died he left him all these arrangements they did for Frank Sinatra, Nat King Cole and all the greats.

“Chris put together a band, the Nelson Riddle Orchestra, and he came over to the UK to see me and said would I go and be the singer to do all these songs.

“There was interest from promoters in America and Canada, Australia and New Zealand — it was worldwide. I would have been working solidly this year and then all of a sudden the pandemic hit and it was just cancelled.”

Partly in response to the unprecedented circumstances of the past 18 months, Christie’s new tour takes in many venues he has never played before in all his long career, including the Kenton.

“We were just panicking about it because again there was this fear that they might close down again, you know? My son has picked places that I haven’t worked before. I think what he wants to do is try out these new theatres.”

Having enjoyed huge success in Germany over the years, Christie was recently invited to fly out to Düsseldorf for the recording of a TV special during which he was presented with a lifetime achievement award for his contribution to popular music.

He says: “We went three hours early to the airport and still nearly missed the flight. The paperwork and things you had to go through — then when we got to Düsseldorf we had to go somewhere else to do the tests again.

Despite his frustration at the time, Christie stresses that he would in fact be delighted to tour the continent once more.

“Yeah, everywhere — I mean, it’s what I do,” he says. “Sitting at home and not working has nearly killed me because I’m used to working. I’ve worked all my life and I’ve never turned work down.”

Christie will be backed at the Kenton by his long-serving touring band, a number of whom he says were badly affected by the pandemic shutdown.

“Luckily a few of them are university teachers, they teach music and what have you, so they’ve had their jobs.

“They are top professional players from all over the place but it will be nice to get together again because apart from being colleagues we’re mates as well.”

Songs to listen out for include I Did What I Did for Maria, Walk Like a Panther, Las Vegas, Avenues and Alleyways and (Is This the Way to) Amarillo.

Having last released an album five years ago, Christie says that once the spring leg of his tour is out of the way he fancies going back into the studio.

“I would like to do some more recording and just carry on working, basically,” he says.

“Quite a lot of the work I do is in Germany, Austria, Switzerland, that sort of area — I’ve had more success over there than over here, to be honest.

“When it went sort of quiet for me over here I suddenly started having success over there.

“I signed to a German producer called Jack White and the first song I recorded was a top 10 hit.

“And the albums — we sold a million albums. You know, it was a different world and I found a new audience.”

Christie’s eyes are now fixed firmly on the future and a possible appearance at Glastonbury next summer.

“I’m looking forward to playing festivals again,” he says. “I was supposed to be doing Glastonbury and they’ve put it back to next year now, so hopefully I’ve still got my name on it.”