Musical play came from the heart too 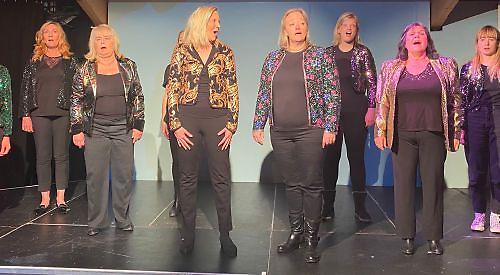 THERE was a celebratory buzz as HAODS members took to the stage once again on Thursday for Sing From the Heart, a new piece by local writer Mike Rowbottom.

The society dubs itself “amateur” but this performance came across as highly professional in every respect.

A simple but effective set took the audience to the community college, waiting for rehearsal.

Choir leader and force of nature Phyllis (beautifully played as both funny and sassy by Eileen Pinkarchevski) is gathering her disparate band of singers to “sing up, sing strong, sing proud!”

But she has some unsettling news for the group — they are about to start singing in public.

The mantra of the Melodic Madonnas is that “Music will heal your soul!” This mission statement is borne out through a collection of impressive musical numbers written by Rowbottom and delivered very harmoniously and with gusto by the cast, under the musical direction of Sue Huntingford-Ledger.

I can’t settle on a favourite song, but The Man Who Came from Nowhere is still ringing in my ears.

Sing From the Heart is billed as a play with music rather than a musical. Julie Huntington’s skilled direction brings out the strong storyline and characterisation, with the choir members all finding their way through different personal circumstances.

Fiona Huntingford-Ledger is strong as the antagonistic Joanna, who knows she has a fine voice and is backed up by her cheery mate, Catherine (Samantha Riley). Bossy ex-cop Cynthia (Nicola Gordon) seizes every opportunity to take control. Ebullient Mary (Dionne Robbins) presents a contrast to long-suffering Angela (Jenny Haywood). In the shadows is shy Lorna (Liberty Barlow).

Arriving late — always — is Linda (Heather Trevis), who has joined the choir in spite of her controlling husband. The question posed from the start is where haughty newcomer Paula (played with cool aplomb by Harriet Jamieson) will fit into the group.

Edgy interactions between the women are conveyed convincingly and with humour by a very committed cast.

There is also a grudge between the choir members and caretaker Jamie (Jack Prince), who despite all his efforts has been labelled as coming from the wrong side of the tracks.

Strong feelings about gender roles pile on to judgments about class — and bickering within the choir multiplies. Squabbles deepen into rivalries and dirty tricks are planned. Ultimately, hostility between Joanna and Paula descends into a physical fight — that turns into a kiss.

Problems are solved and enemies reconciled as the women sing together.

There’s a “pantomime villain” moment for Glen Lambert as Linda’s dodgy husband Pete. But the tone is upbeat as the choir claims glory at the Choirs’ Convention. The final song, Step into the Light, carries the optimistic mood.

Sing From the Heart finds HAODS members in fine voice and full of energy. Take skilled writing, add accomplished direction and lively performances and you have a recipe for a wonderful production and a very enjoyable evening. Well done to all involved.