Soloist’s communication is well worth trumpeting 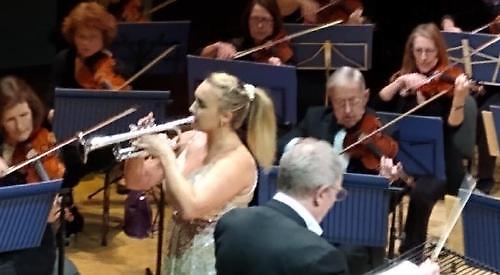 The soloist was Matilda Lloyd, the winner of the 2014 BBC Young Musician brass final, who since then has gone on to establish herself as a rare talent — intuitive, intelligent and deeply musical.

Phrases came from nowhere and her sustained tone was unwavering.

I was there with three other musicians, all at different stages in their careers, and we were collectively stunned by Lloyd’s commitment and ability to communicate the music on a very deep level to the audience.

Ably supported by the orchestra she captured our attention from the first to the last note.

The first movement danced along with drive and energy; the second movement was taken at a steady tempo depicting something of the lyrical quality with perfect tonal control from the soloist.

The final movement was spectacular in delivery with wonderful dialogue between soloist and orchestra under Ian Brown’s expert direction.

The wonderfully evocative Quiet City by Aaron Copland was beautifully conveyed by Lloyd with Jasmine Huxtable-Wright playing the cor anglais.

The 10-minute-long composition, originally incidental music for a play by Irwin Shaw, refers to two Jewish brothers represented by the two instruments supported by a string orchestra.

One brother (cor anglais) wanders the streets of New York at night troubled by the rejection of his Jewish heritage for material gain.

His brother’s trumpet playing reminds him of the conflict in his heart.

After the interval we heard Brahms’s Symphony No 3, and a special mention should be made of the toneful horn section which showed impeccable timing and assurance throughout.

I felt the first and third movements were particularly strong.

The first movement is full of rhythmic energy so typical of Brahms in all his symphonies and the orchestra showed their musicality in weaving these together with a skilled leader and conductor in charge.

Beautiful cello playing introduced the famous third movement and the orchestral clarity as the texture built was superbly governed by the conductor, with all sections of the orchestra sensitively communicating with one another.

Henley should be proud to have such a fine orchestra and I am looking forward to the Christmas concert at Christ Church, Henley, on Sunday, December 18, at 6.30pm.

The programme includes popular works by Bizet, Bach/Stokowski, Khachaturian, Boccherini/Berio and Anderson, with carols for all.

There is also an 4.30pm Christmas concert suitable for families with young children.

Do come along and support your local orchestra.