Lipstick singer ready to bring it all back home 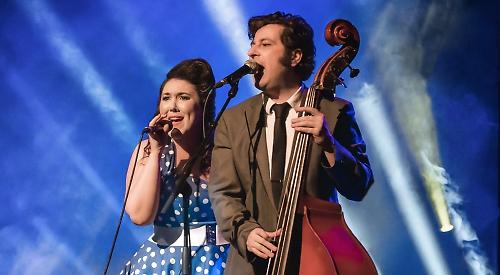 A SINGER from Charvil who started a band celebrating the greatest hits of the Fifties and Sixties is playing a homecoming show at the Kenton Theatre tomorrow night (Saturday).

Nicola Seekings-Smith is the lead singer of Lipstick On Your Collar, who in normal times tour the UK for 10 months of the year, playing to packed houses.

The show covers the period from the birth of rock ’n’ roll through to the Beatles and the British Invasion.

Following almost 18 months of being unable to perform due to the coronavirus pandemic, the six-piece have been back on the road since the start of September.

But as they prepare to take a break during the forthcoming panto season, they are continuing the tradition of playing their last show of the year at the Kenton.

Nicola, who was born in Windsor, moved to Charvil at the age of four when her parents took over the post office and stores in Park View Drive South.

She says: “We play the Kenton because I used to perform there when I was young — and that’s really what gave me the bug. We like to go back there every year because we get to play to our home crowd, which is lovely.”

Nicola, who trained as a dancer, singer and actress at London’s Italia Conti Academy of Theatre Arts, says that growing up she always knew she wanted to sing for a living.

“I was about five or six and I just really loved singing all the time,” she says. “I’d be running around the house and walking around the shop singing to the customers — I just loved it.

“Then when I was about seven, I started singing lessons locally. I always knew, literally from my earliest memory, that I wanted to be a singer.”

Now 37, Nicola’s fledgling appearances at the Kenton came courtesy of the Henley Children’s Theatre group, which still runs weekly classes in the town.

She says that while neither of her parents sings or plays an instrument, they both enjoyed a wide range of music and encouraged her love of performing.

“When I was about 11, I saw an ad in The Stage newspaper for a show at the London Palladium — and they wanted children,” says Nicola.

“I persuaded my parents to take me for this audition. It was at Elstree film studios, which was quite thrilling as well, and I got the part.”

Having gained a foothold in the industry, Nicola performed in West End musical theatre shows throughout her teens.

She was helped along the way by her friendship with the late jazz singer Marion Montgomery and her husband Laurie Holloway, the founders of the Montgomery Holloway Music Trust, both of whom she also performed with.

“Without them I literally wouldn’t be where I am today,” says Nicola. “I pretty much owe everything to those guys.”

After graduating from Italia Conti, she found work in a variety of touring theatre shows.

But over time the desire to strike out on her own took hold.

“I’d do contract work, so you go off and you do a show for however long it is, and I was just kind of finding that you come out and then obviously you’re searching for your next job. You go for auditions and something gets cancelled or moved and suddenly you’re out of work again.

“And I went, you know what, I just want to do something a bit more solid.”

Fortunately, inspiration promptly arrived in the form of an Elvis Presley tour that Nicola worked on.

“The music was fantastic and I loved being out on the road,” she says. “It was more of a band setting than musical theatre, which I actually really enjoyed. I loved being with the boys and the musos and it was a different spin for me.”

On returning home, she told her long-term partner Adrian Jones, who then worked in IT, that she had had an idea for a show dedicated to the music of the Fifties and Sixties.

“I said to Adrian, ‘I really want to do this ourselves now — there’s no reason why we couldn’t put this together ourselves.’

“So we went out and we did a lot of private functions and weddings and things like that as a band and straight from the off it just took off and got bigger and bigger. Then in 2016 we decided to launch it as a theatre tour, so we got a promoter and he booked an initial run of dates because we needed to see how it would go.

“It’s a big transition, going from private functions to doing it as a theatre show — it was a totally different concept.

“The show works through the years and we had video projection in the background. We had full lighting and everything, so it was a big risk and a big thing to do.

“But we tried it and the whole preview tour sold out — every single theatre. It just went through the roof. From the first show it was five-star reviews and a standing ovation. We were like, ‘Okay, this does work.’

“Then we decided to take it on a full UK tour the following year, so 2017 was our first full year out on the road, at which point we brought everything in-house.

“We assembled our little crew, brought in bigger lighting and everything just expanded from there.

“Year on year it has just built up. Pre-covid we were hitting 1,000-seaters and pretty much selling them out, so it has grown massively.”

When the pandemic hit, the band, who take their name from the 1959 Connie Francis hit, were heading into their most successful year to date.

“It was a killer,” says Nicola. “We had some huge shows coming up that had sold out. We were really riding high.”

Lipstick On Your Collar played their last show before the first covid lockdown on March 14, 2020.

“Over the next week we lost everything,” says Nicola. “We were in the middle of moving house, we were going to get married within two months and our entire world collapsed. But I’m a very optimistic person and I was like, ‘Okay, fine, this is happening.’”

As co-producers of the show, Nicola and Adrian used the long months of lockdown to take stock and work on their comeback.

“From that point of view, the first couple of months was actually quite nice,” says Nicola.

“It was a gorgeous summer, too, and it was nice to just have some time in my own bed and be at home.

“Later, after we realised, ‘Okay, this isn’t going to be a five-minute job, this is going to go on,’ that’s when I really started to find it hard.

“But we invested a lot of time into doing different things with the tour and trying to make it better and asking ourselves ‘How can we advance it?’

“We used our time very well, which has massively helped now we are back on the road because a lot of the jobs we were always catching our tail on we’ve now managed to get done. So from that point of view it was good.”

Understandably, the end of lockdown restrictions this summer came as a huge relief.

“Going into the rehearsal room after 18 months of not seeing the guys was just so emotional,” laughs Nicola. “And that first show back, I was literally in tears.”

Tomorrow’s show, which starts at 7.30pm, is likely to be equally charged and Nicola can’t wait to reconnect with the band’s Henley audience.

“It’s our local venue and we love doing it,” she says. “It’s just great to come home, you know?”

• Two short preview videos of the band in concert can be viewed online at www.facebook.com/
LipstickOnYourCollarUK