Musical’s star wants to rock you this Christmas 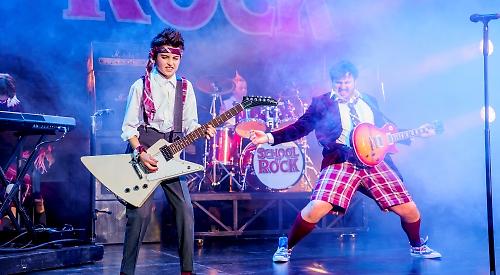 THE star of the hit Andrew Lloyd Webber musical lighting up the New Theatre Oxford this Christmas is promising to show audiences a rocking good time.

Based on the 2003 film starring Jack Black, School of Rock — The Musical has lyrics by Glenn Slater and a book by Downton Abbey creator Julian Fellowes.

Jake Sharp plays Dewey Finn, an out-of-work rock singer and guitarist who suffers a double blow when he is fired from his own band before being threatened with eviction by his landlords.

Desperate for money to pay the rent, he borrows the identity of his long-time friend and former musical collaborator Ned Schneebly in order to take a job as a substitute teacher at the prestigious Horace Green prep school.

At first, Dewey merely tries to bluff his way through to his first paycheck, but after cottoning on to the musical talents of the students in his class, he forms a band of
fifth-graders and secretly enters them for the upcoming battle of the bands contest.

Having previously played Dewey in the West End, Jake was again cast in the lead role for the musical’s 2021-22 tour of the UK and Ireland, which is continuing until August next year.

For the actor, taking the show to different venues across the UK has only served to underline its wide-ranging appeal across different ages and demographics.

“Mums and dads, aunties and uncles, children, nieces and nephews — everyone loves it the same amount,” he says.

“One of my favourite things is when the dads are at the stage door and they enjoyed it as much as their 10-year-old.”

The tour had been due to open in Birmingham in February but the coronavirus lockdown meant that this was eventually put back to September.

But for Jake the reaction of audiences has made the producers’ decision to persevere with the show all the more worthwhile.

“It has been amazing,” he says “It kind of feels completely different to before — it feels like everyone has been, well, literally locked away and now they just have this new lease of life, this energy.”

Energy, as Jake puts it, is a key part of School of Rock’s appeal.

“It is is a real love letter to live music,” he says. “It’s just a real feel-good, high-energy positive show.

“It champions everyone — it champions music and being part of something together and playing live and putting yourself out there.”

The show opened last week and is playing at the George Street venue until New Year’s Day.

Jake and the other grown-up members of the cast are joined by three rotating teams of 12 talented youngsters who play the students turned future rock prodigies.

And for once it seems the showbiz rule about not working with children or animals does not apply. “It’s unbelievably inspiring,” says Jake. “They are just this fresh bundle of energy and joy and positivity — and they’re borderline annoyingly talented.”

One of the reasons the show has such a feelgood factor is that despite his flaws Dewey does end up inspiring his young charges — something that reminds Jake of his own schooldays.

“I remember having a history teacher who just told a good story,” he says. “And I think that has always been the thing with me — if someone is good at telling a tale and keeping you engaged, then they’re doing their job.”

One of Jake’s favourite moments in the show is when Dewey tells each of the different members of his class: “You’re in the band!”

“It’s the first time that the kids pick up their instruments and I start teaching them,” he says. “You can feel the whole audience — that’s the moment they’re here for.”

Jake may be playing a part on stage, but his love of the music is not acted. “I am big into rock music,” he says. “It was something that was genuinely handed down to me growing up because my mum and dad are as well.

“Led Zeppelin’s Robert Plant is from near me in the Midlands and obviously Ozzy Osbourne was as well and Slade with their classic Christmas songs. But also more from my generation you’ve got Red Hot Chili Peppers, Foo Fighters, Jeff Buckley — they’re all my absolute idols.”

A Christmas drink will be on the cards for many people in the coming days, but with eight performances a week to fit in, Jake is likely to be on still or sparkling water for the moment.

“The hardest thing about being on tour as Dewey is playing Dewey,” he says. “It’s physically exhausting and mentally exhausting but vocally I have to hydrate. Bad.”

• School of Rock — The Musical is playing until Saturday, January 1. For more information and to book, visit www.atgtickets.com