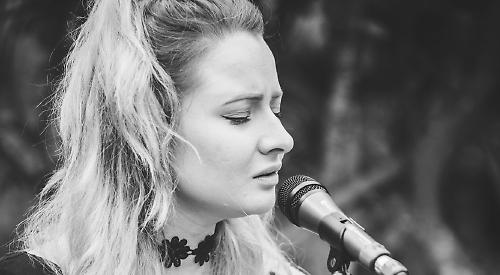 NEXT time you’re shopping at Waitrose spare a thought for the staff member doing the markdowns — they could just be composing a hit single in their head.

That’s where Georgia Michel found unlikely inspiration and the 24-year-old has now notched up more than a million plays on Spotify.

The former Henley College student found labelling yogurts in the Henley supermarket the perfect time to be creative.

She says: “I used to work on reductions and the checking used to be so mundane that I used to find myself writing while I was doing it. There’s actually a few things that I have written while checking yogurts.”

The singer-songwriter, of Greys Hill, Henley, will be performing at the town hall on January 29 as support to Eighties covers band SledgeHammer when her Spotify hit Time to Talk could well be on the agenda.

The concert, in aid of the NSPCC and Sue Ryder, has been organised by her fundraiser mum Karen, who put the show together in the spare time she had after having to pull out of a half marathon.

Georgia says: “I also do covers and singalongs to get everyone going. I’ve got a song called Tiptoe that people know quite well, which is more of a slow one, but then because I’ve been doing more dance music and more pop stuff in the last couple of years, it will probably be the first time I’m gigging that kind of music, so I’m quite excited about that.

“My plan is to start off acoustic with the slower ones and then go into the more pop-y, high energy stuff towards the end, which should go quite nicely into SledgeHammer.”

Georgia first got involved in the local music scene through the Henley Youth Festival which led to her performing at and then organising Music on the Meadows.

She went on to study performing arts at The Henley College and music at Reading College before landing a place at the Leeds Conservatoire to learn songwriting.

She says: “I was fortunate enough to go on two writing camps which were funded by the university.

“I went to Haarlem in the Netherlands for a competition between 100 schools put into groups. We got our songs pitched to Sony and our group actually won the competition.

“Then I managed to go to Helsinki while I was at uni to do another writing camp.”

Her influences include old-school folk music and she’s a fan of Joni Mitchell and Bob Dylan.

Georgia says: “I’m really into my country music but then I’ve found that a lot of the work I’ve been doing recently has been vocals for dance music, which melodically is really high energy and punchy so quite contrasting with the country stuff.

“So I’ve kind of fused it a little bit to be more of an intelligent songwriting on dance music melodies. I like to listen to everything.”