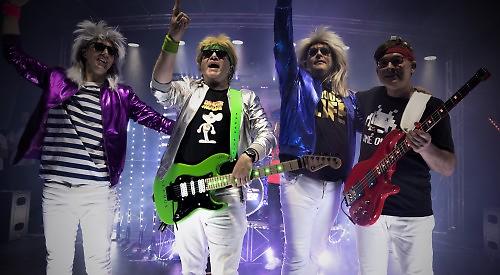 REMEMBER the Eighties? The decade that gave us leg warmers and Lady Di, Gordon Gekko and cellphones as big as bricks also produced a standout musical playlist.

How about unforgettable hits like Radio Ga Ga, Two Tribes, Hungry Like The Wolf or unashamed floor fillers like Wham!’s I’m Your Man and You Spin Me Round by Dead or Alive?

They’ll all be brought boisterously back to life when Eighties covers band SledgeHammer come to Henley at the end of this month.

The four-piece will be donning their metallic bomber jackets and trademark blond wigs to play more than two hours of non-stop Eighties hits in front of a town hall audience who’ll be invited to dress up Eighties-style for the night.

“We guarantee the people of Henley a really good night out,” says SledgeHammer guitarist Simon Bays.

“A typical covers band will do a couple of 45-minute sets with an hour off in between but we don’t do any of that. Once we get up it’s non-stop classic pop and rock.

“And we don’t want to play the sort of songs where people sit down and say, ‘oh, that’s jolly nice’ — we play the stuff that gets people up and dancing and they don’t sit down again.”

Bays, who chose Together in Electric Dreams by The Human League as his own wedding song, admits to being a converted fan of all things Eighties.

He says: “I grew up listening to hard rock but these days I just listen to Eighties music the whole time. We’re seeing that in our audiences too. Even people who weren’t born in that era just love the music.

“It was a slightly strange decade in terms of fashion and many other things but it was a pivotal point in music. All the synthesiser music developed and suddenly it was just something completely different.

“As a band we are fully signed up to the whole Eighties madness. We’ve worn white trousers since we started but then we got into wearing wigs and silly shoes, then started putting lights in our guitars, having exploding smoke cannons on stage, that sort of stuff.”

It’s all a far cry from Bays’s day job as a consultant radiologist
“sitting in a dark room for most of the day, looking at pictures of people’s insides”.

The band all come from Oxfordshire and Buckinghamshire and got together six years ago via what Bays calls “internet dating for musicians”.

They spent the covid lockdowns raising money for charity, especially for Shelter and the homeless.

The Henley concert will also be a fundraiser, this time for the NSPCC and Sue Ryder with raffle prizes including afternoon tea at Danesfield House, a tour of Fairmile Winery, golf at Badgemore Park plus vouchers for Henley eateries the Row Barge and The Square.

In the six years of SledgeHammer, the band has built up an enthusiastic following and Bays hopes some will make the trip to Henley town hall on January 29.

He says: “Some fans that come to see us travel to pretty much wherever we’re playing. For some reason we seem quite popular.”

Not least with Spandau Ballet frontman Tony Hadley, who can be found on YouTube singing SledgeHammer’s praises.

Bays explains: “Tony Hadley lives near Thame and his kids go to school there.

“For the school’s end of year celebrations, Tony, if he’s free, often puts on a gig for them.

“We got invited to be part of the bill one year. He had never seen us play before and he absolutely loved it.”

So what can we expect to hear at Henley?

Bays says: “We have quite a large selection of songs to choose from. There’ll be stuff like New Romantics, some of the rocky things like Bon Jovi, and Erasure and Depeche Mode — it’s the stuff that people just get up and dance to.

“If everything goes to plan it will be a bit of a release valve for people. We guarantee — in capital letters — that people are going to have the best night they’ve had, possibly this side of 1985.”

• Talk of the Town, with support by local singer-songwriter Georgia Michel, begins at 7pm. Drinks and cocktails will be provided by the Rollin Bar and Eighties dress is optional. Tickets cost £20 from
karenmhmichel@gmail.com