Fabulous farewell to two jazz musicians after decades of entertaining 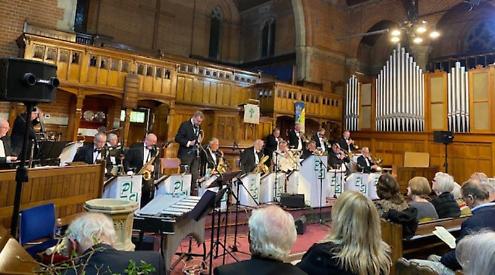 THERE is little more inspiring than watching two nonagenarians putting the younger among us to shame with energy and skills to dream of.

But such was the case at Christ Church in Henley on Saturday night, when Ken Fitt and Alan Grahame, both 94, belted out some fabulous jazz at Henley Rotary Club’s first annual jazz night since 2019. Fitt, a long-time Henley Rotarian, gave a masterclass in wielding the clarinet.

His buddy Grahame did the same but on the vibraphone and with an assortment of weird and wonderful percussion gadgets (who knew a triangle could be so funky?).

Standing ovations, all round. Indeed, so solid a crew were Fitt and Grahame that they almost upstaged the main act, the Paul Sykes Band.

The key word here is “almost” as Sykes and his big band sound were masterful.

For around three hours, they belted out jazz numbers ranging from the celebrated — Glenn Miller’s In the Mood and João Gilberto’s Girl from Ipanema — to lesser-known classics such as Elmer Bernstein’s The Man with the Golden Arm. “They are so tight,” was a common comment heard in the intermission, the ultimate compliment for any band, let alone one with 16 musicians (plus an excellent sound man). Guest appearances by singer Jenny Howe added some vocal razzamatazz, particularly on an Ella Fitzgerald take on Lennon and McCartney’s Can’t Buy Me Love.

Proceeds from the gig went to Rotary International’s Ukraine relief efforts and to the Thames Valley Air Ambulance.

Meanwhile, Fitt and Grahame, announced that this would be their last public appearance after decades of gigging.

Nothing to do with playing, said Fitt, just standing for so long when you are in your mid-Nineties is getting a bit much.