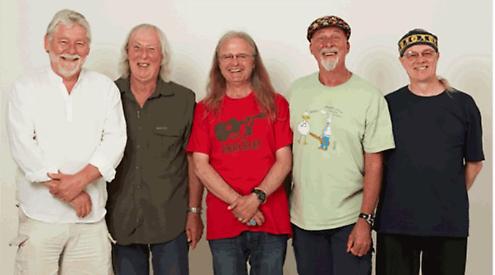 SIMON NICOL loves gigging. This is just as well for a member of folk rockers Fairport Convention, who have been going in various incarnations since 1967, writes Natalie Aldred.

The guitarist is delighted to be resuming touring after the coronavirus pandemic resulted in two years of what he calls “enforced retirement”. The tour includes a visit to Nettlebed Village Club on Monday.

Simon says: “I have absolutely no intention of retiring as long as I can still sing and play. That’s what I love to do, it’s all I know and it’s my raison d’être. It’s joyous to get back in the van, that’s where I love to be and that’s my natural home.”

The band, made up of Simon and Gerry Conway, Chris Leslie, Dave Pegg and Ric Sanders, are known for fusing folk and rock music. They are also firmly on the folk music map for their annual festival held at Cropredy, near Banbury, each August. Simon has a long association with Nettlebed.

He first played there in the late Seventies, when he was in a duo with Dave Swarbrick while Fairport Convention underwent a hiatus.

“My earliest memories of Nettlebed go back much earlier than that,” says Simon. “My dad ended his war days with a stay in Benson and he knew the White Hart. We used to go there for long weekends and Connie, who was the landlady during the war, was still there. We’d go there frequently for family outings.”

One such visit sticks out in Simon’s memory for all the wrong reasons.

He explains: “I nearly spoiled one of these outings by getting chickenpox when I was about five. We went regardless and my dad was a doctor anyway. He said, ‘Oh, Simon can stay in the room’. So they all had a lovely time, nice meals and walks in the country while I was confined to barracks — social distancing in the Fifties.

“I remember it in the old days, when it was a fantastic coaching inn with a lovely atmosphere. They had their own pigs out the back that ate all the restaurant scraps and we used to go and sit and talk to them.

“I remember that particular occasion because of the enforced isolation — I couldn’t go and sit in the sty with the pigs. I think my parents didn’t want to have me seen, wandering around with chickenpox marks, like having a plague child.” Simon says one of the most remarkable aspects of Nettlebed Village Club is its acoustics. He explains: “There’s an acoustic shell behind the stage which is like a parabolic half-dome. It’s behind the proscenium arch. You can’t see it unless you get up close.

“It’s an acoustic design to throw the sound off the stage down the room. There’s a certain point in the centre where you get the internal reflections around your head and the sound goes very, very weird indeed but it’s undetectable out front.

“There’s a natural projection that comes off the stage, which unless you’ve been on the stage you wouldn’t know about.”

Simon is also full of praise for the venue’s team of volunteers, led by Mike Sanderson. He says: “It’s admirable the way that Mike has stewarded the club in that village hall, which is a beautiful building, a really special piece of architecture.

“He has run that ship for 50 years and counting, presenting a unique enthusiasm and semi-professional, really focused performance music. Hats off to him.”

Fairport Convention play at
Nettlebed Village Club on Monday. Doors open at 7.50pm. For more information, call (01628) 636620 between 10am and 8pm only or visit www.nettlebedfolkclub.co.uk

The band will return to their revived Fairport’s Cropredy Convention from Thursday to Saturday, August 11 to 13.