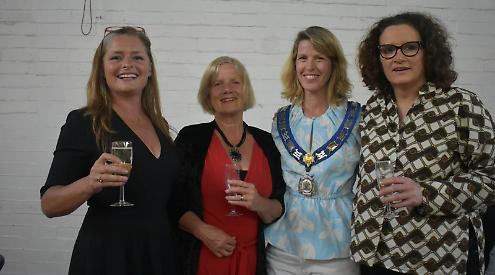 HENLEY Music School has found a base and now hopes to raise an estimated £500,000 to bring it up to scratch.

The school, which until now has been operating through local schools and private classes, will be based at Trinity Hall in Harpsden Road and will have performance and practice spaces and instrument storage.

Laura Reineke, who founded the school in 2010, hopes to be able to offer musical education to every child in the town.

She announced the move at a special event held at the hall attended by about 60 people, including film director Paul Greengrass, who lives in Henley, Mayor Sarah Miller and other town councillors and trustees and teachers from the school.

The event included performances by Ms Reineke, a violinist, her daughter Ava, 19, and teachers, students and alumni of the school.

Ms Reineke said the school had grown massively, with hundreds of children now receiving lessons, and that she had been looking for a dedicated space for a while.

She said: “We want to future-proof ourselves and keep providing this service for the town.

“It’s a fabulous space and we would like it to become a youth centre but with music at its heart, a place that will have whatever children need and they will be able to do it here. This space is incredible and we want to keep its integrity but with the comforts that we need to run a school.

“I started the school in 2010 and it skyrocketed from there. We grew so much that we now cover every school in Henley and there is no more space — we need our own space.

“We offer all kinds of musical education, providing around 140 lessons every week. We provide full scholarships and many children have been asking for bursaries, especially coming out of covid, and we don’t want to put boundaries on what we can do. It is vital that we continue to fundraise.

“Thank you to all my trustees and teachers.”

Mr Greengrass, whose films include The Bourne Supremacy (2004) and The Bourne Ultimatum (2007), said: “According to Plato, music was the soul of life, it comes from the inside and nourishes the soul. One of the things I love about Henley is that it’s a musical town, it’s a wonderful place for music and the school is a fantastic part of it.

“My daughter learnt how to play the cello and we had some wonderful concerts and this is a very important part of the life of Henley and it has nourished many young people, so I want to thank Laura.”

Ms Reineke opened the event by playing a piece with some of the school’s teachers followed by a performance by students playing the piano, flute and cello.

She then introduced her daughter Ava who sang an aria from Mozart’s The Marriage of Figaro.

There was also a performance by Eva-Mariia Pavliuk, 13, who fled Ukraine with her mother Inna Krasnova and is now living with Ms Reineke at her home in Damer Gardens. She played the violin accompanied by Ms Reineke on the piano.

Ms Reineke said: “She is playing my violin because she wasn’t able to pick up hers while they were escaping Ukraine. She has only played it once before but she is very good.

“As a school, we are offering free music lessons to Ukraine citizens who had to leave their country because of the war.”

Tim Hoskins, headteacher of Badgemore Primary School, spoke about the importance of music lessons for children.

He said: “It’s a pleasure to be here to support the music school — it’s slightly ironic because I have little music knowledge, rhythm or talent. I’m not a musician but as an educator I learnt the importance of music from my pupils.

“At Badgemore we believe that behaviour is a form of communication and these music classes were helpful in so many ways.

“Within three months of starting these classes, the children were performing to the whole school. Watching their faces light up and hear them play was a pleasure and these classes defined their time at Badgemore.”

Ms Reineke and the school’s teachers then performed a version of Eternal Flame by The Bangles and teacher Stuart Lewins played the theme tune to Eighties children’s TV drama Jonny Briggs on the trombone.

Ms Reineke thanked her friends and fellow open water swimmers Jo Robb, Susan Barry, Fiona Print and Joan Fennelly, together known as the Henley Mermaids, who raised more than £36,000 for the school by swimming the Channel together in 2020.