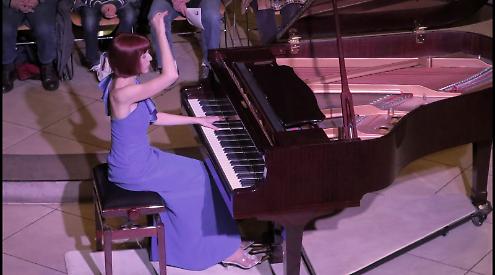 THE programme for the West Forest Sinfonia’s latest concert was a mixed one.

There were four works with no discernible connection yet each piece contributed equally towards the whole with two hours of finely played, immensely enjoyable music.

Fauré’s Pelléas et Mélisande, Op. 80 is a suite derived from the composer’s incidental music for Maurice Maeterlinck’s play of the same name.

Fauré’s trademark serene and melodious style was very much in evidence during this performance, the strings providing a soft-focused ambiance which soared and dipped in suitably restrained climaxes.

In the second movement, the principal oboe sang sweetly over the violins’ backdrop of rapid triplets. The third movement, Fauré’s popular Sicilienne, is primarily a duet and was beautifully played together by the harp and principal flute.

The final sombre Mort de Mélisande was enhanced by the dark, poised tones from the brass section.

Henley pianist Anita D’Attellis was the soloist in the next work, Mendelssohn’s Piano concerto in G minor.

Mendelssohn was a brilliant pianist who took advantage of the advances that had recently been applied to the instrument, resulting in a heavier, louder instrument and better matching the increased size of the orchestra than its classical predecessor.

D’Attellis gave a thrilling account of this technically demanding work, seemingly unfazed by the vivid passagework, and copious runs and arpeggios spanning the length of the keyboard.

She intertwined easily with the orchestra, yet took command in the virtuosic delivery of a sparkling stream of notes.

The Poco Andante, a hymn-like melody in a similar vein to the composer’s Songs without Words, gave us pause for breath.

The soulful theme was introduced with a wonderful, warm tone by the cello section before D’Attellis continued with a graceful, sensitive account of the piano’s more decorative version of the theme.

The finale, introduced by some stirring sounds from the fine brass section, saw the orchestra just about inconsequential at times as D’Attellis’s energy and dazzling fingerwork carried the movement from start to finish: Bravo!

Baratto’s inspiring performance was a real treat. We heard passages of technical brilliance, such as the opening of the improvisatory cadenza, alongside phrases of exquisite delicacy.

Baratto makes a wonderfully expressive sound at both ends of the instrument’s range and is definitely a star for the future.

Mozart’s Symphony No 35 in D provided a fitting finish to this lovely concert and demonstrated the orchestra’s fine sense of ensemble.

The playing was neat and well balanced yet full of gusto, with excellent support from the timpanist.

The second movement was well shaped, although the violins could have been a little more delicate in their high accompanying line and there was a suitably good dance vibe in the Menuetto.

Scurrying passages and an excellent running bassline were notable in the Finale, while the joyful full sound from the whole orchestra brought about a resounding conclusion.