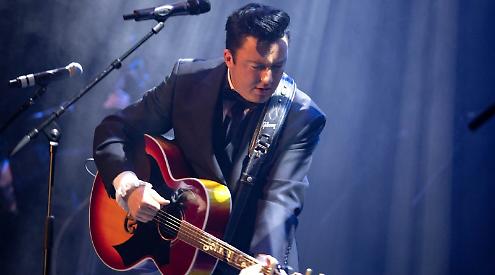 MUSICIAN Clive John, who stars in the Johnny Cash Roadshow, has captured the Man in Black’s essence so well that his is the only show to be endorsed by the family.

Clive says: “I was doing a show just outside Manchester in 2013 and Johnny Cash’s granddaughter Caitlin Crowell was there. She’s the daughter of Johnny’s eldest daughter, Rosanne.”

Caitlin said of his performance: “Clive captures my grandfather just as he was, absolutely authentic, to the point where it felt as if it wasn’t a tribute.”

Rosanne added: “His resemblance is uncanny.”

Clive, who is joined in the show by singer Meghan Thomas as Cash’s wife, June Carter Cash, will be performing at the Kenton Theatre in Henley next Friday, having recently returned to Britain from performing abroad.

He says: “We’ve been on tour to Belgium, Norway, Sweden and the Netherlands. They love him over there as he played and toured extensively.”

The real Cash had a prolific career from the Fifties onwards with music comprising country, rock ’n’ roll, rockabilly, blues, folk and gospel.

He is known for songs such as I Walk the Line, Ring of Fire, Man in Black and A Boy Named Sue and later The Man Comes Around and Hurt.

The singer was divorced when he married June Carter in 1968 and for the next few decades they became inseparable.

They appeared together in the video to accompany Cash’s cover of Hurt not long before they died.

Clive says that he studied Cash carefully in order to get the timbre just right.

“Cash wasn’t a singer’s singer,” he says. “He was a storyteller and there’s a real art in that.

“He sort of half sings and half speaks and it’s a lot trickier than it sounds. It sounds more like John Wayne than Johnny Cash to some people, so to do it well, I’ve really watched and listened and tried to master it as best I can.

“Someone said I sound more like Johnny Cash than Johnny Cash! I do try to get into the persona of him, play his songs to the best of my ability and pay respects to the man.”

Clive, 47, who lives in Malvern, Worcestershire, with his wife Sarah and their three children, is a singer-songwriter in his own right and has had a passion for music since childhood following a nasty accident.

He explains: “I burned my hands very severely when I was a young boy and spent three years in hospital. When I was five, the surgeon recommended to my parents that I should learn to play piano as soon as my hands were big enough to keep my fingers supple.

“I started when I was six, moving on to classical guitar, and I passed grade 7 by the time I was 12.”

Clive struggled to recover from the accident in other ways.

He says: “I could hardly speak and then, when I got my voice back, I developed a very bad stammer.

“Even now it gets hold of me sometimes and it’s the most horrible feeling in the world.

“When I was growing up other children could be horrible about it and that wasn’t a very nice experience but I battled through it and I’ve just accepted that it’s part of me. I’ve had therapy, hypnotherapy and elocution lessons and everything that you can think of but nothing worked.

“But it only affected me when I was speaking and not when I was singing, so it’s obviously a different side of the brain that it affects.”

He decided not to go to university and instead try to make a go of it in the music industry — and succeeded.

“I’ve made a full-time income out of it since I was 17 and I got a record deal by the time I was 24,” he says. “I hear, ‘When are you gonna get a real job?’, all that sort of nonsense from people, but that’s okay, I’ve dealt with it. I’ve always been able to provide for my family and that’s the main thing.”

In 2000, Clive spent six months in Cash’s own America and later released two albums, The Spirit in 2010 and A Brand New Beginning in 2018. One of his songs, September, is played in the show.

He says the show is a chance for the musicians to impart their own energy into Cash’s classic hits.

“I make sure that everybody in the band sings,” he says. “Any of the songs where there is a chance for backing vocals they’re there, even though they might not be on the original.

“It is authentic — I do my hair and we wear the suits. We wear the vintage clothes, the rockabilly dresses. We’ve got the right instrumentation, the double bass and the piano but we give the songs more energy than maybe the originals.

“Some people see the show once a month or more. It is recognised as the number one Johnny Cash roadshow in the UK and Europe.

“Yes, it’s a celebration of Johnny Cash, but it’s also just a good night out. If you like good songs and vocals, good musicality, then you’ll enjoy it.”