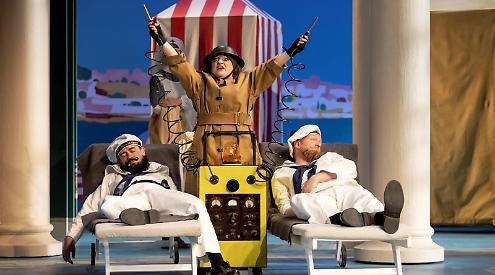 A VISIT to Garsington is always special. Set within the glorious grounds of Wormsley, the audience is decked out in its finery, glasses can be heard tinkling across the lawns and laughter and chat are all around.

Not to mention the additional attractions of pre-performance afternoon teas in the cricket pavilion and visits to the sumptuous walled gardens in vintage buses. If you are also lucky enough to have the sun shining, then this is an evening experience like no other.

The crucial element, though, is the opera itself and here Garsington stands well above its rivals.

For Così fan tutte the singing was second to none and, combined with the English Concert’s exceptional accompaniment and Robert Perdziola’s stunning set design, we witnessed a world-class performance within the intimate glass auditorium.

Mozart’s bubbly comedy is really an ensemble piece involving just a small number of singers, although the few choruses were surprisingly rousing and full-bodied in sound.

The plot is implausible: at the suggestion of the scheming Don Alfonso, two young men disguise themselves in a bid to test the loyalty of their fiancées. As the women, who are sisters, are led astray, further complications ensue until events become farcical in the manner of a true “opera buffa”. Yet there are also traces of melancholy and heartbreak as the women fight with their feelings along the way.

Henry Waddington, as Don Alfonso, makes his mark from the outset. Before the overture is even halfway through, he has established himself as a master of manipulation. His is a rich, melodious voice tinged with darkness, holding safe the secrets of his plot, yet blending beautifully with Fiordiligi and Dorabella in Soave sia il vento. Ailish Tynan is hilarious as his fellow conspirator and maid Despina. Whether it be the simple raise of an eyebrow or a shrug of the shoulder, in the manner of a true comic her timing is spot on.

Vocally, she is also tremendous — her aria In Uomini was captivating and in her various guises (as doctor and notary) she is an essential link in the frequent ensembles.

Fiordiligi and her sister Dorabella are a contrasting pair. Polly Leech captured Dorabella’s perky nature perfectly in E amore un ladroncello. Meanwhile, congratulations to understudy Camilla Harris for taking on Fiordiligi for the entire run. She was outstanding with her spectacular top notes in the famous Per Pieta. What a talent.

Conductor Tobias Ringwood not only mastered the brilliance of the English Concert, a joy to hear from beginning to end, but provided fortepiano accompaniments to the snappily delivered recitatives, ensuring that the pace never wavered.

The production was a recreation of John Cox’s esteemed Così fan tutte for Garsington Manor. It is an experience of real artistic excellence.