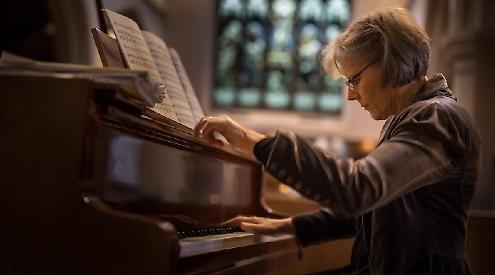 CONCERTS in Caversham was just about able to maintain its Christmas concerts on a shoestring during the pandemic.

Now, after a two-year wait, a trio from the Caversham Ensemble is finally able to perform an evening of music originally scheduled for May 2020 at St Andrew’s Church next Saturday.

The Ensemble is a versatile and fluid group of musicians for this performance featuring Morgan Goff on viola, Max Welford on clarinet and Adrienne Black on piano.

The trio will play a wide range of music, including baroque, classical, Romantic, jazz-inspired and 20th century pieces.

The programme comprises Mozart’s Kegelstatt Trio, with trios for this combination by Max Bruch, as well as Lutoslawski’s Dance Preludes, Marin Marais’ French Dances, Schumann’s Adagio and Allegro, Horowitz’s Sonata and Reinecke’s Trio in A major. Adrienne, one of the artistic directors for Concerts in Caversham, helped set up the professional chamber-music concert series in 2011 with her husband, oboist Timothy Watts and daughter, cellist Naomi Watts, both of whom are members of the Royal Philharmonic Orchestra.

She says: “Morgan is an amazing viola player. He’s an old friend and first met him when I was playing in the Oxford Philharmonic Orchestra. Max is a colleague of his who’s a freelance clarinettist.”

Both Morgan and Max are freelance musicians, playing in the West End theatre production of Les Misérables. London-based Morgan was in the Kreutzer Quartet for 10 years, touring internationally. He is a chamber musician, session musician and solo violist.

Max is a soloist, chamber musician and orchestral player also based in London. Adrienne, a pianist and harpsichordist, has performed extensively in the UK and abroad playing chamber music with many musicians.

She says the concert series managed to keep going throughout the pandemic as they had built up a concert fund.

She adds: “I used that as a kind of buffer to be able to put on basically loss-making concerts because we were only allowed to have 40 in the audience. Normally, the Christmas concert is 200-plus and sells out. I just thought it was important to keep it going.”

There were some tense moments. Adrienne explains: “It was slightly less than 24 hours before the Christmas concert in 2020 and the leader, Tamas Andras, the co-leader of the Royal Philharmonic, rang up on the Friday night to say that he’d had a covid contact and thought he should withdraw.

“It wasn’t just him — his wife was playing, so suddenly we were two violins down the night before the concert. But because it was covid time, nobody was working, or very few people, and we’ve got a big network of contacts and within 10 minutes we’d found a replacement in David Juritz.

“He had to play a concerto and lead the orchestra but he was free — result! It worked out very well on the night.”

Adrienne is looking forward to next Saturday.

“It should be a nice evening,” she says. “It’s a lovely space for chamber music, it’s quite a big church and there’s a big performance area at the front.

“All our musician friends who come and play, without exception, say, ‘What a wonderful acoustic to play in’. There’s a bar open beforehand and during the interval.”