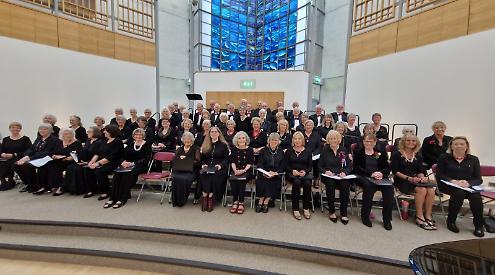 PANGBOURNE Choral Society’s last concert was in June 2019 and they were within days of performing a major work in 2020 when the covid pandemic struck.

So it was a real delight to enjoy the enthusiastic and expressive singing of this local 100-strong group once again.

However, the retreating covid shadows lingered. The post-lockdown schedule resulted in a shortened programme and, with days to spare, both the music director Chris McDade and soprano Phoebe Churcher, a highly talented singing student of Pangbourne College, tested positive for the virus and had to withdraw.

But, as chairman Mick Lewers said: After such a long lay-off, we were determined for the show to go on and our committee managed to locate two fantastic replacements with just 48 hours to go.”

Conductor Sara Benbow has a day job as a barrister but is also music director of St Bartholomew’s Choir (Lower Basildon), and the churches of Whitchurch and Whitchurch Hill as well as associate conductor of the Goring & Streatley Concert Band.

On this showing, she should be able to command greater heights, stimulating the singers to some of the most musical moments that you could hope for.

She was well supported throughout by organist Ian Hockley, who has performed widely in the UK as well as in Oman, France and Romania with both soloists and choirs.

Soprano soloist Rebecca Bell is senior choir director at St Andrew’s School, Pangbourne, and has performed nationwide. As Mick Lewers said: “We were just so fortunate to have such talented musicians within our area and were delighted to welcome them.”

Baritone Tom Asher is a rising star and an alumnus of English National Opera’s Opera Works, performing nationwide in choral and operatic works.

On Saturday, he sang excellently two Vaughan Williams pieces, The Vagabond and Bright is the Ring of Words, and the solo sections in Fauré’s Requiem.

But the singers were the star attraction in this necessarily cameo performance comprising Fauré’s Requiem and Cantique de Jean Racine, Parry’s I was Glad and Handel’s Zadok the Priest.

It was hard to believe that they had sung nothing for nearly three years. The strong influence of the absent music director was evident in some beautiful expressive singing with good diction and timing in a programme that, while short, was very demanding.

This performance was special for another reason — the singing was tinged with a sense of enthusiastic relief to be singing again.

The 200-strong audience gradually shook off their covid reticence and applauded long and hard at the close. A sense of normality returned.

Pangbourne Choral Society will celebrate its golden anniversary in 2024, which will be special, as will the build-up during the 2023 season.

On this showing, we have much to look forward to.