The beautiful and bountiful wildflowers now appearing near here 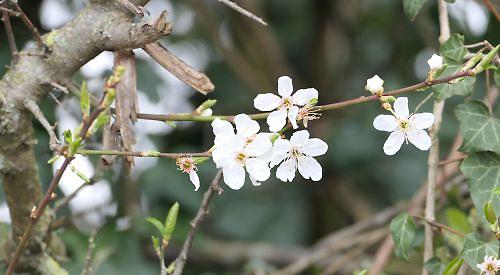 I AM awake at 5am and try to get back to sleep but it is, frankly, impossible.

I get out of bed and, as the window is open, I’m greeted by the sound of a dawn chorus initially led by a duet of a song thrush and a robin.

After a short while and as the sun rises, I go downstairs, open the back door, step outside and sit on the nearest bench to listen and watch.

Dunnocks chime in with their jingling notes, great tits sing “teacher teacher”, a wren belts out a high-pitched trill and greenfinches “dweeb” and trill too.

With a mug of hot Marmite in hand, I return to the bench to see what else I can see in the garden and am not disappointed.

I see my first marsh tit (Parus palustris) of the year feeding on a coconut shell filled with suet. A cute, diminutive bird, it sports a shiny black cap.

Then there is its close relative the willow tit (Parus montanus), which is similar in size and appearance but with a duskier, matt cap and a pale panel on its secondary wing feathers.

When it goes, a coal tit (Parus ater) arrives and tucks into all sorts of food on offer in our woodland garden.

Blue tits, a pair of long-tailed tits and a lone blackcap feed too. Goldfinches, blackbirds, magpies, jackdaws and woodpigeons fly hither and thither, two collared doves sit cooing in one of our trees, mewing red kites wheel about and starlings chatter.

Then a jay storms in, wrecking our early morning party and has a stand-off with a magpie. Most entertaining.

Our robin — we call him Fred — seems to have found a mate that we’ve named Flossie (his floozie no less) so we decide to provide a nesting box for the two of them and locate it where we’ll hopefully be able to watch them raise their young from the rear windows of our house.

It is a fine, bright morning so Rosemary and I take advantage of the better weather and indulge in a gardening spree. Our newly acquired wild service tree is the first to be planted in a sunny glade with a tree guard that our friend Dave Kenny kindly gave us.

In another clearing we install purple-loosestrife (Lythrum salicaria) and dark mullein (Verbascum nigrum), both tall-stemmed flowers so we hope for a bold display a few months on. We place broad buckler ferns (Dryopteris dilatata) in shadier places.

The next morning I’m delighted to hear a chiffchaff (Phylloscopus collybita), my first of the year and one of the earliest migrant birds to arrive having flown all the way from southern Europe or north Africa. Some may overwinter but I’m thrilled to hear its notes nonetheless.

The next day we rise early and take advantage of the fact that it is not raining and sally forth.

We park outside St Nicholas’ Church in Remenham to take a brief stroll up Remenham Church Lane. We last visited this area in January and we’re keen to examine nature’s progress. Things have moved on indeed.

Below the churchyard’s wall red dead-nettle (Lamium purpureum) displays early pinky-purple flowers and as we walk along the steeply ascending lane we look closely at a tall mossy bank to our right that is full of emergent flowering plants, including some lovely common dog-violets (Viola riviniana). The fresh, green and occasionally dark spotted leaves of lords-and-ladies (Arum maculatum) are surging out of the near vertical slope.

Reaching the lane’s crest, we are treated to the spectacle of the densely packed, yellow flowers of Oregon-grape (Mahonia aquifolium) by the side of an old gravel pit. A native of western North America, it is now naturalised.

A blackthorn is still in full flower as we walk along the narrow road and we spot the intricately formed leaves of highly poisonous hemlock (Conium maculatum), an umbellifer, growing under the yellow-lichen covered twigs of the hedgerow. Blackbirds and robins appear to be looking for nesting sites.

We turn right by an old oak into Rosemary’s favourite field. She had informed me of the presence of skylarks (Alauda arvensis) here at the start of the year and we did see and hear one back then.

They are certainly present in this wide-open expanse today and in stunning numbers. I love the way that the males start to sing their joyous, unique and unforgettable song from low down and ascend to great heights, fluttering like giant moths high in the sky for minute after minute before abruptly plummeting rapidly into the now fresh green shoots of winter wheat or barley and scuttling off to rise again elsewhere.

There are a great number of red kites here, too, many on the ground presumably seeking insects, earthworms or anything else handy. Others seem to just have fun twisting and turning in the strong breeze to reveal the glorious colours of wing and tail.

We enter the northern end of Remenham Wood, another of Rosemary’s favoured spots, which features some 10 species of native trees including some old beech, field maple, ash and goat willow.

We turn back as we’re hungry and decide to end our walk in the warmth of the Flower Pot at Aston.

As we near the woodland’s end and re-enter the high and breezy open country, Rosemary points out a grove of four yew trees that she calls “family tree” — father, mother, daughter and son. Her brother appears to be making a desperate attempt to escape as the tree leans at an acute angle.

Back home we place the open-fronted robin box about 5ft up in a maple in the back garden and hope that the birds will like it. The pond is already full of frogspawn but a male frog keeps croaking — is there no end to his ardour?

Thinking back to the bounty of skylarks that we’d seen, I remember my maternal grandfather telling me years ago that when he was a young boy (100 years or more ago) a pair would nest in the corner of the recreation ground next to his parental home and father’s grocer’s shop in Westfield Road, Caversham.

A large patch of grass was left uncut for them. I can’t imagine anything like that being possible these days with all the traffic, noise and urban pollution, let alone a reliable food source, but an enchanting piece of history nonetheless.

After sunset a beautiful full moon graces the night sky, shining bright. Every so often an occasional cloud scuds past. Without our satellite we would not be here at all. Makes you think, doesn’t it?