’Little green aliens’ and other wonders in this peaceful woodland 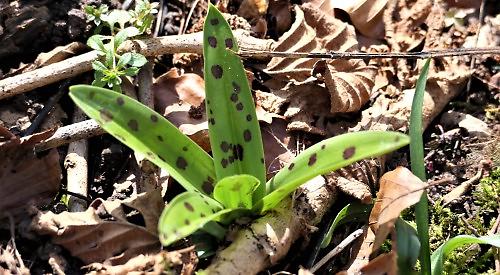 WE are living in scary times. Who knows how the coronavirus crisis will pan out?

Pubs and restaurants have closed and we have been told that no more than two people can meet.

In the days, weeks and months to come, Rosemary and I will still get out once a day unless we are eventually forbidden to do so.

We’ll take our own lunch and maintain a cautious distance from other people as the Government has advised.

We simply cannot stay holed up and suffer from cabin fever but we’ll be wise. Thank God we have each other. Unfortunately, our wedding plans are now on hold.

As the weather is fine today, we decide to visit some local woods of my choosing.

Before we leave, I am standing outside the back door when a male blackcap (Sylvia atricapilla) arrives and sings his lyrical, rambling warble in the depths of the back garden.

Rosemary hears it too, so maybe our lonesome female has found a mate.

It’s another sign of spring’s arrival and a lovely thing to hear.

A green woodpecker (Picus viridis) yaffles in our giant fir (Abies grandis) and another responds from afar.

We leave Caversham, head up the Woodcote road and take a left turn towards Mapledurham and Goring Heath by the Pack Saddle pub.

Rosemary drives along the old, twisty, undulating road and we leave the car opposite the much missed and once charming King Charles’ Head.

Long ago, this former pub was always a favourite destination after a few hours’ walking.

We enter Gutteridge’s Wood along an old footpath that leads through beech woodland with holly, oak and cherry.

The trees at the woodland’s edge display wind-affected characteristics. There are some old silver birches here and a few small trees that I can’t identify through their bark or shape. I’ll need to see their leaves later to satisfy my curiosity.

Reaching the bottom of the valley, we enter Thicket Copse, which is composed mainly of old, once coppiced ash and hazel.

I intend to introduce Rosemary to a small spot where many years ago I stumbled upon the largest colony of early purple orchids (Orchis mascula) that I have ever encountered.

They grow on a flinty, moss-covered part of the wood, the flints apparently dumped en-masse at the end of the last ice age.

As we cautiously enter this special place, Rosemary is quite taken by the mosses that nearly overwhelm a raft of ash saplings.

The moss creeps up the whips that she observes resemble “little green aliens” and also covers every fallen twig or branch. We’re walking through a micro-climate.

I spot the shiny purple-spotted leaves that form a rosette beside my feet. Rosemary spots another and another. Great — there may even be 100. There will be many in flower soon and what a sight they’ll be.

We exit gingerly to the north so as not to accidentally crush any of the orchids and make our way through Nuney Copse onwards towards Nuney Green.

As we climb the gentle incline, a chiffchaff chiffs and chaffs. Two yellow brimstone butterflies (Gonepteryx rhamni) appear to be playing kiss-chase. They hardly ever settle so they are very difficult to capture on camera.

Another reminder of spring, their caterpillars’ food plant is buckthorn (Rhamnus).

We meet the narrow lane at Nuney Green but save a walk into and beyond the hamlet for another day and instead head southwards with stony Nuney Wood to our left. I have not walked through it for many years.

The roadside banks glow in the sunshine, covered in mosses, wood melick and dog’s mercury.

To our right a stand of douglas fir (Pseudotsuga menziesii) is home to goldcrests (Regulus regulus) that are singing their sweet, tinkly songs.

As the lane meets the bottom of a small valley, I lead Rosemary off to our left to show her another favourite place of mine.

We walk through a comparatively young beech wood, crunching on last autumn’s fallen leaves where a once clear path snaked through the trees. It is no longer visible but I remember the way.

The bare canopy thins out to reveal a sunlit glade full of primroses shining amid last year’s yellowed grasses.

To the left wild service trees (Sorbus torminalis) and whitebeam (Sorbus aria) are abundant on an old earthwork boundary that forms a dense palisade. A super, sunny spot.

We leave the beech wood and move on to regain the narrow lane and head up to a junction that will take us back to the car.

Cherry trees will blossom soon and after a brief flowering the petals will float down like confetti.

I love the striated bark on the trunks that makes these trees readily identifiable. Some grow like pillars not dissimilar to our giant fir, the trunks of which have been widely used as ship’s masts and flagpoles.

We pass so many vehicles that I’m astonished. I have never seen so many families and dog walkers out here before. This may stop now, of course.

On our walk we gave a wide berth to the few people that we spotted in the interior.

In my experience, most people only venture about 30 yards from their vehicles.

We drive home and receive delivery of three lady ferns (Athyrium filix-femina) to add to our collection. They can grow more than 3ft high and wide. Deciduous they may be, but they have wonderful light-green fronds in summer.

We’ll also be placing some smaller polypody (Polypodium vulgare), another distinctive native, among our shady patches.

The front doorbell sounds and I take delivery of an engagement ring for Rosemary and a beauty it is too.

If it had not been for the Henley Standard we would probably never have met so I am eternally grateful to the editor. Thanks, Simon.