While humanity struggles in crisis, nature will always find a way 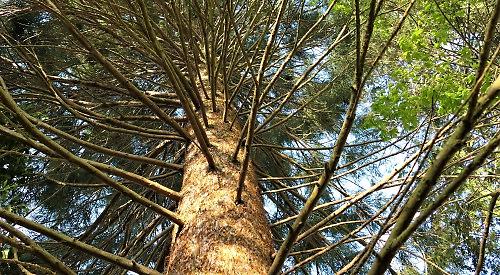 AT the moment all of us are, sadly, restricted as to our movement. Despite our joint yearning to explore the outdoors, Rosemary and I are now staying put at home. I only venture out for medicine and foodstuff.

Being “locked down” is a most extraordinary experience, as I am sure all of us can attest.

In the light of this, I thought I’d take the opportunity to take you on a tour of our garden and describe what we see, hear and observe.

Without the noise of much traffic on the road and aircraft largely absent from our skies, birdsong has become loud and clear, especially at dawn and dusk.

Blackbirds have largely replaced the melancholy repetitive notes of our songthrush, now superseded by the sound of an avian Caruso. Our male blackcaps are going for it in a frenzy, chiffchaffs relentless. I hear the softly descending cadence of a willow warbler. Superb.

The buzzing of bees is tangible. It has become almost possible to hear the “slurp” of a butterfly as it tanks up on nectar from an early flowering plant.

Rosemary discovered a bumblebee in some distress on a bedroom floor. The poor thing was looking decidedly worse for wear, so she kindly gathered it up, took it outside and presented it with a spoonful of Manuka honey. The lucky and surprised insect proceeded to gorge itself on this unexpected gift, made a bee “burp” and flew off resurrected. Wow.

Later we decided to release some ferns from the confines of plastic pots and planted them next to their relatives in a shady area of the garden.

As we dug some small holes, our robin Fred turned up — not, I hasten to add, unexpectedly.

No sooner had the garden hose been turned on he proceeded to take a shower in a most ostentatious manner. The front garden is home to an elegant Monterey pine (Pinus radiata), a species with an interesting history.

From California, the tree is notable not just for its bright green and slightly yellowish needles but for the fact that it will only release its seeds after a “bush fire”. Its taller neighbour is a Bhutan pine (Pinus wallichiana), a native of the Himalayas with droopy bluish needles.

A small Japanese white pine (Pinus parviflora “glauca”) — famously depicted in the blue and white willow pattern crockery — stands to one side.

Further in and next to the Bhutan is a Killarney strawberry tree (Arbutus unedo), a native of Ireland. The “unedo” means “I only eat one” as the fruit is generally considered unpleasant. This is a large example and popular with nesting birds.

When I lived in Portugal, my friends would make a preserve of the fruit, which was moderately popular.

Alongside are three large yellow-flowered shrubs, Mahonia x media hybrids, hope, charity and Buckland. These are of vital importance to insects over the winter months as they provide much-needed nectar. They have been known to be in flower on Christmas Day.

Then is a large, dark green holly bush while a mimosa, or silver wattle (Acacia dealbata), completes the overall dendrological picture.

In the depths below a broad spread of rose-of-sharon (Hypericum calycinum) provides the cushion and cover for a robin’s nest. Are Fred, our gardening pal, and Flossie, his significant other raising their young?

Below lies a juniper (Juniperus x media Carbery gold) and a Poncirus trifoliate, or trifoliate orange, with stunning white blooms and vicious thorns.

Earthenware pots are host to various daphnes and fragrant sages that are coming into flower.

The first thing to note about the back garden is the volume and variety of smooth Japanese maple (Acer palmatum).

I’ll deliberately postpone describing them this week as I need to sit down and cross-reference my records. It is an impressive collection.

Our pond is also host to some marginal flowering beauties and full of tadpoles.

Stepping out of the back door, I look to my right and see a row of large maturing maple trees. Covered with dainty florets, they are coming into leaf — Acer cappadocicum “rubrum”, from the Hindu Kush, and two cultivars of Norway maple (Acer platanoides), Crimson King and variegated Drummondii.

To the left is a bird-sown rowan tree, dogwood, hawthorn and a glorious sycamore (Acer pseudoplatanus), a cultivar “brilliantissimum” already adorned with beautiful peach-coloured leaves.

A wonderful twisting path leads into the middle section of the garden where these is a paper bark maple (Acer griseum). A monkey puzzle (Araucaria araucana) originally from Chile and Argentina, stands robust, prickly and although only about 10ft tall, impressive.

A pair of great tits have a noisy brood raised in a hole in a long-dead large cherry tree that these days is propped up by an athletic, spartan oak.

There are so many insects about. I will need time to properly identify them all. From hoverfly to leaf-cutter bee and strikingly coloured bumblebees. I’ll report later.

In the morning I found another invertebrate casualty in the downstairs toilet, upside down and waving its legs in desperation. A May-bug or cockchafer, I released it.

Walking down the inviting garden path, I have to ask Rosemary what species of tree stands before me.

In the evening we stand outside and gaze at the stars. Rosemary points out some pipistrelle bats that weave about above in their search for insect prey.

A large noctule bat whizzes overhead at breakneck speed in pursuit of moths. We take in the brief serenity afforded us. There may be huge problems for humanity during these difficult days but nature will always find a way.