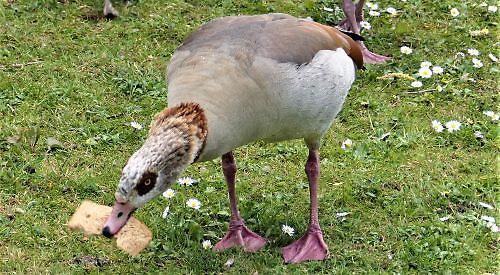 IT is early morning, light and bright. I know that it is 6.30am as the radio has just burst into life and woken us up.

From the garden a blackcap and a blackbird sing.

We rise, open the curtains, shower, go downstairs, provide our cat Cilla with some food and consume an early breakfast.

Then we head off to Sonning Eye. Rosemary is determined that I see the confluence of St Patrick’s Stream and the River Thames.

We attempted this walk a while back along a then muddy path and were foiled by a fallen tree that blocked our progress.

Today all has changed. After crossing over the Thames from Oxfordshire into Berkshire via Sonning’s ancient Bridge, we follow the now dry riverside path. After passing Shiplake Court, which bears some eccentric exterior signage and a frankly odd riverside sculptural installation, two Canada geese fly past honking loudly as if some impending disaster is looming.

Across the water, the toothed leaves of a small plantation of hybrid black-poplars rattle in the wind.

As we head north east, the flat land to our right is sublime. Just over a wire fence we spot a large variety of grasses that include creeping soft-grass, barren brome, soft brome and timothy. Meadow buttercups stand in vast swathes. Cows graze in the distance.

Far beyond, the deeply wooded slopes of both Bowsey and Ashley hills can be seen, two lovely landmarks and great for navigation if you do not possess a compass. I have two.

There are some very productive sweet chestnuts on Bowsey’s crest so we’ll be going there come autumn to gather a small harvest. I like them raw. They are also superb for integrating into stuffing at Christmas time.

There are some deep, dense reed beds by the river’s edge. We hear the song of a reed bunting (Emberiza Schoeniclus). The notes are quite distinctive and jerky. We see him. He has an unmistakable appearance with his black head and white neck ring. A welcome sight.

Across the river a cuckoo calls from a group of small alder trees. It has to be the same individual that we heard only a week or so ago. It is wonderful to hear him once more. A herring gull floats on the water looking bored.

As we progress, comfrey grows in abundance on the marshy ground, common reed and great reedmace or bulrush beyond, a near mimic of the Oxfordshire bank.

We marvel at the vast gatherings of damselflies and mayflies. There are thousands of them in flight.

Many low-flying, chattering swallows dart about picking off food on the wing. Sometimes they have flown around my ankles as I’ve disturbed insects walking through long-grassed meadows. They will get that near, fearless and a wonder to see close up.

We move along the narrow path. Thankfully, the previous woody barrier has been removed and we can see our target only a few hundred yards away. Underfoot the small but pretty flowers of dove’s-foot crane’s-bill and herb-Robert attract small insects. Yellow flowered charlock abounds.

We reach the stream. It is glorious. The water flows over a small, old weir, which must be here for a reason but I don’t know what that is.

I sit down on a wonderfully positioned tree stump and take in the surroundings as Rosemary explores a meadow, once wooded.

The water is as good as it gets and the picture that I see before me sublime. It must have looked this way for centuries. I could sit here all day and we will be back, I’m sure.

After digesting this timeless prospect, we return with no great haste to Sonning Eye as we have time to spare and take everything in from a new angle.

A male mandarin duck sits on a stout willow branch and yellow iris glows. What a splendid walk it has been but we are not finished yet.

When we reach our starting point we decide to investigate the gravel pits that are home to Reading Sailing Club and fished by members of the Reading and District Angling Association.

I don’t know what to expect but can say that our walk’s conclusion will be well worth it.

A gentle, level path leads us along the vast expanse of the pit’s edge. It would be so easy to lose yourself here.

In a way it is a shame that so much pasture has been lost to gravel extraction for motorway construction. One only has to look at current and past local Ordnance Survey maps to see how much land has been relinquished for roadbuilding and the process continues to this day.

Driving back to Caversham, there is a constant caravan of trucks flowing from the new quarry just past the Flowing Spring pub. Nevertheless this is a rather special place. Apart from the grinding sounds of yet more extraction from the direction of Playhatch, there is much birdsong and plenty of wildlife about.

An unofficial path leads us to the sailing club. A closely clipped and unnaturally large lawn runs to the water’s edge. We approach the pit’s lip.

A pair of Egyptian geese demand food as they shepherd their youngsters. They are fed as, naturally, Rosemary has a burgeoning parcel of food in her holdall. I’m sure that they recognise her. It is the same story everywhere.

Whitethroats, blackcaps and reed warblers vocalise. I simply love this brief but lovely time of year. The migrants announce that summer’s warmth and embrace is truly here.

A stunning line of white poplars grace the large pit’s shore, an endless line of shimmering, quivering leaves that flash their white undersides as if for fun.

This is a tough species and often spreads through suckers. These trees are also host to many insect species, including the goat moth whose larvae will eat the wood. It is quite amazing to think that so many species of trees can support such an array of insects that provide a rich food source for birds.

The path leads on. Along the way we note the flowers of white campion and wood speedwell. Looking across the river, I recognise the opposite bank. It is somewhat odd to see it from another aspect.

There is a huge array of insects here: beetles, flies, butterflies, bees and wasps. Up close some are quite beautiful, some grotesque. They are all important, of course, as the more diverse our natural environment the healthier it is.

Looking studiously at flowerheads, we can see some little beauties. A soldier beetle (Cantharis livida) is making the most of his small world as he peers over a leaf. His cousin Cantharis rustica hunts below. We also spot an orangey-red cardinal beetle.

A small white butterfly rests on a nettle leaf, a shiny and black woodlouse crawls in the vegetation below.

A honey bee feeds on wild angelica and a strange looking little bee tucks into a buttercup flower.

Many of these little fellows are easily overlooked. If you have a minute to spare take the time to take a close look at flowers and their attendant insects, anything from a common or oxeye daisy. Umbellifers such as cow parsley, hogweed and hemlock are particularly fruitful plants to inspect. They are all insect magnets.

A bright, shiny green dragonfly flits past and rests briefly on a leaf. I think that it is Somatochlora metallica but can’t be sure.

I can’t quite put my finger on it but I’m living such a fun and enjoyable life these days. I believe that it is all down to Rosemary and our shared love of nature.

I am reminded of the final refrain of a Bob Dylan song.