Rare or common, orchids are beautiful and I can’t get enough of them 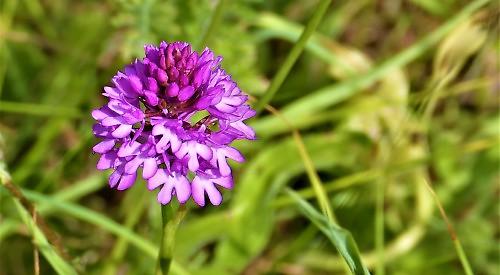 IF you have an interest in British wild orchids then late May and the whole of June are the best months of the year to see most species.

I explore and search for our natives in spring, summer and autumn. They can be unusual, handsome and occasionally freakish-looking flowering plants.

Most will be in bloom right now. Others will appear in July, some later, but now is the time to get out and about to see, discover and admire most of them.

Rosemary and I decide to go on a blitz to see what we can discover or, mostly in my case, rediscover. We pack lunch and off we go.

Our first foray takes us to a part of South Oxfordshire. After stopping off to see some late-flowering early purple orchids (Orchis mascula), we stumble upon some peculiar bird’s-nest orchids (Neottia nidus-avis). These are easily missed as the plant has no chlorophyll. It parasitizes fungal hyphae and due to its colouration blends in with fallen, brown beech leaves.

We move on across a valley and scramble through some thorny scrub to examine some fly orchids (Ophrys insectifera).

I came across this small colony last year. The stalks are rather wispy with very slender, sagging leaves. The flowers have taut green sepals. The upper slim velvet-like petals resemble antennae. The lip is elongated, a rich, fleecy dark brown with a shining blue, intense speculum.

This plant can also be easily overlooked as it blends deftly into its surroundings. This species of orchid is able to induce pollination through cunning means as it possesses a plan like a botanical Baldrick.

The flowers are diagnostic and resemble a species of small wasp (Argogorytes mystaceus) that fool the male to pseudocopulate as the flower’s appearance is so convincing. Presumably some scent is also involved. As wasps move from plant to plant, they pollinate unknowingly.

I wonder how this relationship evolved? Such are the mysteries of nature.

To the side of these intriguing fly orchids I note the presence of some emergent narrow-lipped helleborines (Epipactis leptochila) that will show their faces soon. The flowers can be told from other Epipactis species by their very pointed sepals and petals. The leaves are floppy. Both plants are scarce nationally so it’s a pleasure to see them and a good start to the day.

A raven (Corvus corax) croaks loudly. We don’t see him as he’s high up in the trees but his voice is unmistakeable, so resonant, deep and powerful that distinguishes it from other members of the crow family. It is the largest passerine or perching bird. This species seems to be getting more common in these parts of late.

We then pay a visit to Hurley Chalk Pit, a nature reserve managed by the Berkshire, Buckinghamshire and Oxfordshire Wildlife Trust.

We take a good look around and there is much to see. Common milkwort with its small but bright blue flowers shares the ground with tormentil, common rock-rose and carline thistle that will flower come July.

In the deeper shade under beech trees we find a large colony of white helleborine (Cephalanthera damasonium), another occasionally frequent but very local plant and handsome too.

They bear near pure-white flowers that are akin to tiny boiled eggs. If you peer inside the yellow lip is visible. Always pointing upright, they do not fully open and are largely self-pollinated, although sometimes visited by a passing solitary bee that will always help increasing biological diversity.

After renegotiating the long, narrow path back to our car we stop for a breather. We have passed an interesting array of trees and flowering plants. The leaves of glorious whitebeams flutter in the breeze, green above, chalky-white below.

We are going for it “big time” today as the majority of the orchid season is short and, being in possession of permits to visit Swain’s Wood (also managed by BBOWT), we head off towards Nettlebed and beyond.

It is a lovely drive. The beech trees are a full, fresh green. Cow parsley, hogweed and hemlock enlighten the roadsides with the occasional foxglove and red and white campions thrown in for good measure.

After passing through Turville Heath, with its wonderful avenue of common limes, and approaching Northend, the road signs become a little confusing but we work it out. We take a right, then another and head down Holloway Lane that eventually leads to Turville. We park in a small layby. There are no other cars about. We walk down a steep slope through the entrance into the nature reserve.

A solid barrier is visible ahead, bathed in sunlight. For me, this is akin to being readmitted into the Garden of Eden, for Rosemary something new and exciting. As we reach the first of two gates, the view from the open meadow is tremendous with a wood to the west. It is not very often that it is possible to gaze down on woodland canopy but that is what we are doing, we are so high up. It feels strange, almost as if we are in a hot-air balloon. We are presented with a fantastic vantage point to scan the landscape.

As I examine the ground, Rosemary shouts “stop” as there is an orchid a few feet from my left boot.

It is a pyramidal (Anacamptis pyramidalis), one the most common in the Chilterns and always a sign of a healthy environment. The flowers on this plant are a rich, deep pink colour that glow under the sun. In the past I have encountered pure white flowers (at Bix), which are uncommon.

Further on, we encounter fragrant orchids (Gymnadenia conopsea) in their masses. The flowers vary in colour from deep pink to pure white.

According to a recently acquired book, Britain’s Orchids, published by Wild Guides and written by David Lang, this species is variable and “exists in three distinct forms”. I didn’t know that.

I spot my prize, a military orchid (Orchis militaris) standing in full splendour. Rosemary is disappointed as she seems to like a man in uniform and finds them somewhat lacking.

Considered extinct in the Thirties and then rediscovered in Buckinghamshire in the late Forties, it is a rather stout and bullish native but glorious, too, displaying pinkish flowers with purple spots in the centre of the lip.

We also find some greater butterfly orchids (Platanthera chlorantha), differentiated from the lesser (Platanthera bifolia) by the divergent pollinia and lax sepals. The flowers are candle-white, exquisitely night-scented and luminous. Both can be found at BBOWT’s Warburg reserve, near Bix, which is always worth a visit.

Common spotted orchids (Dactylorhiza fuchsii) are abundant. Very robust and pleasing to the eye, they grace the grassland with their intricately patterned labella.

After lunch I direct Rosemary to another BBOWT reserve, Hartslock, which sits on a very steep hillside near Gatehampton, just south of Goring.

There is a substantial climb to gain the crest. On our ascent we meet a beautiful columbine (Aquilegia vulgaris) with resplendent rose-tinted flowers. I’m hoping to show Rosemary the monkey orchids (Orchis simia) that grow here and the hybrids with the lady orchid (Orchis purpurata). Unfortunately, they have already flowered and gone over.

I don’t know quite why but so many of these charming plants seem to be flowering earlier than usual. Is it down to climate change?

Still, this is a lovely place and at the dizzy summit we are awarded splendid views over the famous Goring Gap and River Thames. Chalk milkwort (Polygala calcarea) with its bright blue, small flowers lie at our feet, bird’s-foot-trefoil abounds.

Church Farm with its church looks like something out of a film set. Why is there a church — was this once a village? At the base of the reserve we find a huge carpet of yellow-rattle (Rhinanthus minor), a semi-parasitic plant, among the wonderfully swaying grassland, caressed by a breeze. When the seeds ripen they rattle in large fruit capsules, hence the name.

Oxeye daisies thrive, stout species of thistles will soon be in flower and perforate St John’s-wort is bursting into yellow flower. The scent of wild marjoram, a wonderful herb that is ubiquitous here, is constant. Insects of every description fly, crawl or flutter. This is a wonderful place.

As we leave the reserve, we size up the landscape. It is dramatic with its rolling hills. Much of the rising land between Gatehampton Manor and Upper Gatehampton Farm is now “open access”, running mainly to grassland. Within there are inviting, small copses at about the 100m mark. This land demands a visit soon.

As we return to our car, buckthorn and elder line our path. Greater burdock with huge leaves and nipplewort with small yellow flowers bejewel the side of the lane. Across the river Lardon Chase beckons atop the opposing hillside. Can we fit all this in? Yes, we can and will.

A lasting impression from today is how clever the natural world is. Adaptations to soil and slope, the interactions between plants, insects, mammals and birds, the jostling for position and sunlight.

Wow, what a day. We head home. Time for supper and an early night we think and then, what may tomorrow hold?

We’ll be back to sit at the top of Hartslock when there is a full moon on a midsummer evening. We can’t wait.