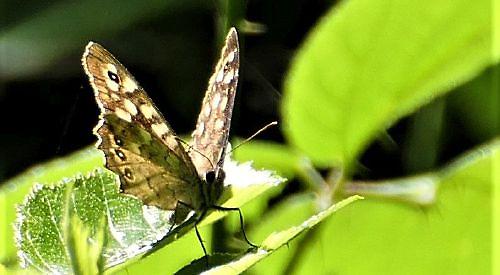 EARLY in the morning we take a stroll in our garden led by our feline expert tour guide Cilla.

She leads us along our serpentine woodland paths. She likes to flatten our little sanicle. We wonder why.

A good friend, Maria Castelo-Edge, recently gave us six fine ferns, male and hart’s-tongue. I planted them. A quick tally makes that about 60 installed over the last fortnight. They’re looking good and we’ve had no casualties.

The doorbell rings. We take delivery of a brace of common valerian, which we will plant later. They look very healthy, a treat.

The native hedgerow is settling in well and a recently acquired wayfaring tree has bedded in nicely alongside a fit and sturdy beech about 40ft from our garden’s end.

Some work has to be done right at the back. We’ve been hacking at the unwanted intrusion of cherry laurel from one side which, combined with a deep and historical pile of old branches, means we are going to have to get our gardener friend James Taylor to bring in a wood chipper.

We’ll distribute the chippings on our paths, nothing wasted, recycled. This exercise will probably encourage fungus which could be quite fun.

Once cleared, I’m going to construct a replica, old wooden bus shelter in the right corner, maybe with a bus stop sign. I think that would be amusing, especially if a bus turned up!

It is no surprise that we have so much wildlife in the garden as we are making a determined effort to encourage all forms of it.

We have many azure damselflies (Coenagrion puella) in both front and back gardens, maybe down to all our flowers. The black and blue abdomens resemble a thick darning needle. Green shieldbugs (Palomena prasina) wander about on the leaves of a small rhododendron.

We want to get out and agree that a walk in the cool shade of a woodland would be a good option today as my fiancée does not like hot weather. Rosemary leaves it up to me as to where we visit.

I direct her (the driver) to a gravelly lane in Highmoor that was once graced by the presence of the Dog and Duck pub, one of my all-time favourites.

Back in the Eighties it was run by Pete and Patsy Clare who had a lovely dog, Mutt. He’d guard my bicycle out the back when I went out in the woods before returning for a pint and lunch. How I miss those days.

The dear building was allowed to fall into disrepair and has now been demolished and is being replaced by twee expensive housing.

Anyway, enough lamentation, we’re off for a walk. We head first to Lower Highmoor where we will pass Merrimoles and reach Highmoor Trench. The woodland to our left, Highmoor Common Wood, is now “open access”. I’m impressed at how much land has been opened up for exploration and recreation.

Rosemary loves old trees as much as I do and I’m able to point out some stunning beeches. One trunk has the appearance of an ancient troll. She appears suitably impressed.

We arrive at the trench and head back to a woodland bridleway crossroads and head south under the tree canopy until we meet yet another crossroads. This is becoming a theme.

We turn east. To either side the path is lined with bracken, lesser stitchwort, yellow pimpernel, wood melick, hedge woundwort, enchanter’s nightshade and wood sedge.

There are several groves of yew trees present. No one really knows the lifespan of a yew but some recorded specimens are certainly over 1,000 years old. Nothing much ever grows beneath a yew but by golly when you encounter an old one it has huge presence.

A little further on we meet some large larches. They appear to be dead, maybe due to fungal canker.

I lead Rosemary to the foot of one of the tallest and oldest woodland oaks that I’ve ever encountered. It soars skywards and at about 40ft up it explodes into magnificence. The trunk is massive, roots spread out like the foot of a brontosaurus. It is glorious.

A short distance away I indicate some huge rhododendrons. Normally I despair when I come across these plants as the most common, ponticum, spreads like wildfire to the detriment of native vegetation.

These are different types and don’t dominate. I’m a little disappointed as they have already flowered and Rosemary is an expert on exotics, so next year it is then.

There are lovely open glades here where sunlight bathes the grassy paths and shines through the green undergrowth of bracken, ferns, gorse, foxgloves, hedge woundwort and grasses, illuminating and revealing true beauty.

Butterflies flit above redshank, common sorrel, through welted thistles and across buttercups but never seem to settle. Some of the most attractive are silver-washed fritillaries that seem obsessed with the pink and white flowers of brambles. It is difficult to photograph them, ever restless.

Chiffchaffs, chaffinches and song thrushes sing. I find it strange that over the last few weeks I’ve been hearing so many chaffinches in the countryside but none back home. Rosemary reports that only a few years back they were common in the garden. I wonder why and where they have gone?

Woodbine, or honeysuckle, grows high, mosses shine on the woodland floor. It really is a wonder. I love summer.

We move on and eventually break out into open country. We are warned at the gate that livestock is about. We see none.

The panorama is lovely. The grassy meadow sweeps to the south, a private road but also a bridleway. A cattle grid lies at the bottom, where it meets Rocky Lane.

This area is named Scotland and we can see why. You only have to look at a large clump of trees that surround a large pit. After a brief break for refreshment, we head eastwards and enter a broad lane over another cattle grid that heads towards yet another crossroads.

There are some elegant trees on our pathway, notably some old Scot’s pines and a pair of glorious poplars, but also one non-native that I struggle to identify. My interest has been sparked so it will be back to reference books.

We head south towards Bromsden Farm. It is tidy here but with a natural feel. The buildings are looking wonderful, the upkeep faultless, barns, house and garden lovely. Swallows dart about as we head downhill through a meadow with three subtly positioned trees, one a whitebeam, the other two coastal redwoods (Sequoia sempervirens).

After admiring the surroundings, we drop down to a delightful woodland named Tartary. I guess the name was bestowed on it by Peter Fleming, the adventurer and author, older brother of Ian, author of the James Bond novels and short stories. It is cool down here at the valley bottom. Steep banks lie to either side, widely spaced beech trees stand left and right.

The path leads westwards. The woodland is full of shuttlecock-shaped male ferns. They grow in profusion. It is very pleasant along here, the atmosphere very welcoming. We meet three women out walking friendly dogs, have a chat and then let them pass as we are taking it slowly, Rosemary clicking away on her camera, me scanning the deck as always.

After a while we burst out into unbridled sunlight once more. We are going to cross the lovely grassland of Scotland again but from a different angle. The large dip in the ground is quite substantial. We peer in. It is wide and deep, the trees up close, old. This is a unique place, so close to Henley yet feeling many miles away. We are on high ground, about 135m above sea level.

We return to the gate with the livestock warning, look back and re-enter the woodland and slowly stroll back to the car. It can be very curious retracing one’s tracks in the opposite direction as you’ll very often have missed something. I look down upon the seeding heads of spring’s bluebells and thank them for their show just a wee while back. In one of the open glades I spot some fairy flax.

We both share a love of woodland paths, especially those that are sinuous. I often wonder whether many of our present roads, with the exception of ancient tracks such as the Icknield Way and Ridgeway and anything faintly Roman were originally carved out by animals and adopted by humankind.

On returning home a dragonfly is whizzing about and a raven is croaking somewhere in our giant fir, an unmistakable throaty sound. We didn’t expect that, nor the resident jackdaws that are going bonkers at his temerity to invade their territory. They are clearly worried. I can only guess that he or she has stopped off temporarily.

I sit outside, content, beer in hand and think how lucky I’ve been over the last eight months. I recall the poem The Road Not Taken by Robert Frost and the last three lines of the final stanza:

Two roads diverged in a wood, and I —
I took the one less travelled by,
And that has made all the difference

Finally, I dedicate this column to my friend Joe Ritchie-Bennett. You will be sorely missed and not just by me. With fond and lasting memories, Vincent.