Glorious riverside wildflowers could have been arranged by a florist 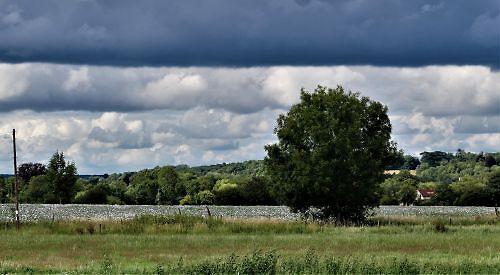 WE take a trip into Caversham in the morning and walk to the river along Promenade Road.

I lead Rosemary to the war memorial where my grandmother’s uncle’s name is carved into the stone. It reads “Hands. W.”

Bill was blown to bits in the First World War. His belt was found, nothing more. As we gaze at the inscription, we find ourselves surrounded by a large mob of geese, greylag, Egyptian and Canadian, begging to be fed. They’ve no respect for the dead, just bread.

We wander as far as the new pedestrian and cycle bridge that sits between the two road bridges.

There is a smallish, fenced off area of water here surrounded by some lovely plants in full flush, notably marsh woundwort, hemp-agrimony, white bryony and lady’s bedstraw.

A huge, now vacant, swan’s nest sits between us and the main stream. Rosemary feeds an animated moorhen.

We leave the riverbank as we have to return home for a delivery before going on our planned walk near Shiplake Lock.

We are going to retrace our steps of early February as Rosemary had told me how beautiful the meadows and riverbank are in summer.

We park in Mill Lane and walk down the lane towards the railway line, passing under the viaduct as a train heading to Henley rattles away above.

I find it sad that the line has been single track for many years. If it had been retained as double track then my former employers would have had fewer timetabling problems today.

We walk down past a stately line of London plane trees and gain the riverbank, the lock to our right. As before, we turn left towards Lower Shiplake on a path that hugs the bank. I’d forgotten how steep the drop to the water is. A wire fence to our left is apparently electrified. We decide not to find out if this is true.

Bloodsucker beetles,(they don’t suck blood) are feasting on the umbels of hogweed, a white-tailed bumblebee feeds on the bloom of a creeping thistle, its flowers a lovely lilac.

Teasels, beloved by goldfinches, are still green, but will burst into colour very shortly. One has somehow found its way into our garden.

Dark clouds appear. It rained heavily this morning but we don’t care if we get a soaking, we’re having fun.

The riverbank is an unexpected joy, beautiful flowers grow in abundance. The deeply coloured and radiant flowers on the tall spikes of purple loosestrife, the creamy white, fluffy and wonderfully scented sprays of meadowsweet, the tight, yellow, clustered and tiny flowers of Lady’s bedstraw that smell of hay. They grow together on the edge of the high riverbank and appear to have been arranged by a professional florist. A truly glorious sight.

This superb scene continues as we come across a patch of tufted vetch, which has the most incredibly deep-blue flowers that hang one-sided in the breeze.

We see the first of many cup-like flowers of yellow water lily in the shallows. As we round a bend in the river past some fishermen, the bank becomes largely tree-lined with alder, grey and crack willows.

A swathe of water dock with rust coloured flowers stands in rough pasture to our left.

Field and hedge bindweeds are in flower either side of the grassy path, the former with its pink and white blooms, the latter pure white. Bittersweet scrambles about in tall vegetation here and there.

We meet and have a brief chat about nature with a very pleasant couple who arrive from the direction of Lashbrook, where we are headed. They’ve recognised us. We say our goodbyes and move on.

We’d stopped to admire a massive grey willow and noticed some Indian balsam (Impatiens glandulifera) below the old tree. A very invasive non-native, it chokes the life out of indigenous plants and can grow very tall and fast too. It has pink flowers and snappy stems. The fruits are explosive.

Across the water there are some attractive houses and we note an Indian bean tree standing in a manicured lawn. Unlike ours, it is not in flower but is shapely. After the bankside trees thin out we come across a huge raft of great reed-mace or bulrush that stretches into the shallows.

The brown chipolata-like flower on the spike is female, atop this is a spire of male flowers, a strange contiguous, botanical design.

Masses of mugwort and marsh thistle lie to the other side of the green path. There is plenty of tall hemp-agrimony growing here. About 4ft tall, it has trifoliate leaves topped with clusters of pinkish florets.

Comfrey of various flower hues and wild angelica have just about finished flowering but are present in good numbers.

A lone, battered-looking elder tree stands windblown by the wire fence. Some small dead English elms make me forlorn for a moment. A bumblebee snacks on the flowers of marsh woundwort.

House martins skim the water and meadows in a relentless search for insects, constantly twittering. One skims mere inches above my hat and then again as we are being followed by insects. Maybe the birds are doing me a favour.

We arrive where the Lashbrook ferry was worked across to the Berkshire bank.

I sit down on a convenient bench for refreshment and Rosemary reads an information board. The ferry ceased operations around 1953 having had its origins in the late 1770s. The ferryman’s house is now a private residence.

Our riverside path ends here so after our short break we pass through a metal gate and head west into a field where we meet another gate and ascend a small wooden bridge that passes over a patch of marsh full of common reed and drop down to pass through yet another gate.

The pasture is home to a herd of dark brown cattle of standard size. It is now cowpat dodging time. The cattle are about 200 yards away but neither of us can identify the breed. The meadow is very agreeable.

As we walk along through the grass, we glance to our right at an extensive mixture of common reed, bulrush, great willowherb and hemp-agrimony that swamp a barely discernable wooden fence. This is a true floodplain.

We reach the railway line once again, pass through another gate and have to duck underneath the structure as its only about 5ft 6in from ground to metal and emerge on the other side. Rosemary thinks that if you walk underneath when a train is passing that you may get a spider down your neck,

A field lies to our left, muddy, heavily puddled by cattle. The views are broad. Private hedged properties lie to the right of a dangerously rooty path. We traverse another wooden footbridge with a large fruiting guelder rose and stroll on.

As we near the road that runs from Mill Lane to the centre of Lower Shiplake, we come across an angular, newish house on our right. It appears that the property includes a small meadow.

There are some strange flowers in the grass on the opposite side of a small stretch of water that appears to be linked to the Lash Brook. Some hazels have been planted to form a hedge over an open fence by the now gravelled path.

The water looks like pink lentil soup, it is lifeless and I can only surmise that something poisonous has run in. I’ve never seen anything like it, quite horrible.

We pass an old chapel and a little way on join the road and turn left to the west. We pass some elegant, large Edwardian villas, lovely architecture. To our left it is green, full of trees, deep and wild. We like that. We arrive at the small bridge that spans the Lash Brook.

Looking down from the middle we see a dark pool to either side. We hear a moorhen.

Moving a little further on, we stop and look at Lashbrook House care home, then drop down some steps into a little field that is a fragment of the Thames Path.

Rosemary points out a curious looking plant with small yellow flowers and pinnate, lobed leaves. It is annual wall-rocket.

There are some brilliant clumps of common poppy here too but when we pass through the next gate we’re in for a treat.

A large field to the south holds a flowering opium poppy crop presumably for the pharmaceutical industry. The flowers are a lovely diaphanous shade of pale whitish-lilac.

What makes it really special here is the fact that the field is also full of the scarlet flowers of common poppy with plenty of scented mayweed with its daisy-like flowers thrown in. To all intents and purposes, it shines like a natural stained-glass window.

The pathway that skirts the crop is lined with wall barley, pineapple weed and mugwort.

Some few hundred yards from completing our circuit, we encounter a grossly deformed common mallow, the stem thicker at the top than at the bottom with a swollen inflorescence. I believe that this is called fasciation. Very odd.

As we return to the car, I spot a patch of field horsetail (Equisetum arvense) on the east side of the road. The genus is incredibly ancient.

We have been lucky with the weather, windy but no rain. It has been a jolly good walk and we’re happy.