Evolving forest of dancing, twisted and moss-covered trees is magical 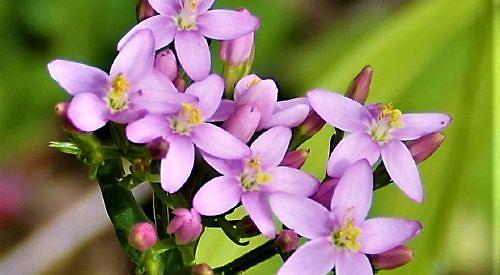 WE arise just before 7am and decide to re-visit Kingwood Common, as we’ve not been for a considerable time and want to see how it has become fully green from the tiniest flowering plants to towering trees. I’m most concerned about the health of the colony of broad-leaved helleborines that I’ve known for many years.

We set off early and take a minor road that leads in its winding way to Stoke Row. As we near our target we pass Hazel Grove that lies to our left. We turn off into a narrow lane on the right-hand side that skirts the former Grouse and Claret pub and Barn Farm and arrive close to the orchid patch which sits near to a water reservoir.

We leave the car and there they are broad-leaved helleborines (Epipactis helleborine), at least 50 of them, fit and healthy, such an important site. I’m constantly surprised at how they have survived and in such numbers. They are, as ever, protected by subtle means and are now beginning to come into flower. Splendid. I only know this plant from here and the nature reserve at Bix.

Before we move under the tree canopy we have a little scout about near to our car. There is plenty of tall pendulous sedge, small oak saplings are popping up and honeysuckle scrambles amongst the trees. I bet it smells great here when the sun goes down.

We pass the side of a metal gate and enter an open bridleway heading eastwards, Burnt Platt to our left, Greyhone Wood and Plantation lie ahead some 15 minutes away. Bracken grows tall here but does not swamp other plants. To either side of our path many flowering plants grow.

We come once more across the handsome tutsan (Hypericum androsaemum), a scarce plant in the Chilterns and sometime indicator of ancient woodland. I’m most pleased to see that there is another smaller plant in close proximity. This is most encouraging. The flowers, like other hypericums, are yellow but rather larger than the related species, the berries turning from red to black. Woodruff forms great carpets on the woodland floor.

As we move along the trail we meet a large open sunlit glade. Piles of logs from fallen trees have been sawn up and stacked to either side, an invaluable habitat for all kinds of invertebrates and fungi.

Amongst the extensive range of grass species that include loose silky-bent (which I cannot find recorded in my Flora of Oxfordshire), false brome, cock’s foot, common couch and another that I simply cannot identify. I’ll have to send a photo to a friend — she’ll know.

Meadow brown butterflies are in abundance, small whites flit hither and thither. It is charming, the sunshine filtering through the canopy like shafts of gold. Speckled wood butterflies dance in the unpolluted, clean air, a peacock sunbathes on a bramble.

After meeting two horse-riders we cross a fallen double-trunked oak that blocks our way, not that difficult for us but we wonder how the horses coped.

The tree cover is rather extraordinary. Old beech, cherry and oaks rise the highest, mosses climb their trunks. A slim silver birch stands at about 60ft, its crown of leaves forming a “pom pom” high above its decidedly etiolated trunk. Red currant grows alongside the bridleway. Hazel is sparse.

After avoiding the prickles of brambles that are decidedly inviting us for a harvest of berries in a few week’s time, (I’m thinking of a pie with cooking apples) we pass an ancient, raised boundary that is occupied by one of my beloved, incredibly formed beeches. Is it one tree, a tormented individual gone mad, or several trees fused through times’ progress?

A short distance down the now descending trail we spy a young western hemlock-spruce, an introduction but nowadays naturally regenerating locally. Rowans with their compound, pinnate leaves are already bearing deep, red clustered fruits. A lovely jelly can be made from the berries especially when combined with crab apple, which is also to be found here.

At the valley floor we reacquaint ourselves with the only specimen of wild service tree that we know from these parts. It has an indicative, brownish, plated bark, the leaves unique in shape, toothed, the basal lobes at right angles.

The fruits resemble tiny russet apples that were once used to flavour beer. The wild service tree is also known as the chequers tree so there is conjecture that there may be a real link between the tree, its fruits and a popular pub name. There is one of that nomenclature at Fingest, so who knows?

We turn into a lane that runs east to Peppard. Botanically, it has developed greatly since our last visit. Wood melick grass lines the high sides of the single-track road, beech, oak and ash provide cover.

Before we arrive at the ostentatious gates to Great David’s I spot a violet helleborine (Epipactis purpurata) on one of the banks, just the one but I’m rather taken as the plant is somewhat uncommon and wild orchids are a passion. Restricted in the main to the south Chilterns of Oxfordshire, it seems to prefer to grow on woodland edges formed of clay-with-flints, which is what we have here. I’ve normally found it growing in clumps notably at Ipsden Heath and the Warburg nature reserve, as well as under large-leaved limes near Wyfold.

As with this solitary plant the stems are purplish in colour. Unlike the easily confused broad-leaved helleborine the leaves are somewhat opposite rather than in a whorl and smaller. The flowers will show in a few weeks, at the moment just dangling one-sided buds. I’ll keep my eye on this one, trust me.

We move forward and encounter some really large ferns. they appear to be soft shield-ferns (Polystichum setiferum). We have a pair, recently planted and flourishing under an Acer palmatum in our garden — these look identical. Fern identification is a fine discipline in its own right, I can tell you, but then back home I’ve an excellent reference book to guide me in my study of these remarkable plants, I’m learning, as ever.

We follow the narrow road and are alerted by a great buzzing sound. The rear of a cottage garden is full of beehives. The honey bees must be having a wonderful time with all the wild flowers throughout the woodland and wide clearings. Supreme.

We switch direction at an obvious signposted turn to our right. We are heading into a small area of heathland. The vista changes abruptly. Last year I nearly trod on a stumpy adder in this open area, hard to spot as their colouration almost matches the shape and form of brown bracken fronds. I was challenged on my report last year but had no comeback. I would recommend that more qualified environmentalists explore. I’m only an amateur natural historian which sometimes pains me as I was pushed at school into the arts. There are none to be seen today but snakes do not give me the shivers anyway, I only fear bears, big cats and Rosemary. Just joking!

The path winds now through an increasing population of young oak and beech, bracken a translucent green below. A solitary Scot’s pine occupies a corner. We hear the songs of chiffchaff and song thrush. Perfect.

You could get lost here. Unofficial paths abound, the cover deep, inviting and mysterious. Some of the silver birch have the most staggering bark, so fissured and by turn, dark and light white. They cry out for human touch. Goat willow indicates a high water-table.

Aspen leaves rattle poetically in a gentle wind, hollies stand firm. One thing of note is the distinctive lack of hazel here, a bit of a mystery. We find a vast display of hedge woundwort. The flowers are on their last legs but the stems bear many seeds. With gratitude we harvest a few to take home to scatter amongst our burgeoning woodland garden. Maybe they will expand their range once established as they will have done historically. We stop to watch some tiny caterpillars munching on willow leaves.

The trees that surround this wonderfully winding path would look more in place on the wilds of Exmoor as they appear shaped by a prevailing wind, some in such strange forms, bestowed with lichen and moss-covered splendour, contorted, ensorcelled. This is a magical place, we both adore it.

After a short while we emerge through the tinkling aspens and past a small fruiting tree that has all the characteristics of bullace.

The paths that we’ve taken have been relatively dry which has been most welcome. They are truly beautiful as they wind between this evolving forest, I’m so grateful for nature’s wonders.

As we walk back to the car we stop for a conversation with a friendly couple. They know who we are. I’m enjoying this now.

We return home and after supper sit outside over a glass or two of wine. As we chat about today’s walk we are interrupted by a cacophony of jackdaws that seem to be doing their utmost to out-squawk each other. I’ve no idea why they do this. Even our cat Cilla looks to the trees in consternation.

Rosemary has decided that she wants a national “wort” collection. I despair, this could be a lengthy and troublesome enterprise.

Oh well, we do have fun together.