From river to common, nature is diverse and (mostly) beautiful 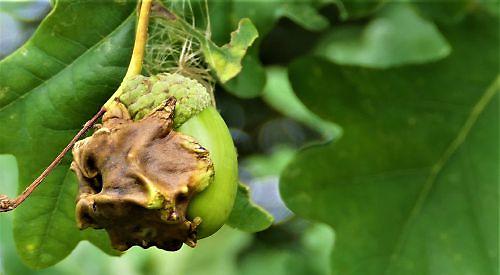 AS I write this, a young blackbird has suddenly turned up in my den/man cave, or playroom, as Rosemary would describe it.

Now the bird has flown away through an open window, unharmed but somewhat startled. What was she doing, hopping around my office? Maybe she wanted to send me a message. Rather charming nonetheless.

Maybe she will pay me another visit. Distinctly odd things happen here but they are not entirely unexpected.

I have noticed that we appear to have no resident or passing hedgehogs. They should be present as conditions are perfect for one of my favourite mammals and, after all, we have badgers, foxes, frogs, newts and several species of deer that visit our garden, so where are our spiky little pals? Rosemary thinks that the local badgers have killed them. I wonder.

Grey squirrels are a complete menace. Plant a bulb and it is dug up within a trice. I hope that our now seemingly resident raven snuffs them out. He or she is a large-beaked beauty.

We are keeping an eye on the weather forecast for the coming week as it is raining right now and we are keen to get out and about.

The rain stops and our friend Dave Kenny arrives in his car. He wants to take us on a tour of Caversham Lakes, just a short distance away.

After a whizz around our garden with Rosemary, we drive off, then park up and take our walk.

What appears to be a car park is being constructed halfway down the entrance lane that eventually leads to the advertised marina. Oh dear.

We stroll down the road towards the water. A skein of Canada geese fly past, honking.

Dave leads us through a gate on to a permissive right of way that is close to one of the lakesides. The path is green and well-tended, maybe a little too much so, but then we are free to roam and that is good enough for me.

There are signs that warn not to swim in the deep water. I wonder how deep. It looks serene.

There is private fishing here with countless “swims” carved out through the luxuriant vegetation. Two male tufted ducks bob along in the first expanse of water that we encounter.

A nice touch is the fact that our path is interrupted by many clear areas brimming with an array of flowers. We find wild strawberry, common centaury and perforate St John’s-wort, which is being pollinated by dark, shiny little beetles (Chrysolina geminata). A massive slug (Arion ater) shears a path through the lush undergrowth.

Looking at the water’s edge, we spot lesser water boatmen (Corixa punctata) and common pond skaters (Gerris lacustris), which is a good sign. The bottom is gravelly.

On the water’s edge there is a fine display of plants ranging from purple loosestrife to common reed. A coot leads two chicks through the middle.

We cross the Berry Brook that appears to be still and not flowing gently as normal. It is a lovely little stream that meets the Thames at Shiplake.

After our tour, the three of us stop off for a pint at the Waterfront Bar Café by some substantial moorings. It is quite agreeable but we are concerned that the gazebo we are sitting under may fly off in the strong breeze that has whipped up from nowhere. We depart from the ever stationary flotilla.

On our way back, we encounter a wonderful combination of ripe, dark elderberries snuggled up with the deep red fruits of a guelder rose. Dog roses hang with large hips. Dogwood is also laden. This is a bumper year food-wise for both our native birds and autumn visitors.

There are also some glorious silver birch, ash and oak trees along here, some close to the water’s edge.

Many of the oaks are host to knopper galls created by the gall wasp (Andricus quercuscalicis) on the acorns. Ugly looking monstrosities they are too, all brown and somewhat mangled in appearance. Often the adult wasps will take up to four years to emerge. There must be a reason for this.

Sunlight shines through some golden sycamore leaves. Large, white-flowered bindweed looks exquisite. Dave explains that the lakeside trees were saved from being felled during the time of the gravel extraction. They certainly add to the beauty of these lovely expanses of water.

Along our mini-trek back to Dave’s car we spot some scarlet pimpernel and a speckled wood butterfly taking a rest. We all have to do that.

Dave drops us off home. It is such a bright day, although still windy, so we decide to visit Peppard Common after lunch. Rosemary has not been to the common before, which surprises me but now I have an opportunity to open up a small portion of our lovely inheritance to her.

We stop off near the local shop and bus stop on the road that leads onwards to Kingwood.

We enter a wooded section full of oak, cherry, hazel, honeysuckle, hawthorn, crab apple and holly and then emerge into a vast sunlit glade.

I will never forget the first time I was introduced to this tiny, precious and rare fragment of Chiltern heathland. I must have been only seven years old. I often think that this is what originally sparked my love of the natural world during a childhood picnic. How I yearn for those early days.

Today, the area has lost none of its charm, as beautiful as ever and laden with plants that I identify for Rosemary.

Firstly, we encounter some broad spreads of heather (Calluna vulgaris), which is uncommon in Oxfordshire. Gorse (Ulex europaeus) is scattered about. Mature and sapling oak trees dot the open land, old boundaries reveal themselves. Hawthorn is fruiting above patches of bracken and rosebay willowherb (Chamerion angustifolium).

We move to where the land dips towards the aptly named Stony Bottom.

My intention is to show Rosemary a swathe of common knapweed (Centaurea nigra) that normally fills the slope. Unfortunately, there is none as the hillside has been scalped so we make our way back along another sloping track and head to the car.

Rosemary drives round to the northern side of the common and parks by the Red Lion pub. It is much more open here and breezy too.

Once again, we come across some tree-lined pits that seem to have been dug for flint. Rosemary finds some stones that have been partially knapped and maybe discarded for some reason thousands of years ago. It is obvious that humankind has lived here for a very long time.

For some reason, a lot of cut vegetation, including grass cuttings, has been dumped to the side of tree boles. This is a poor move and could kill the trees over time. I’m coming back with a garden fork to rectify this.

We find a large patch full of common restharrow (Ononis repens) with its beautifully shaped pink flowers. I believe that it may have acquired its name as the woody creeping roots would halt old-fashioned farm machinery. It only grows on chalky soils.

There is a good head of harebell too. The flowers are a distinct sky-blue colour and are forever waving in the wind.

At last I spot some common knapweed with its lovely reddish florets. How I love these old and intriguing names for plants. Perforate St John’s-wort, with its pale, yellow flowers, is still blooming, bees attendant.

Rosemary finds a seven-spot ladybird on a silver birch leaf. These are such useful insects as the larvae devour fantastic amounts of aphids. At home we leave this onerous task to blue tits.

A strange looking fungus is growing on an oak bough. We spot a small heath butterfly. Great.

Along this part of the common ditches have been constructed, presumably to deter “travellers” from setting up temporary camps.

We pass a stunning house that has featured in the Inspector Morse television series and in Howards End, the 1992 film based on the 1910 novel by E M Forster and starring Anthony Hopkins and Emma Thompson, among others. A residence and situation to die for.

We traverse a ditch to inspect a large clump of flowers that turns out to be yarrow (Achillea millefolium) with its wonderfully scented-white florets. A foxglove is in flower, so late for this biennial.

We notice a path close by that I have never taken. It is rather pleasant and leads into a delightful, youngish woodland.

We spot a healthy looking muntjac deer nibbling on the undergrowth. He or she appears to be eating mosses. These deer, originally from China, are very common around here now and can be responsible for much damage to our woodlands but they are cute to look at. I love their eyes.

Eventually the little deer spots us and moves off in no apparent hurry. Maybe we were not perceived as a threat.

We cross the common once more, take in the views and wade through the long grass full of grasshoppers and head back home. Another great and diverse day, lovely.

Rosemary’s father, Arne, was a Norwegian so I have just acquired a book entitled Norwegian Tutor, Grammar and Vocabulary Workbook, so hopefully the two of us will be able to converse about anything soon in the Scandinavian tongue when we are out and about. That should be fun.