Golden days of September outdoors and a pair of personal treasures 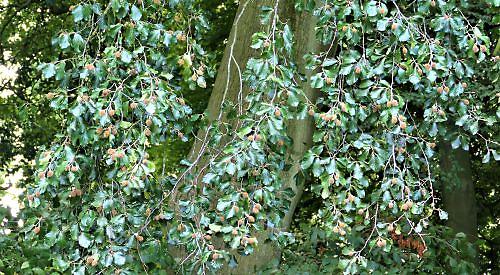 IT is a fair morning this September day. As ever, we are eager to get out into the country.

I suggest that we travel to Yewtree Brow by Garsons Farm and Hill, near Ipsden, so we do.

It is a pleasant drive. We pass the Black Horse pub at Scot’s Common along a narrow lane and negotiate a crossroads by Three Corner Common, where Rosemary drives straight across and then takes the first left to park up near the farm, which is now a shop and café called Blue Tin Produce. It is located at Keepers Cottage.

We intend to go in as the sausages are now famous locally but there is such a queue that we decide to return later in the week (the business is closed on Monday and Tuesday).

We still stop for an informative conversation with one of the customers, who is a Henley Standard reader.

In some fields cows and their calves appear to be sunbathing and look content. I’d wager that our cat is doing the same back home. There is also a large black bull.

A short way down the single-track road the views across to the Berkshire Downs are splendid. Today we can spy the remnants of Didcot power station in the distance before entering some woodland to our left.

There are plenty of dog roses up here on the hill brow, all dripping with hips. Hawthorns are laden with fruit, too, as are several elders.

This is one of those years when every tree and bush seems intent on producing a bumper harvest. It is so colourful and an engaging sight.

Small balsam (Impatiens parviflora) lines our path. It obviously does not mind the shade and bears dainty yellow flowers. It is another naturalised foreign plant but attractive and not as invasive as Indian balsam, masses of which grow on the riverbank south of Henley’s Marsh Lock.

Bittersweet (Solanum dulcamara) is in flower and bearing scarlet, poisonous berries, as is lords-and-ladies. Wood avens is scattered about together with the occasional daisy, buttercup and dandelion.

Ancient beech (some extraordinarily shaped), oak and cherry trees tower all around us.

An aged silver birch with a striking trunk lurks in the background.

A grove of mature yew trees forms a dark, almost designed circle, looking for all the world like they are conversing. Maybe that’s why it’s called Yewtree Brow.

Not much grows beneath a yew but they are handsome trees and form a welcome component of our south Chiltern landscape. I like them, especially when they are bearing their bright red berries.

We turn right, where there is a public footpath crossroads across the bridleway, slip over a rather steep boundary and enter what looks like a woodland glade.

In fact, this is one of the only currently worked coppices that I know of. Rosemary looks astonished but I had promised her something wondrous.

As we enter, I point out the old moss-covered stools of ash, hazel and oak that appear to have had their straight, new-grown timber cut back for fencing posts, weaving of baskets and much more over many centuries.

Some of the stumps are hollow and broad, a reminder of how our ancestors made a living out of creating structures, palisades, charcoal and even weapons by harnessing the power and various flexibilities of timber.

Coppicing was a once common activity but stretches so far back in time that it is nearly impossible to say when it was first adopted as a sustainable resource of wood.

The most recent harvest is covered with brush to deter deer eating new shoots.

Another interesting thing of note is that the very act of coppicing actually extends the life of the trees that are managed in this fashion.

We find hundreds of foxgloves, many still in flower and the vast majority seeding. Lots of these biennial plants with their trademark leaves will certainly be in flower next year.

We enter an uncut area and find ourselves almost lost in the super-dense greenery.

One of the beauties of this place is that some trees are being allowed to grow as standards to great effect.

Traditionally, this is common practice. I think that when we inspect this coppice in April and May next year there’s a high probability that we will find many wild orchids. It is the perfect ground for some of our rarest plants.

We drive back and stop at the Black Horse but discover, unfortunately, that it is not yet open even though it is after noon.

I suggest that we visit the Rising Sun at Witheridge Hill, which I haven’t been to for years but is recommended by friends. Rosemary has not been there for a long while too.

It turns out to be a good choice. The pub is not only open but serves good beer and tasty food and the staff are friendly and polite. The setting is super and there is a lovely green beside the old school building.

The woodland on the steep slope to the west is another designated area of open access which we will have to explore next spring. Returning home, we discuss where we’ll go next.

The following day we meet up with our friend Dave Kenny in Binfield Heath. We want to show him some old trees that he may want to measure and record along Bones Lane, Bones Wood and beyond as we’d spotted some veteran trees on a previous visit.

We have not been through here for some time. Once again, the lane is full of various fungi growing out of the wood chippings laid along the once muddiest of lanes that begins by the Bottle and Glass pub. There are so many that I can’t name.

Dave, who has not been along here in a long while, is not disappointed.

We find a giant two-needled pine. I’m not sure what species it is. The bark is fissured and grey, the cones like that of a Scots pine. This needs some investigation as it looks to me like a Bosnian pine. I’ll have to share photos with friends and see what they come up with.

We dive into Crowsley Park on a small but important mission to gather a little pair of personal treasures (of which more later).

The grassland is still impressive at this time of year, full of harebells, red clover, parasol mushrooms, hawkweed and common bird’s-foot-trefoil.

The bracken is a bit invasive but the land is largely open and very much alive with great views and handsome trees.

The three of us head back and enjoy a pizza each in the garden of the Bottle and Glass.

I’m reminded of parts of September Song by Kurt Weill, in particular a version covered by an old acquaintance, Ian McCulloch of Echo and the Bunnymen. I’ve not seen him in years but I am still moved by the song.

When we arrive home we take a stroll around the garden and find a mass of wood pigeon feathers on one of our woodland paths. A sparrowhawk must have killed and plucked the bird and taken the carcass away.

Rosemary reminds me that she once encountered a sparrowhawk in the utility room with its lunch, another “woodie”, as I call them. The hawk was ushered out of an open window, the dead pigeon thrown outside. It was gone within minutes.

She also informs me that attacks by the hawk only occur every six weeks or so as if the predator lulls its prey into a mistaken sense of security.

There are less than four weeks to go until our wedding in Henley, all things still being allowed to proceed.

Rosemary and I will be exchanging not only rings but a pair of acorns that lay below the oak with mistletoe that I came across at Crowsley Park back in the spring and collected today.

We will carefully bury them in pots and later, when they are strong enough, plant them alongside each other in a favourite spot.