Strange: Migratory birds that are still here and fruit-loving chickens 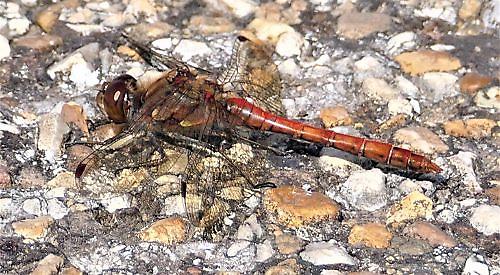 A ROBIN in our garden has begun to sing and I notice that the swifts have left, a sure sign that autumn is upon us.

Speckled wood and small white butterflies are still dancing in the light, a huge hornet whizzes about, a carrion crow caws and a red kite whistles from within a tree.

Rosemary and I take an early morning stroll along the riverbank below Shiplake Lock to see what has changed since our last visit. It is always a welcoming place.

We meet a pair of our old mute swan friends with a single cygnet. I wonder what happened to the rest of the brood. As ever, Rosemary supplies the graceful water birds with top-notch bread which they are happy to consume.

A little further on, the shallow water is full of minnows. A small piece of bread lands on the surface and the tiny fish attack it en masse in a frenzy.

House martins are still present and flying about with purpose, which is a surprise. I thought that they would have been on the swifts’ coat-tails back to Africa.

Teasel and dog rose make a dignified display. Great reedmace, or bulrush, is fully developed. Pond-skaters walk on the water and a heron peers in to choose its prey. When we arrive at the rear of Shiplake College, there is a large group of students present and rowing boats block the Thames Path, so we leave.

We’ve planned a mid-afternoon lunch meeting with two friends in Goring but not before heading north to Maidensgrove Common.

After passing through Stonor, we climb Park Lane and nearly accidentally run over a juvenile grey partridge (Perdix perdix) in the road.

Neither of us has been up here for some years. It is high ground, at its peak some 190m above sea level. I am reminded that it’s breezy too.

It used to be a popular spot for flying remote-controlled miniature aircraft. There’s none today.

The common was ploughed for crops during the Second World War but reverted to open grassland sometime afterwards.

Today, it is a sea of yellow hawkweed punctuated with red clover. There are various fungi present, some forming classic fairy rings. We come across a good-looking example of Agaricus macrosporus, a rare but edible fungus.

We head north to a line of oak trees and pass a dip in the ground, presumably dug for clay to make bricks.

As we enter a woodland that forms part of the common, a comma butterfly basks in a sunlit glade at our feet.

This wood is extraordinary and singularly attractive. Here, it feels as if time has stood still and we have entered the past.

There is no indication of human intervention. Every tree has a wonderful shape, dead timber is covered with moss and ferns are abundant.

The first beech tree that we come across is described by Rosemary as “muscular” and seems to be in a battle with its neighbour.

A very stout whitebeam lies nearly horizontal (but very much still alive), so I sit on the trunk. Alongside is a large hawthorn leaning as if it has been battered by a gale.

There are silver birch trees, too, with fungi growing below, including an attactive bolete (Pholiota adiposa). One tree has a sort of human face on its trunk.

Some beech trees have a lot of suckering brush around their trunks. I’ve seen this elsewhere but can’t fathom why some of this species do this. We come across another attractive bolete fungus, a Xerocomus, and some old hollow tree trunk boles full of water, which is invaluable to a passing mammal or bird but also a breeding ground for mosquitos.

A fallen bough is covered with another fungus, an agaric, Psathyrella piluliformis, with a kind of buttery-copper colour, caps cheek by jowl. Another rotting whitebeam is host to porcelain fungus, Mucidula mucida.

Thank you to my friend Professor Richard Fortey for identifying these with the help of Rosemary’s photographs. I have a reference book but it is so extensive that I don’t know where to start. I really need to educate myself, as I have done about many things.

Our path to the west is a well-trod green tunnel and intriguing as it twists and turns with shafts of sunlight that illuminate dog’s mercury. We keep sight of the open land to our left on a gentle rise so there’s no need for a compass.

John Keats wrote this poem, which I love.

Season of mists and mellow fruitfulness,
Close bosom-friend of the maturing sun;
Conspiring with him how to load and bless
With fruit the vines that round the thatch-eves run;
To bend with apples the moss’d cottage-trees,
And fill all fruit with ripeness to the core;
To swell the gourd, and plump the hazel shells
With a sweet kernel; to set budding more,
And still more, later flowers for the bees,
Until they think warm days will never cease,
For Summer has o’er-brimm’d their clammy cells.

Who hath not seen thee oft amid thy store?
Sometimes whoever seeks abroad may find
Thee sitting careless on a granary floor,
Thy hair soft-lifted by the winnowing wind;
Or on a half-reap’d furrow sound asleep,
Drows’d with the fume of poppies, while thy hook
Spares the next swath and all its twined flowers:
And sometimes like a gleaner thou dost keep
Steady thy laden head across a brook;
Or by a cyder-press, with patient look,
Thou watchest the last oozings hours by hours.

Where are the songs of Spring? Ay, where are they?
Think not of them, thou hast thy music too, —
While barred clouds bloom the soft-dying day,
And touch the stubble-plains with rosy hue;
Then in a wailful choir the small gnats mourn
Among the river sallows, borne aloft
Or sinking as the light wind lives or dies;
And full-grown lambs loud bleat from hilly bourn;
Hedge-crickets sing; and now with treble soft
The red-breast whistles from a garden-croft;
And gathering swallows twitter in the skies.

We spot a swallow flying low across the elevated grassland as we make our way back to the car. Surely it should also have flown south by now. Strange.

We meet up with our friends, Philomena and Derek, in Goring, cross the Thames to Streatley and, after passing the Swan Hotel, head right on a path towards Cleeve weir that’s new to me. We spy a heron lurking in some water meadows to our left and see more Pholiota adiposa in the stump of a fallen oak. Wondrously coloured, it has a sort of stickiness to its cap.

Greater knapweed (Centaurea scabiosa) with purply-red florets bloomd among the grass along with orange balsam, common comfrey and welted thistle.

An adjacent pond is covered with common duckweed (Lemna minor).

We note a distant poplar tree laden with mistletoe and pass a “laid” hedge of willow. Michaelmas daisies and purple loosestrife line the water’s edge. Cormorants inhabit a dead tree.

The opposite bank has some glorious boat houses but also some distinctly ugly modern buildings.

Virginia creeper is already a deep red, a Norway maple leaf shines golden, floating in the shallows, and poisonous wild privet berries glow as they hang above the water.

We turn back and head to a local pub for lunch.

When we get home later, Rosemary calls our near neighbour Lucia Juttla, who has eight chickens and we often buy their eggs from her.

Now she has added six ducks, four amusing Indian runner ducks and the other two starkly white. All are very friendly.

When I pluck a pear from one of Lucia’s trees in the birds’ compound, the chickens are all around my ankles. I start to dismantle the fruit and scatter it about. The birds go mad, eating every little piece that I throw on the ground.

I would never have guessed that chickens love fruit but then life is full of many surprises, is it not?