Remembering a Beatle, crunching on acorns and finding fine fungi 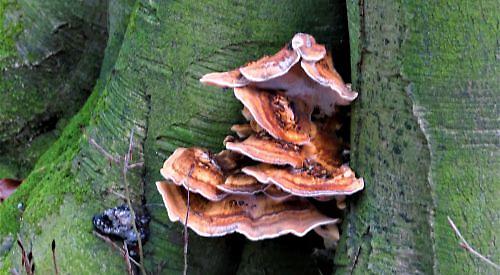 AS is usual these days, I’m awoken in the early hours by a soft purring in my left ear. It is our dear little cat Cilla, who was once terribly shy — not unusual for a rescue animal.

I feel honoured as it took months for Rosemary to gain her trust. Nonetheless I wish that she would choose to rouse me a few hours later.

Cilla settles down between us and sleeps until 7am when she demands some food, the pretty little feline devil.

We take an early morning walk beginning in Remenham. After parking outside St Nicholas Church, we are stopped by a large group of walkers who ask about our marriage last week.

Then we take a regular walk that encompasses great views across to Henley Park and the Hambleden Valley and beyond, great on a clear day like this.

In the near distance we can see Temple Island, a most notable ait on the Thames, which reminds me of a time, years ago, when I would meet a chap called George at the Row Barge pub. We’d play darts and then I’d shoot off for the last bus home.

Being a complete dolt, I did not recognise him. It was George Harrison. His final album, Brainwashed, included a song called Pisces Fish, which goes as follows:

Rowers on the river
Canadian geese crap along the bank
Smoke signals from the brewery like someone in there found the latest Pope
In a vat of beer that keeps pumping out with fury
While the church bell-ringer’s tangled in his rope
There’s a temple on an island
I think of all the Gods and what they feel
You can only find them in the deepest silence.

I liked George very much and he was not a bad darts player either!

After an hour or so, we head back to the car, look at our map and decide to go and look at some woodland at Witheridge Hill. We park outside the Rising Sun pub and let the patrons know that we will be back for lunch and off we go.

It turns out to be a good choice. On a steep slope it is rather open. I’m looking for a right of way to take us to Highmoor Farm and beyond and stupidly miss the entrance.

We accidentally take an unmarked path that leads to the valley floor but then it is “open access”, so no problem.

The wood is full of bracken, now turning gold in the shimmering sunlight.

We are confronted by a grove of silver birch trees, the leaves turning from green to a shade of yellow. Below are brambles still in flower while hedge woundwort is setting seed and woodbine creeps throughout. We hear the subtle movement of deer, just out of sight.

This is an elegant wood that appears to have never feared a saw, axe or hatchet. Huge cherries with scarred, fissured bark and tapered boles tower above, as do smooth-barked beech. One appears to have a human-like foot, two others form the shape of a lyre.

There are ash and oak trees here too with their readily identifiable bark and trunks, some twisted, moss-covered low down in strange but charming configurations. Field maples make the most difficult looking but natural contortions.

Yew trees join in the fun growing symbiotically with local deciduous natives. Some seem to be involved in a long-term wrestling match.

Old hazels, full of nuts, grizzled common hawthorn and holly, already bearing an incredible weight of red fruit, furnish the next tier with occasional elder bushes with their dark fruit.

We find a large clump of spiny stemmed gooseberry bushes and a substantial population of wild privet.

This is indeed a very special place with a magical feel. It looks like orchid territory too, so we will certainly explore it through forthcoming seasons.

We stumble upon a small group of a fairly rare fungus known as earth star (Geastrum sessile). An autumn fruiter, it can be found in deciduous woodlands as is the case here.

As we make our way back to the pub (and see the semi-concealed sign that I had been looking for earlier), we spot a large fungus on the green facing the old school building, now a private house.

It is a fine example of brown roll-rim (Paxillus involutus). It displays a broad cap, some 7in across with gills that flow down to join the stipe or stem.

After a commendable lunch, we decide to return as soon as possible and follow the route I had originally planned. We do so just two days later.

Again, we park outside the pub and this time we take the correct path, which initially is very narrow.

We soon find a rowan tree bearing lots of fruit so there will be no shortage for our winter avian visitors. Blackthorn is also kicking out masses of fruit known as sloes.

We recently saw a flock of newly-arrived redwing gliding across the A 4155 by Shiplake Cross. They are in for a veritable treat.

Herb Robert is still in flower while bigger plants are pulling down the shutters for winter’s arrival.

We come across one of the largest hollies that I’ve ever seen. It has grown into a massive tree. Most folk think of the holly as just a bush but, given the opportunity, it will go for it and surge upwards to become a monster.

Likewise, we encounter a huge old hawthorn that is seriously chunky and tall.

We break out into open country heading north towards Highmoor, an arable field to our left, an old hedgerow to our right.

It is comprised of large oaks, rugged field maples, hazel, ash, field rose, bramble and holly. We crunch our way through thousands of acorns.

Crossing a private road after passing through a green, metal kissing gate we spot an old, attractive farmhouse to the west. A broad and healty looking ash tree marks the entrance, full of keys.

To the west we have a great view over a very flinty field across Stony Bottom to Bush Wood with Stoke Row beyond. The trees are already taking on lovely colours.

We cross a wide field scattered with even more flint and head on through a strong breeze.

After a few hundred yards we encounter a wooden gate. Rosemary spots a little jumping spider on top. It is a black and white zebra spider (Salticus scenicus) and lively it is too.

We move on to the side of a paddock with some inquisitive horses over an electrified fence.

The hedgerow to our left seems overburdened with fruit, hawthorn, dog-rose and holly, all red and stunning against the clear blue sky. Below, meadow buttercups glow yellow with red clover.

We arrive at Highmoor Farm, where a pear tree is full of fruit. Alas, my scrumping days are over. There is an interesting, metal contraption underneath a sweet chestnut. What is it I wonder, maybe to do with a well?

Passing the premises, we walk alongside an old flint wall. Shiny-leaved hart’s-tongue ferns light up the path.

After a short while we pass a large oak and impressive beech to find ourselves in a comfortable wood dominated by mature beech trees, one with a mighty giant polypore fungus (Meripilus giganteus) growing out of its base. Another beech is host to turkeytail (Trametes versicolor).

There are so many species of fungi here, somewhat dazzling. Some I believe to be milkcaps. Also present is sulphur knight (Tricholoma sulphureum), common puffball (Lycoperdon perlatum), lilac bonnet (Mycena pura), magpie inkcap (Coprinopsis picacea), the deceiver (Laccaria laccata) and amethyst deceiver (Laccaria ametystina). There are others that leave me dumfounded. I need more tuition.

We turn around and make our way back to be confronted by a sublime sky, a great contrast to the beech woodland glowing gold. Down below a hoverfly (Episyrphus balteatus) is making the most of what a hawkweed can offer.

We have another lovely lunch in the Rising Sun. Full marks.

As we are leaving, I spot some parasol mushrooms on the green outside the pub. I home in and pick the largest. What a beauty. I cook it later and splendid it is too, one of the tastiest that you can find. It is so big that it lasts two suppers.

I have just taken delivery of a refractor telescope and will be viewing the moon and the planets that comprise our solar system. Mars is quite prominent in the south-east at the moment so I pray for some clear night skies. I hope to take some photographs that I will share as I can attach one of my telephones to the scope. Watch this space (no pun intended).

When we return home we find a little frog that has somehow leapt into a bucket. We release him into a damp shrubbery.

I take a look at our pond. The reflection of one of our Japanese maples on the water’s surface is stunning, some of our acer’s leaves have turned deep red.

What a year this has been. I’ve made so many new friends, caught up with university colleagues from 35 years ago via video conferencing and have found and married Rosemary.

Life can be wonderful — unless you are a recently purchased catnip and meet a cat just like ours. Oh dear!