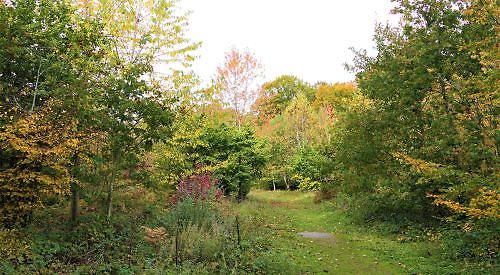 WE are taking advantage of every bright day at our disposal but then you can’t blame us.

Rosemary asks me to take her somewhere that she has never been and I think of a pleasant trail through College or Abbot’s Wood, near Woodcote and Exlade Street, which I last walked with our friend Matt Coome some time ago. It is extraordinary.

Our entrance is just off the A4074 past Cane End from a left turn that takes us into the eerily named Deadman’s Lane, a busy road which eventually takes you to Goring.

If you do drive, cycle or walk (not advised) along here you must pay attention to speeding traffic. Goodness knows why drivers find it necessary to speed. Nuts.

On first sight, you would think these woods are almost 100 per cent beech as that is the appearance from the exterior. Nothing could be further from the truth, however.

After parking in a suitably safe place a little further along than I had intended, we cross the road with care and enter the woodland.

I find myself somewhat lost since I was hoping to show Rosemary a great open ride with flowering plants and super trees. In fact, I’ve made a mistake and we are in the wrong place.

Nevertheless, we plod on through what turns out to be Bensgrove Wood, which is gloomy, dense and foreboding.

However, it is full of fungi — what a treat. We come across an upturned webcap. Sulpher tuft (Hypholoma fasciculare) grows on rotten tree stumps and there is a saffrondrop bonnet (Mycena crocata), a species new to me but rather pretty.

Apart from the predominance of beech trees, there are some fine yews, silver birches and oak trees present.

It is very dark in the interior, deep and somewhat menacing with holly attempting to obscure our path.

We find some sweet chestnuts that have shed so many nuts. It is quite crazy, just like everything this autumn fruit-wise but I love it. It is a big year for mast.

As Rosemary kicks through fallen leaves like an overgrown child, I try to get my bearings. These woods are so extensive that it is possible to get lost without a compass.

I would suggest always taking a map, having examined it beforehand, and if you do lose your bearings then listen out for the road traffic and then head towards it.

We walk back to the car and head home for lunch so I can check Google Earth to see where I went wrong.

A few days later we return and I find my chosen route, which involves parking in a specific spot, near a substantial area of concrete which could probably accommodate 40 cars but, as this is privately owned woodland, that’s out of the question.

We move north-west, pass through a gate and there it is — the ride that I’d tried to find on our last visit. What a sight.

It was once occupied by electricity pylons that cut a broad swathe through the trees heading directly to Greenmoor Hill, south-west of Woodcote.

Now these have been replaced with an alternative feed, presumably underground.

It is immediately clear just how wide this passageway used to be and not that long ago too. The once managed scar that ran in a straight line through the trees has been transformed.

It is still possible to make out the old fence-lines, some still wired off to prevent folk from electrocution and maybe deer incursion.

These days nature is reclaiming the land, helped by a sensitive planting regime. How marvellous.

So many trees have been installed by the utility company to enhance this area — small leaved limes, cherries, hazels, oaks and spindle are all cradled within in (presumably) biodegradeable protection tubes.

We will have to keep an eye on this as so often the installers forget to remove this form of protection.

This is most encouraging to witness — profitable companies and environmentalists working hand in hand. This is a future that I long for, although I’m not convinced by the drive for economic growth that may harm resources such as this.

At least the HS2 line won’t be going through these woods but I mustn’t get myself started on that. Nature has its own thoughts, too, and has flooded this straight ride with its own progeny.

We find some guelder rose (Viburnum opulus) full of glorious red berries which seem to be in competition with some hawthorn bushes.

Goat willow, or sallow (Salix caprea), also commonly named as pussy willow, abounds. Its leaves are a dark green above but greyish below and an important species for lepidoptera, especially the purple emperor butterfly which feeds on nothing else.

This is how the natural world works. All is tied in and interdependent.

The path is now gravelled but grassy and full of vervain and perforate St John’s-wort fruiting in profusion.

To either side, young oaks, silver birch, wild privet, yew and cherry have moved in through nature’s will with some fresh looking hazel and more spindle.

We come across an interesting beech that looks to be wearing a grass skirt and a young oak with a large broken branch.

Golden bracken lines the way with much more beech woodland beyond the former boundary, the old fence still intact.

We come across a natural looking and healthy pond, which delights me.

Further on, some bracken fronds are coloured bright blue. Is this as a result of paintballing?

I am confronted by a thistle that must be at least 7ft tall. It looks like a welted thistle but I’m not certain. Later, I’m annoyed with myself as I should have taken a small part to examine under my microscope at home.

After about a third of a mile, we find the initial path comes to an end in a wide space, where oak leaves are turning copper.

A single butterfly-bush (Buddleja davidii) stands in the middle of a turning-circle. A tiny fly feeds on a daisy.

We take a bridleway leading north to Exlade Street. The woods open up and light filters through the changing canopy. Our new path is narrow but rather lovely and rises slightly.

Hollies are abundant and tree roots expose themselves across the woodland floor like sylvan explorers.

We encounter some magnificent oaks. There are plenty of them, too. According to popular wisdom, this should not be the case in beech woodland but here they are staring us in the face.

A new path that takes us back south is full of heather so the soil conditions must be just right. The plants have finished flowering now but are still a happy sight.

Many more fungi are present, including some honey fungus (Armillaria mellea), a major destroyer of trees. Short of cutting the tree down, digging up the stump and burning the remains, little can be done. Trees depend on fungi but not this one.

We come across a young western hemlock-spruce (Tsuga heterophylla). These aliens, not unattractive and fragrant, are popping up hither and thither. Little goldcrests seem particularly fond of them.

We find some common ragwort growing through an almost impenetrable layer of acorns.

As we approach our entry point, some 600 yards away we spot some mystery conifers. I should know what they are but will wait until the undergrowth has died back to check the cones and needles. As we head for the car, Rosemary finds some more guelder-rose with berries and some puffballs and magpie inkcaps below.

She has loved the walk and asks if we can return in a month or two, which we will do.

We have such fun together, always out exploring, discovering outstanding vistas, finding elegant trees, uncommon flowering plants, decidedly interesting fungi, listening to birdsong and, at this time of year, admiring autumn’s colours.

I think back to a song that George Harrison covered on his album All Things Must Pass. It was written by his friend Bob Dylan and called If Not For You.

I have always loved this song.

P.S. We were interviewed on BBC Radio Berkshire on Friday by Sarah Walker and it went quite well, even if it was a little short. At least the Henley Standard was mentioned three times.

If anyone is interested in listening, visit www.bbc.co.uk/
sounds/play/p08t4s3g

If you do listen, I hope you enjoy it. We certainly had fun.