Wonderful woodland on our doorstep and meaningful river lock 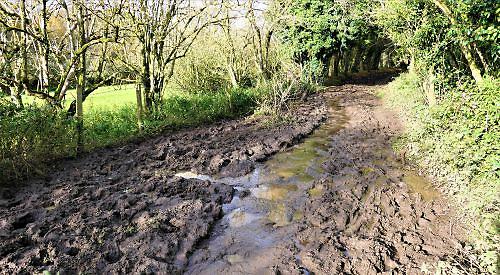 THIS morning we stay close to home and visit Clayfield Copse and Blackhouse Woods just north of Emmer Green. We have not been here for three months.

The former is in Berkshire, the latter in Oxfordshire. To this day I consider that Caversham and Emmer Green’s incorporation into the borough of Reading in November 1911 was a disaster.

Caversham Court, an historic building of national import, was demolished in 1933 for spurious reasons and Caversham House, once a boys’ school and another fine building, was knocked down in the late Sixties and is now the site of St Martin’s precinct, a decidedly ugly replacement.

I’m sure that both buildings would be Grade I listed by now but then Reading borough has always disliked Caversham, perceiving the inhabitants to be snooty, which is not true of course.

But I digress. We take a short drive to the eastern side of Caversham Park Village and leave the car near the now empty tennis courts.

We cross a playing field where nothing is going on and reach the lovely woods at the southern end.

There are seasonal ponds here with much beech, hornbeam and oak around the clay-lined dips but they are empty today. Nevertheless the going is soft to squidgy.

We move north through an open ride and come upon a young wild service or chequers tree (Sorbus torminalis) that is maybe no more than 10 to 15 years old.

I love this species with its characteristic leaves but fear for its future in this wood as I have been informed that the well-meaning folk who describe themselves as the woodland’s friends have hacked down one of these trees, mistaking it for an invasive sycamore. The species normally spreads through suckers but this specimen has clearly grown from seed. They need hot summers to germinate.

These are ancient woods and very varied too. At ground level they are full of field rose and spurge laurel accompanied by hazel, guelder rose, blackthorn and holly. The middle ground is full of field maple and wych elm. Higher above, towering oak and other deciduous trees such as cherries and sycamore compete for the sun’s benevolence.

A crab apple bends across our path as if in prayer. Cedars of Lebanon, still looking relatively young, claim the sky.

I have to remind myself that this once formed part of Caversham Park before parts were gradually abandoned, neglected or maybe sold off.

As a child, I remember watching from the entrance to BBC Monitoring Caversham Park Village being built. It filled my young heart with a deep sadness seeing a wonderland disappear.

As we walk along the major western ride, Pendulous sedge is abundant, still looking strong beside an old boundary with brambles and wood spurge. If you are observant you may find early purple orchids flowering here next spring.

Today I’m taken aback to see a clump of butcher’s-broom. I’m fond of this plant and have never noticed it here before but then it is not out of place. Uncommon in most of southern England, its local stronghold lies between Caversham and Goring. One to remember.

We have picked a good morning for our venture. The weather is clement, there are few other people about, not that we mind either way, and we are so fortunate to have a place like this so close to home.

We stop briefly to admire some fungi on fallen wood and spot some trooping funnel (Clytocibe geotropa) on the ground and turkeytail (Trametes versicolor) on dead wood.

I spot an interesting fern growing atop a rotting tree stump. It displays an uncommon shape with narrow-ovate inflexed fronds. It is unlike any other that I have seen before. There is a difficulty here as this looks like a species of polypody and is new to me.

I collect a small portion of frond and back home later I examine it under my microscope. After checking a reference book*, the evidence points to the plant being a hybrid, intermediate polypody, Polypodium interjectum, bearing blunt-tipped pinnae.

It is listed in my Flora of Oxfordshire that adheres to the old county boundaries and was first recorded in 1841. It is handsome and, I learn, scarce.

Herb Robert, a cranesbill, is still in flower with its delicate pink petals and orange pollen. We have a large population in our garden, the petals a uniform white. How can this be?

Further on we pass some elegant cedars of Lebanon standing like sentinels. A green woodpecker yaffles in the distance.

We reach the end of the trail and turn east towards Blackhouse Wood.

There are some good-looking youngish yew trees along the way with saplings of ash and horse chestnut. We come across a patch of redcurrant.

At the entrance to the wood we stop briefly to look upon a wild pear, which has not shed its leaves yet and looks healthy.

There is a tree trail here with laminated illustrations and information strapped to about 10 different tree trunks. It seems to be aimed at educating children so that is good.

We find a beech tree with a bole covered with large, evil-looking clustered bracket (Inonotus cuticularis) and then a yellow slime mould (Fuligo septica var. flava). It is not a fungus but a form of protozoa creeping its way along the surface of a fallen bough.

Further on we find a beech with some glorious oyster mushrooms (Pleurotus ostreatus) growing low down.

A dead beech is puckered with the drilling marks of greater spotted woodpeckers.

We find a curious oak with a vertical split in its bole (is it two trees or one?) and then another with three trunks.

We march up to the only wild service tree that I’m aware of in Blackhouse Wood. It has already shed its leaves, which is a shame as they turn a rich red. The tree has dropped the lot and they lie on the ground looking beautiful. The tree looks in good condition and is tall, which is a positive.

We turn back and head to Kiln Road to view the wood from the west and come across a beech that appears to be dancing. Some wild service and oak trees still bear colourful leaves.

The one thing that annoys me about these woods is the wood carvings that, to my mind, urbanise a splendid local amenity.

After going home for lunch, we think to visit Chambers Copse, only a stone’s throw away from Clayfield and Blackhouse woods, which we have not walked through since summer.

We park in Tower Close and make our way down Chalkhouse Green Lane, passing the riding stables. We make fairly good progress until, with our woodland in sight, I’m a foot deep in mud. Ridiculous. This is a public right of way but now reduced to this state by horse riders. We are unable to continue but will return another day from a different direction.

I extricate myself with Rosemary’s help and, mission abandoned, we decide instead to visit Marsh Lock in Henley, which has great resonance for both of us.

The lock has always held a fascination for me. I love the way that the water flows, turbulent in places, still in others, sometimes swirling. I think of all the fish unseen below and the needy ducks, swans and black-headed gulls that follow us, crying out for bread.

A pair of male tufted ducks are not interested in our offerings. A pair of ducks that appear to be twins look tough. Rosemary suggests they are the waterfowl equivalent of Ronnie and Reggie Kray.

Along the lock’s rugged wooden structure, we pause and release a tribute to Bruce, Rosemary’s late husband, and Catherine, my first, now deceased, wife into the water. Today is Rosemary and Bruce’s wedding anniversary, a poignant day. We still love our former spouses.

The two of us are married now and what a joy it is. I’m reminded of Shakespeare’s sonnet number 18:

Shall I compare thee to a summer’s day?
Thou art more lovely and more temperate:
Rough winds do shake the darling buds of May,
And summer’s lease hath all too short a date;
Sometime too hot the eye of heaven shines,
And often is his gold complexion dimm’d;
And every fair from fair sometime declines,
By chance or nature’s changing course untrimm’d;
But thy eternal summer shall not fade,
Nor lose possession of that fair thou ow’st;
Nor shall death brag thou wander’st in his shade,
When in eternal lines to time thou grow’st:
So long as men can breathe or eyes can see,
So long lives this, and this gives life to thee.”