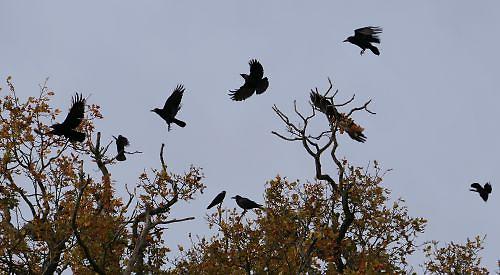 IT is early morning and as the sun rises serene, its light glistens upon the branches and trunks of our trees, now nearly denuded of leaves.

A pink-breasted wood pigeon appears on a bough and “coo coos”, a pair of magpies shine black and white, jackdaws flap about making a racket, collared doves purr and a blackbird clacks, disturbed by something that I cannot see.

A troupe of long-tailed tits do their daily rounds trilling to each other, a wren sings with gusto, herring gulls squawk above and a red kite patrols to control proceedings.

Part of one of our paths is now strewn with the fallen, bright red-coloured leaves of an Acer palmatum and camelias are flowering.

After a hearty breakfast, we again drive to Deadman’s Lane, close to Bensgrove Farm, but for a different reason. I want to guide Rosemary along some ancient lanes and reveal the true splendour of this fraction of the south Chilterns.

I have been wandering around this area for decades but am continually finding unexpected wonders.

We leave the car close to Abbotsfield and enter Hawhill Wood to the east. Although I’m familiar with these woods, I’ve never approached them from this side before.

It is very strange in a way that I do not need a compass as I recognise some of the larger trees in the distance from past encounters. Rosemary follows me, confident that I’ve got my bearings.

The woods are homely and redolent, mainly beech and oak with some rather large cherries. In the interior the majority have the most straight of trunks.

Unlike some people, who find woodland faintly intimidating, I feel secure, enveloped in a sylvan embrace. Maybe I’m a primitive (Rosemary does call me a savage) as I feel at one with the trees and like to touch them and caress their bark.

We notice how quiet it is. Apart from some building work on a new house in progress, all is silent. We meet nobody. Birds are maybe simply whispering to one another. Rosemary is happy, kicking through the fallen leaves like a child.

Once again we find odd configurations of trees, some abnormally twisted, others multi-trunked. It is most entertaining.

The understorey is typical for this part of the world with holly, hazel and beech and ash saplings. Dog’s mercury and enchanter’s-nightshade are just waiting for the starter’s whistle in only a few months’ time.

We walk on a public right of way that has clearly been treated as a bridleway by horse riders and churned up. Who is to police this illegal activity? We despair.

Otherwise the track is rather attractive. Even at this time of year, a walker will always find something to admire or treasure.

It has become a pleasure on walks like this to look up through the now nearly bare canopy at a sky displaying very few vapour trails of trans-continental aircraft. Occasionally, especially at weekends, we are treated to the derring-do of noisy “red barons”.

Among the fallen beech mast we find a nearly mature common puffball (Lycoperdon perlatum), its cap spangled with a star-like pattern. If you think deeply and study the cap’s surface it looks like an emergent galaxy with a black hole at its centre.

We chance upon some common bonnet (Mycena galericulata) growing on the remains of a tree stump and handsome it is too.

This woodland is graced by some elegant mosses, some clambering over flint. We find some trees that are bearing redundant protective guards. Rosemary removes these as the bark is looking distressed and appearing to rot. If you plant trees, do look after them and please remove the plastic protection after the saplings have become established.

As we follow the woodland edge, we are able to look across an open field to Thicket Copse and Gutteridge’s Wood, which we know well.

We are both looking forward to seeing the bird’s nest, early purple and white helleborine orchids that will appear here in the spring, hopefully in good numbers.

We stumble across a white slime mould on a fallen branch. It could be any one of a number of species.

A moss-covered beech has a bole with an inviting entrance for a smallish mammal looking for a home. It could be straight out of a fairy tale.

There has been a fair amount of replanting of native trees here, which is admirable and I would expect nothing less from Sir Julian Rose’s team.

Our path hugs an old boundary line. I wonder what purpose it served all those years ago. It must have been impressive way back then but has been worn down now.

After a while we find a gate and, strangely, also a stile leading to a footpath that traverses Little College Wood, an old favourite of mine.

All this is new to Rosemary but she loves it as there are more leaves to wade through. She is the oldest kid I know!

It is rather empty here with little undergrowth underneath the trees. A beech looks as if it has had one too many and is leaning on friends for support.

We reach a corner where we can hear the traffic on the A4074 only a few hundred yards away. As we head back, we hug the woodland’s edge and find some even more strangely shaped trees, maybe due to exposure to strong winds or genetic mutation. They are all attractive in their own way.

We find some lilac bonnet (Mycena pura) growing through some moss on a fallen bough. It looks fragile.

We return to Hawhill Wood and come across some fine yews and whitebeam. Further on by the roadside we gaze up at some common limes full of mistletoe.

We cross Deadman’s Lane and head west along a right of way towards the almshouses at Goring Heath.

At the end of this narrow track stands a sweet chestnut with a raft of spiny covered nuts on the ground.

After turning south, we pass some pasture with dark brown cattle that seem happy, munching away on the grass.

Our path twists to the west and we are fenced in on either side. We spot plenty of young oak trees growing through thick grass. Lady’s bedstraw and greater stitchwort are both sporting flowers — at this time of year!

We pass a beech hedge that has not been cut for some time and looks to be in fine fettle.

Reaching the almshouses, which were founded by Henry Allnutt in 1726, we note how attractive they look alongside an old school and chapel.

Making our way down the main drive, we spot a broad, spreading oak behind an avenue of lime trees.

We head south-east towards the old post office, noting the tell-tale signs of old “laid” hedges, and then turn left and back into Deadman’s Lane.

After about 50 yards, we peel off to the right along a footpath that leads to Haw Farm and beyond. The entrance is graced by two oak trees. Haws and rosehips line the path.

A murder of crows takes flight on our approach.

We pass through a gate into a field leading to Holme Copse, which is full of field pansies, red dead-nettle, scentless mayweed, common field-speedwell and field penny-cress. These, too, are surprising finds so late in the year.

Rosemary suggests that we return in spring. I’m all for that.

We meet Holme Copse and then Hawhill Wood once more. As the sky darkens, we make our way back to our car.

Rosemary asks how I know my way around. I shrug and then quote from George Harrison’s song Any Road from his last album, Brainwashed.

And if you don’t know where you’re going
Any road will take you there.

Rosemary seems moderately impressed. Back home later, I play the song for her.

We have just received delivery of 10 wild privet and the same number of fly honeysuckle (Lonicera xylosteum), a native of the South Downs.

These will complement our ever-expanding hedgerow project and will surely attract insects and birds.

We both long for spring. There is so much to look forward to.