Ancient farmland with charm matched only by its caring custodian 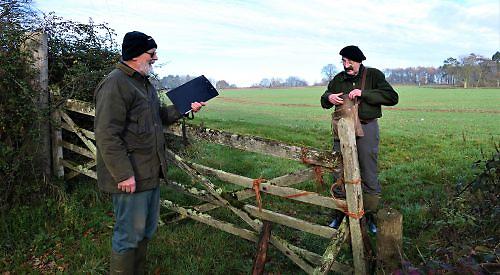 OUT of the blue I receive an email from Jon Hatt, a local farmer.

He very kindly invites me and Rosemary on a tour of his farm. We readily agree as this represents a rare opportunity to engage with a real local who knows his land inside out.

Coombe End Farm is located west of Whitchurch Hill and south of Crays Pond, nominally in Goring Heath. It sits on high ground above the Thames, close to Hartslock nature reserve and the famous Goring Gap. A truly splendid part of the south Chilterns.

We arrive on a very foggy morning and meet Jon and his dog George.

Jon has been farming here for many years, having taken over from his late father Jack in 1988. He believes that his dad first farmed as a contractor to former owner, Lady Godlee, in the Forties and then took over the tenancy in the early Fifties when she ceased farming shortly before her death.

The farm was gifted to the National Trust but Jon is not sure when exactly. It could have been shortly after Sir Rickman Godlee, Baronet of Coombe End, died in 1925 or after Lady Godlee’s demise.

Either way, Jon’s family have been tenants of Coombe End Farm since 1952. At Lady Godlee's request, the farmhouse was initially let to a member of the medical profession in memory of Sir Rickman. Mike Squires, a well-known surgeon locally, and his family lived there until the early Seventies.

Jon lives in what was once known as the Bailiff’s Cottage. It stands more than 490ft above sea level with the River Thames some 330ft below and not more than two-thirds of a mile away. Quite a drop.

We set off briskly towards the coombe, meaning a deep valley. It is a splendid sight and looks like the Almighty took a large trowel and sculpted it.

Jon has set aside the coombe as a wildflower meadow with seeds harvested by hand by Martin Parham, a seed specialist from Whitchurch, from the Hartslock reserve with the support and permission of the Berks, Bucks and Oxon Wildife Trust and Natural England. The seeds were hand-sown by Martin and Jon.

Studying the land, it would not surprise me if wildflowers would find their own way here naturally as the coombe has not been fertilized or sprayed with herbicide for a long while.

At least 100 species of native plants have been recorded here, including wild orchids. The last survey was in 2016. We can see the remains of a vast spread of wild carrot on one of the slopes. Jon invites us to visit again in spring to take a look. We can’t wait.

Spiders have cast intricate webs on the vegetation underfoot now visible because of the mist.

At the bottom of the coombe lies Merricroft’s Wood, a mixture of old coppice with deciduous and coniferous trees. It looks inviting in the rising mist, an enchanting sight.

As we chat, George bounds about like an overgrown puppy, clearly enjoying himself.

On the other side of the coombe and emanating from a corner of Kessels Copse to the south-east, a finely delineated deer path can be seen as it weaves down to the coombe floor.

We make our way back up the hillside and stop briefly as Jon points out a large badger’s sett that is clearly visible below the rim of a dip surrounded by a considerable clump of mature trees.

He apologises for the fact that we cannot see the extensive views that are normally visible up here on this high ground. We’ll pop back when there is a clear sky to take it all in.

Leaving the coombe, we head back up the private road where we left our car and admire some chunky looking cattle in an enclosure named Coombe Green. The animals vary in colour and markings. Jon informs us that they are Aberdeen Angus cross suckler calves now over 20 months old and the last of last year’s “drop”.

A minute or two later, we hook left westwards down a section of the Chiltern Way. After a few hundred yards Jon leads us into Cockpit Plantation, also known as Booth’s Shaw, to the right.

He tells us that it was planted many years ago as a hazel copse to maybe provide stakes and staves for farm use. It is a quaint little wood, mainly comprised of oak, beech, holly and hazel.

We’re a little way into the interior when Jon indicates a hazel dormouse nesting box about 4ft up a hazel bush, provided for our native but now endangered little mammal.

Jon is not sure if there are any about but his neighbour is doing his best to help them if they are present.

The dormouse is cute with orangey-brown fur, very long whiskers and a bushy tail. It spends half of its extraordinary life in hibernation between October and May in a nest constructed on the ground. It is even known to snore!

When it eventually surfaces from its slumber it is only active at night, hence its very large black eyes. Emerging just before dark they are rarely seen.

Autumn’s hazel nuts are of vital importance to fatten up for their long sleep. The presence of the species can be seen by examination of hazel shells. The hazel dormouse opens the nuts by chewing a small hole with a round smooth edge on one side of the shell.

Grey squirrels, on the other hand, split the nut in two while the bank vole and wood mouse, for which the nuts are also an important food source, both leave clear tooth marks.

In summer the hazel dormouse will dine out on flowers, insects, berries and fruits. I have yet to see one but hope to one day.

As we move towards the end of the woodland, George flies off like a rocket and nearly snaffles a female pheasant. Jon reprimands him.

We emerge in an arable field heading north. Jon leads the way. Lone oak trees, dotted here and there on the margins, look like sylvan phantoms. The field, Cherry Pieces, is broad and extensively planted with forage rye, grown for seed.

John reports that the rare stone-curlew (Burhinus oedicnemus) was once present but has not seen here since the Fifties. I saw one about 12 years ago in Moreton Cutting when travelling on a train heading to Reading.

These curious looking birds possess large lizard-like yellow eyes and long yellow legs with knobbly knees. They are mainly nocturnal. Despite the name, the species is not related to the curlew and is the only member of the family Burhinidae in Europe.

Along the western boundary of Cherry Pieces there is a deep trench running back towards Stapnalls Farm, now full of oak, holly and beech. It is obviously very old.

Making our way along the side of the field with the old ditch to our left, the three of us note a red kite perched on a medium-sized oak.

I ask Jon about nearby Cold Harbour and what the name means as it crops up in many places on my Ordnance Survey maps always away from habitation. Jon explains that the “harbours” were where drovers rested themselves and their cattle overnight on the old droving routes to London. The cattle were put into a field nearby, often triangular, to help them sort out in the morning.

Normally there would be an inn or suchlike nearby for a hot meal but if not it was called a “cold” harbour.

We continue walking eastwards and are confronted by a vast crop of miscanthus, commonly known as “elephant grass”. There are clear animal paths leading to the interior. It is grown as biofuel. Rosemary is disappointed that there are no elephants.

We turn southwards and march on with the miscanthus to our left, open country to our right across a small hedge and ghostly, leafless oaks ahead.

As we pass through the last farm gate on our tour, I spot a large clump of deadly nightshade (Atropa belladonna) with berries gone, so something must eat them.

Our hours out with Jon have been a real treat. We’ve really enjoyed ourselves in his company. He was great fun, informative and an entertaining host. We will keep in touch and will take him up on his invitation to return in spring.

I could not have written this without Jon’s invaluable collaboration, so my thanks to him.

Back home, as Rosemary prepares lunch, I sit outside to watch a pair of red kites playing an aerial form of tag with a couple of jackdaws. They are clearly enjoying their game.

A mistle thrush lands in one of our trees. Marsh, great and blue tits are tucking into our bird feeders. Later, in bed, we’re awoken by a male tawny owl. Today has been a real hoot.