From strange roots to soaring evergreens, this is genuine woodland 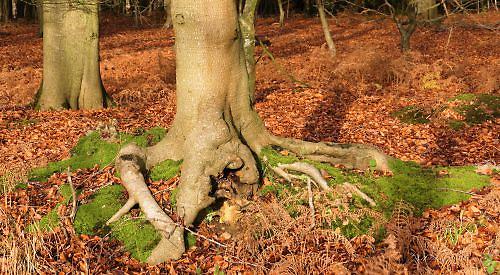 WE take an early morning drive north past Cane End and park in Deadman’s Lane.

We cross the busy A4074 with caution and head north-east along an “improved” section of the lane towards Whitewood Heath.

Immediately to the side of Valentine Wood, Rosemary finds some gorse in flower — such a welcome and heartening shade of yellow at the year’s near- conclusion.

The immediate interior of the wood is as you would expect in this part of the south Chilterns, dominated by beech with oaks dotted about and clambering woodbine and holly below.

Unfortunately, Valentine Wood is full of invasive rhododendrons, which kill off native plants, including the native bluebell.

They cut out spring sunlight, change the nature of soil and generally wreak havoc. They must be removed. I’ll see if I can find out who owns it.

An oak bears a moss-covered bole. Others have strange, creeping root systems.

A beech is shaped like an octopus, now framed with copper-hued bracken, and another has an enormous bulge in its trunk as if it is pregnant.

It is quite wacky out here arboreal-wise, although very interesting to an amateur dendrologist.

After much tree examining, we arrive at Whitewood Heath, where there is a healthy looking pond. The water is supernaturally clear and marginal plants are primed to explode or go “twang”, as Rosemary says, come the spring. It must be home to frogs, toads and newts. An amphibian paradise.

The pond is surrounded by some old horse chestnuts. These are not native trees and originate from the mountainous regions of the Balkans.

Here they display great, almost brutal shapes. Come spring they will be adorned with their lovely milky white flower panicles, striking palmate leaves and later, of course, their huge, glossy seeds, which are now banned by schools for safety reasons. No conkers? Bonkers!

There are some handsome arable fields out here, not too stony for a modern ploughshare.

Astonishingly, we find some mature and healthy Lawson’s cypress in between beech, birch and oak. They must have been planted in a random fashion rather than the current method of strict lines akin to a housing estate.

There is also a great stand of mature Douglas fir and some wonderful, tall larch trees.

Although they are conifers, larches are deciduous and shed their needles when the first night frosts bite. The needles turn a stunning shade of gold as they make their largely unnoticed and silent drop to the forest floor before next year’s green resurgence.

These elegant trees appear like sculptures against a blue sky. They smell nice too, whatever the season.

Our path opens up as we head towards Hook End Manor, the sun casting stark shadows as we approach a prominent gate.

Common ragwort is putting on a late but rather ragged display. Some young Douglas firs look splendid against the blue sky.

We find some casualties, as is normal. An oak seems to have been torn in half but that’s not an unusual sight in genuine woodland. Being very solid, oak wood does not bend so is susceptible to powerful gusts.

Nonetheless the oak is a stupendous tree, whether a youngster or veteran, and host to more than 270 insects, some of which depend on it.

We find a great spread of foxgloves itching for warmer months. It will be fun here when the sun rises with benevolent light. Hook End Manor looms, an historic and important landmark building. Originally built for the Bishop of Reading in 1580, it has been owned over time by the likes of Alvin Lee of the rock band Ten Years After, Dave Gilmour of Pink Floyd and then Trevor Horn, a music producer of Buggles fame.

It certainly has pedigree and a recording studio to die for. Let me in!

A black and white outbuilding with a weathervane stands on stilts. A lawn is graced by a fine monkey-puzzle, or Chile pine, which was introduced to England in 1795.

Rosemary, who is fascinated by weathervanes, spots another in the shape of a pheasant.

It is uncanny how much water there is up here. Many ditches have been dug by the roadsides, feeding a pond.

Blackthorn has been flayed, so some of the branches seem to be bleeding, red and wounded. Nevertheless, the shrubs are still bearing a heavy harvest of sloes.

We walk up to admire some magnificent Scots pines.

A little further on we stop to gaze upon a large oak with what appears to be a bat box high up the trunk. Good work, I must say.

Other oaks tower above in competition with beech and vibrant holly. In fact, as we continue, the size of some oak trees is astonishing. One is huge and I would guess at least 500 years old.

As we near Lackmore and Valentine Woods, Rosemary spots some movement in a hole in the bole of a fallen beech and there it is, a little wood mouse (Apodemus sylvaticus) hoping we’ll keep away. A brave little mammal.

Rosemary reminds me of To a Mouse by Robert Burns (1785), which begins:

A short distance further on, a huge beech has fallen to reveal sandy soil beneath its brittle root system.

We find some Oregon grape in flower. It is not native (the name gives it away) but we don’t mind. It is in flower, which is just lovely at this time of year, and anything that provides food for insects is welcome.

We head towards Beechwood Farm, where a good friend lives but for obvious reasons we don’t call. Instead we follow a long, potholed drive to the valley floor and into Splashall Bottom (aptly named as it is full of water) that forms part of Busgrove Lane, leading north to Stoke Row.

We head south and after a few minutes of dodging traffic, we spot a monumental ash tree with multiple trunks that seems to say, “Hello, look at me!”

We take a right into a section of Rumerhedge Wood along a clearly delineated public right of way. The rising pathway is very muddy.

One feature of the woodland is the proliferation of moss-rich trenches and boundaries revealing shining flints. I can only speculate that long ago these marked field edges.

We hear and then see the passage of redwing as they “seep, seep” in a moderately sized flock. They are delightful looking members of the thrush family that overwinter here from Scandinavia and beyond.

We spot a muntjac deer that careers off into the sparse undergrowth as a dog appears seemingly out of nowhere. We greet the animal’s owner.

These woods are fairly open but with much judicious replanting. I gaze inside the narrow funnels that guard the saplings. They all appear to be natives.

We love this place. Both the air and ground smell sweet, the sky is largely devoid of aircraft and we don’t encounter many people.

On the way home we share a tasty dish at the Crown in Playhatch.

The next morning, we take delivery of a whitebeam tree, a Christmas present for my mother. We will plant it for her over the next few days.

Glancing at each other, it is obvious that we want one too. Such is married bliss and a shared love of nature.

Happy New Year to you all.

• This column was written before Oxfordshire and Berkshire were placed in tier 4.