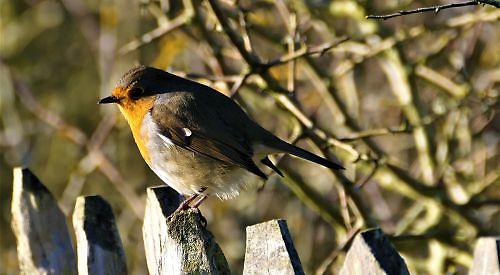 AS I write, the year 2021 is nearly upon us. The one that we will have left behind has been tumultuous for us all but nature does not adhere to human dates or times.

In our northern climes the natural world follows the seasons as best it can despite global warming.

A knock-on effect can be seen in the breeding patterns of birds such as blue tits. They incubate their eggs to coincide with the emergence of caterpillars, the major food item for their young.

The birds’ timing has been a little out of kilter in recent years but they will adjust, I’m sure. Nature always finds a way.

Our jackdaws seem to be having fun. Apart from occasional skirmishes with playful red kites (I spotted nine this morning), a pair of resident magpies and some carrion crows, they hold their own due to sheer numbers.

They are most entertaining and appear to have a “pecking order”. The very moment they see Rosemary they cry out for breakfast, cheeky devils. My wife thinks that they are anarchists, akin to crazy, feral children.

The local mob of long-tailed tits are beefing themselves up on the suet balls that Rosemary provides. They are a delight to watch as they twitter away, seemingly unaware of my presence.

I spot the odd overwintering female blackcap. Robins and dunnocks hop about, the latter quite comically. We love them all.

Starlings have returned and in numbers too. On first sight, they seem argumentative but exhibit a cohesion not seen in many species.

They sometimes form huge murmurations that move through the sky like shoals of fish before the flocks dive into large trees or settle on buildings and huddle up close together, warm and silent. I love them with their shimmering, glossy plumage.

We learn that Oxfordshire has been forced into tier 4 by the Government from Boxing Day. Pubs, restaurants and the majority of “non-essential” shops will be made to shut.

We are both mightily fed up at this news. We wonder how these treasured establishments will survive as going concerns.

In response, we eat out on four consecutive days, the last being a lunchtime visit to the Maltsters Arms in Rotherfield Greys, one of our favourite places. The food here is good and we want to support Gary and Donna and their team.

Before our visit, we decide to walk around the area. I think it is advisable to steer clear of riverbanks after all the recent rain and the rising water levels.

The going will be rather muddy so initially we head down a lane, going eastwards towards Henley through Pindars Wood and onwards to Lower Hernes.

After a short while, we turn back as the mud is too deep. It seems to have been churned up by a weighty tractor and we feel a little unwelcome.

We come to some slippery stiles and I tumble to the ground in an heroic attempt to get over one, much to Rosemary’s obvious pleasure. Thankfully, she enjoys it so much that she forgets to take a picture. What a relief.

We head back up the long incline, cross Greys Road and strike out towards familiar woodland. It turns out to be a good choice.

We tread the narrow lane westwards past St Nicolas’ Church, which looks beautiful in the winter sunlight, and then a “green” burial ground.

We are greeted by a perky little robin, breast puffed out. We both wish that we’d brought some suet pellets as a gift. We’ll remember to bring some next time as the bird is such a sweet, friendly little thing.

Green lichens adorn the twigs of blackthorn and hawthorn, now nearly stripped of fruit by some hungry birds.

To our left we pass a field full of fluffy sheep. They seem quite content.

To our right there is a pedunculate oak that is emblematic of the English countryside with a straight, powerful trunk and broad, twisting branches set against a clear sky. Oak trees look beautiful whatever the season. A magpie sits in the cover of the tree looking most confident. Such bold birds.

At ground level some white dead-nettles are flowering, their leaves looking so fresh that I have to remind myself of the time of year.

We step into an ancient, wide track heading south towards Dog Lane, obviously an old droving route. We both find it enchanting despite it being devoid of leaves currently.

Old hazel and crab apple trees are on either side. The latter’s fruit that littered the ground on our last visit has vanished. No chance now to gather it up to make jelly, as I had planned.

We pass through a gate and turn right, heading westwards.

The banks on either side are steep, topped by some shapely beech. We spot an oak tree spiralling around itself so that it resembles a strand of DNA.

Here it appears to be perpetually moist, hence the presence of so much moss and lichen. We must return in spring when it will smell so good.

Once again, we see much fallen wood. Come on, you stag beetles.

Brambles scramble beneath youngish oaks; honeysuckle or woodbine does the same but with loftier ambitions.

Our path becomes decidedly narrow and rather prickly but highly attractive as we pass through fine trees before eventually meeting a crossroads.

We turn south and uphill through some Scots pine trees. They have a distinct reddish, rugged bark and a green hue to their needles high above with dainty cones scattered below.

Apart from the evergreen yew and juniper, they are the only other native conifers. Superb trees. The sun suddenly breaks through, illuminating the golden bracken. This is a mild but magical winter’s day.

We spot some turkeytail fungus on decaying hazel stumps and then an ancient field maple covered in moss. I love the way that this species becomes knobbly-trunked with age.

I have noticed that Rosemary is becoming adept at recognising flowering plants, trees and birds that I once identified for her.

We are both nature lovers, of course, and one of the reasons that I love her is down to her intelligence but this is becoming fun. Perhaps I’m not a bad teacher.

We emerge from the woodland and head towards Crosslanes.

We bump into a man and stop for a brief chat. Rosemary spots something moving in his jacket. He is taking his gorgeous- looking 14-week-old cat for a walk. She sits in a pouch on his chest behind his outerwear to keep warm. Cute.

He tells us that she occasionally jumps out to explore but always returns for the comfort and ride. You can clearly see the love between them.

Onwards we go, the pub now back in our sights. The winter light is naturally low, penetrating, sometimes almost blinding, but reveals such natural details impossible to see in summer.

We have passed many signs, some most threatening. I always follow rights of way unless I have been given permission to explore by landowners.

We make it to the pub slightly early and settle down for a nice pint and food, oxtail for me and venison faggots for Rosemary. We share and find both dishes excellent.

I read that 10 million Christmas trees were sold this year, some with roots, the majority not. We need more trees but not of this kind.

The last time we ventured into a garden centre there was hardly anything but cut ones at about £60 a throw, many destined for shredding, others to be discarded.

I know that it is an old tradition to have a tree and remember the wonderful scent as an overexcited young boy given the task of decorating the tree, but cannot help reflecting on this waste. Just imagine if all the money spent on an ephemeral ornament had been donated to, say, the Woodland Trust.

Back home, I walk around the back garden and note that various forms of witchhazel are flowering with strap-shaped petals of various colouration.

I do like these large shrubs (Hamamelis virginiana), having first encountered many wild ones in Nova Scotia growing above poison ivy in the huge Kejimkujik National Park.

It was also full of porcupines. We have hedgehogs, the Canadians have big beasts. I thank God that ours don’t shoot their spines.

We have just witnessed a buzzard settling on our giant fir. Whatever next?

The two of us are looking forward to seeing our little wedding gift acorns popping into life. We will find a place for them both after transferring them from their earthenware pots. We do hope that they prosper. We’ll name them after our second given names, Joseph and Selma.