Destruction of this favourite natural copse almost reduced me to tears 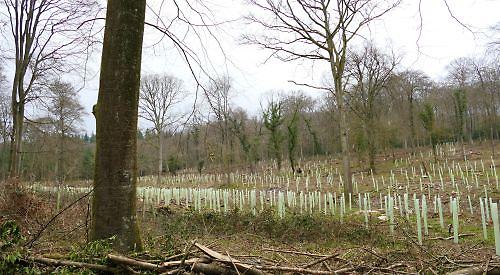 IT is a windy day and I think it unwise to take a woodland walk for fear of falling branches and trees.

Although the ground is drying out, as is normal at this time of year, it would still be a risk so we’ll wait until the weather has calmed down. It means I can continue decorating the house.

A chirpy pair of house sparrows has set up home along one side of our back garden.

They seem to like the suet balls that we’ve provided. Maybe we’ll acquire a small colony, which would be great.

The species is in a tailspin. Rosemary informs me that when she and her late husband Bruce moved into the house in 1987 there were about 30 or 40 that inhabited a large bush some 20ft from the property along with many goldfinches and their greedy, demanding chicks. Bruce, a Scot, referred to the sparrows as “spyugs”.

The sparrow’s decline, alongside that of the starling, is down to three factors, in my view: the worrying loss of a myriad of insects; the paucity of nesting sites and a human obsession with treating lawns; and garden plants with herbicides and insecticides.

So I welcome these two sparrows and am grateful for our iridescent starlings in our non-toxic garden.

Elsewhere, I study the antics of carrion crows, jackdaws and magpies as they squabble up above. Red kites ride the wind, showing off like schoolboys with new toys.

An avian estate agent seems to be promoting our giant fir and redwood as suitable nesting sites. Set in a mature garden to exacting standards with stunning views. What bird could resist?

A green woodpecker laughs in the background as do our near-neighbour’s ducks. Blue, great, marsh, long-tailed and coal tits do what they always do, which is to make as much noise as possible.

A goldcrest “dingly dingles” away. Tiny as they are, they can be quite aggressive when protecting their nests. Magpies continue to build a precarious looking nest in some mistletoe high up in our robinia. The female is fickle. Offered twigs by her mate, she rejects many as unsuitable.

Rosemary made some interesting observations in the garden a long time before we met:

“One crow was a great fan of spaghetti and since I always cooked too much there was always some spare for him. I would put it out on the patio. He would turn up and carefully lay out the spaghetti in straight lines so that he could scoop up a whole lot in his beak and fly off with a pasta moustache.

“When he somehow damaged one of his wings he lived for about a month in one of the sycamores at the top of the garden. He would cough to let us know he was hungry.

“We would take him up a plate of food and put it on top of a water butt along with some fresh water so he could hop down out of the tree and eat. After a month he recovered. On a later occasion he flew in with a slice of stale bread, dropped it in another bowl of water positioned on the patio for hedgehogs. He jumped on the slice to submerge it and finally flew off with it when it was moistened enough to his liking.

“There were also the pizza-loving jackdaws who liked to take the provided spare crusts up into the trees and beak them to death. Occasionally walking up the garden. you could be hit by falling bits of pizza — not a normal garden hazard.”

Well, what do you make of that then? Since I have arrived on the scene things have not got any more sensible.

Rosemary takes a tumble after slipping on the wet floor in our utility room and hurt her knees. It was not my fault — honest!

One knee is swollen so we are unable to go out for a few days. She can’t drive us anywhere and I cannot drive at the moment down to my own dodgy knee and our Volvo V70 estate is a bit of a brute anyway.

After a brief recuperation, Rosemary is up to going out and says she has cabin fever. (I’ve used the time to decorate two more rooms. It can only put me in her good books.)

We decide to visit Gutteridge’s Wood and Thicket Copse at Goring Heath, where we have not been for almost a year. Thankfully, the wind has dropped.

After parking opposite the former King Charles Head pub, we admire a line of ancient oak trees, the rise of dog’s mercury with its fresh, translucent leaves and the flowers of lesser celandine.

We then head into the woods, which are very peaceful and, strangely, devoid of birdsong. In the distance we can detect the sound of a chainsaw.

As we descend towards Thicket Copse, I’m upset to see that all the ash trees have been felled. Many seemed unaffected by ash die-back so I can only assume that this is either for the safety of walkers that stray off the official rights of way or a cash crop. On closer inspection, the once delightful copse is no more.

We can see that much new tree planting has been carried out but once again in lines. I despair.

We try to get closer to see the work taking place but find it almost impossible as the bridleway has been churned up by vehicles disposing of felled wood.

I’m worried that the contractors have no idea what lies beneath the trees, a veritable treasure of national importance and I’m not just talking about the orchids. This small but significant area is home to bluebells, wood anemone and yellow archangel.

Oxfordshire has a wealth of the UK’s species of orchids, about 30, so I hope that what I have cherished over the years is not obliterated.

We return the next morning, approaching from a different angle, and my worst fears are confirmed.

I feel disorientated. All my memorised landmarks have been obliterated, replaced by a sea of saplings with plastic-looking guards akin to a war cemetery.

There are signs everywhere in this now alien landscape proclaiming that footpaths have been closed “for public safety during ongoing works to mitigate against deer-browsing damage. This is essential to enable the woodland to naturally regenerate after suffering badly from ash dieback”.

But it is not natural regeneration, it has been planted and badly, too. Nature finds its own way. Human intervention is unnecessary.

Wood-brush has been randomly erected to deter incursion. A sad sight.

We have another look at the part of the copse where the early-purples have flourished since I first found them some 25 years ago in a little Arcadia. Devastation.

The vast majority of stacked timber shows no sign of disease.

As we leave, I remember that I have a bona-fide licence to dig up wild plants for close examination so we may have to rescue a few if we can find any and then return them to their original home at a later date.

I took Rosemary to see the orchids last spring. She loved them and the setting that was full of bluebells, yellow archangel and wood anemones too. It has all gone now.

My lasting memory is looking at a blue tit wondering where his home had vanished to. I can’t imagine what will happen to the whitethroats when they arrive. Maybe they’ll just turn back. I could cry. A little bit of paradise has been lost, possibly forever.