Spring has certainly arrived... but there’s no sign of frogs in our pond 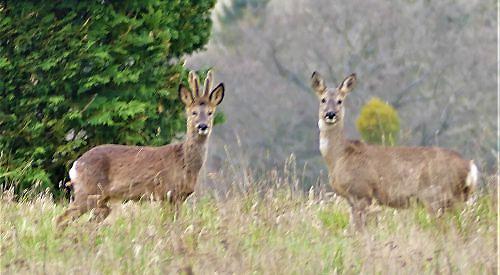 A COUPLE of weeks ago, we both noticed the absence of common frogs in our garden pond. This is unusual.

Rosemary tells me that they have been ever-present since she and her late husband Bruce moved in in 1987. Until now.

The common frog is the most frequently found amphibian in Britain. I’m not sure what the reason is for their non-appearance, which is disturbing as it is now the breeding season. We should be hearing males croaking, as we did last year, and seeing masses of spawn.

I’d be interested to hear from any readers who have noticed a similar phenomenon or indeed a surfeit of spawn this year.

Rosemary suggests that rats may have attacked the frogs but neither of us has seen any vermin for some time.

Common frogs’ scientific name is Rana temporaria, which refers to the fact that they are only seen briefly as they scatter after mating and disappear into damp undergrowth or anywhere else that is largely moist and comfortable for them to live and feed.

The great wood-rush (Luzula sylvatica) is looking healthy, too and our new mixed native hedgerow of some 12 species is coming on in leaps and bounds. We’ve ordered 20 wood anemones (Anemone nemorosa) and 10 wild tulips (Tulipa sylvestris) to further enhance our woodland garden.

Over breakfast, we decide to visit Remenham, where we’ve not walked for many months, as it is a bright day but might rain later.

On the way we spot a merlin (Falco columbarius) on the twig of an oak tree on the Reading road at Span Hill. I’ve only seen a few before in this country as it’s more commonly found on open moorland. It is shaped like a mini peregrine. Superb. Arriving at Remenham, we park near St Nicholas Church and then make our way slowly up Remenham Church Lane.

This is one of Rosemary’s favourite trails that she used to tread on her own before we met.

A steep bank to our right is home to white dead-nettle (Lamium album), which is already in flower, ghostly white, with buff-tailed bumblebees (Bombus terrestris) in attendance. It looks like they are having fun and so are we.

On the banks, which are marked by ancient badgers’ tracks, we spot lesser celandines, garlic mustard (Alliaria petiolata), white coloured sweet violets (Viola odorata) and purple coloured common dog violets (Viola riviniana). This will be an increasingly pretty sight before too long.

As the road rises alongside some old gravel pits, we come across swathes of poisonous hemlock (Conium maculatum) with fine, pinnate leaflets. This plant can reach 7fh high. It may be deadly but it is beautiful nonetheless. A robin looks on as we pass by.

There are some splendid views from here across to Henley Park and the woods that enclose Hambleden village.

I notice a mouse or vole hole on one bank. Enchanting. Pale daffodils are in full bloom on the opposite bank.

Rosemary spots some roe deer (Capreolus capreolus) staring at us from a nearby field. The male has a new set of still-velvety antlers that will be shed between October and December in contrast to other deer species that lose them in spring.

As we move on, there is a wonderful old blackthorn hedge, its branches covered in common orange lichen, and then a standout oak tree that signposts the footpath that will take us across an open arable field and westwards towards Remenham Wood.

As ever, it is windy up here but enjoyable, too, as we listen to the skylarks dancing above. This little bird fills us with celestial joy.

It starts to rain but this is no problem as we’ll soon hit the woods. To our right the River Thames shines like a broad, silver ribbon.

After gaining the shelter of the wood, we are presented with a raft of wood anemones bearing raindrops that look like tiny tears, a stirring sight.

The wood has changed much since last year. There are far more bluebells, not in flower yet but they have spread a lot.

We also notice far more spurge laurel (Daphne laureola) than we did last time. Primroses and dog’s mercury are abundant too.

Holly, hazel and field maple trees are shaping up. The sap is rising in the beech, oak, goat willow, silver birch, ash, cherry and sycamore trees. Yews stand firm. All is looking good.

I negotiate a stile (rather well, I hasten to add) and we head down an open meadow towards Henley Reach. It is a lovely stretch of land full of promise for summer.

In a delightful act of public helpfulness, dog walkers have bagged up canine poo and hung the contents on a barbed-wire fence. How charming. We meet Remenham Lane to find lesser periwinkle (Vinca minor) in flower, then cross the road and dip down to the river, passing some boathouses.

It is very breezy down at the river’s edge. Rosemary feeds some ducks and a swan.

As we head back to Remenham we veer off to the right to check on a huge colony of summer snowflake (Leucojum aestivum), a nationally scarce plant. The near pure white flowers are coming out early and beautiful they are, too.

Temple Island looks majestic with its wooded backdrop. Is there anything better to sum up the beauty of southern England?

We meet a dog trundling along with a small tree in his jaws. Ambitious.

On our way home, Rosemary and I pay a visit to our local garden centre (and spend loads of money again) and hear our first chiffchaff (Phylloscopus collybita) of the year. I love these little summer visitors.

After lunch, we head off again, this time to Kipping Hill, near Wyfold, as we want to see if the native wild daffodils (Narcissus pseudonarcissus) are in flower.

They are and plenty of them, too, crowding round the trunks of the equally rare large-leaved lime trees. Both are indicators of ancient woodland. What a place this is.

We check the pond in the woods. No sign of frogs or toads again. What is going on?

A song thrush sings, a great spotted woodpecker drums nearby. This is fun, spoilt only by both cyclists and walkers shouting their heads off, apparently oblivious to their surroundings.

Back home, I sit outside and stare at the sky awaiting the arrival of swifts, swallows and house martins. It should not be too long before they appear.

The fussy female magpie still seems to be annoyed, nagging her mate to go shopping for the correct kind of twig for nest-building.

Spring’s promise is tangible. Buds are bursting into leaf on our Japanese maples and everything seems to be surging.

Tiny midges zig-zag in the occasional spells of evening sunlight. It is all coming along and so welcome. Roll on summer.

I was going to get out my telescope tonight to study the moon but she has hidden herself away beyond dense clouds. I can’t wait for the clear nights to come.

Gazing at one of our bookshelves, I’ve just noticed a copy of The Observer’s Book of Astronomy that I saved up for and bought when I was eight or nine years old. Time to revisit, I think.

The opening lyrics from The Whole of the Moon by the Waterboys resonate for some reason.

Many people never seem to look at the moon, let alone see the wood for the trees.

After supper, I sit outside again to scent the local world and listen. All is quiet, so lovely. Nature is at peace and so am I.