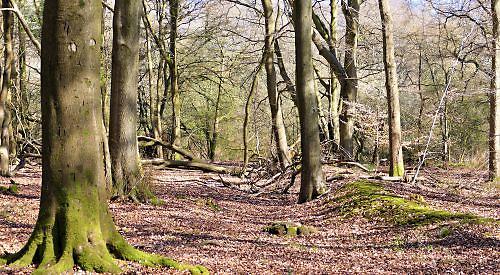 IT is Easter Sunday and as we take our usual early morning stroll around the garden, I ask Rosemary where she’d like to go for a walk as it looks to be a good day for getting out.

Straight away, she tells me that she’d like to return to the woods and lanes around Highmoor.

That’s fine with me as I’ve rarely visited at this time of year and we’ve not been for some time.

Also there should not be too many people about if we set off relatively early, which we do.

Last night we’d toyed with the idea of walking up to Temple Island and beyond on the Oxfordshire/Buckinghamshire bank but decided that it might be too busy on Easter weekend.

We’ll go there in a few weeks when migrant nesting birds should have arrived.

We park the car where we did on our last visit outside the former Dog and Duck pub (much lamented), now the site of a housing development.

Before we start walking Rosemary asks me about a small plant with yellow flowers on a damp bank. I identify it as colt’s-foot (Tussilago farfara). Similar in appearance to common fleabane (Pulicaria dysenterica), the flowers precede the leaves.

It is a little muddy here but the ground is largely dry. After a few yards the track is made up for the residents that live further on.

To our right a hawthorn is coming into leaf and open parkland beyond. To our left we pass some gnarled old beech trees. The sides of the lane are occupied by soon-to-flower bluebells, wood sorrel, lesser celandine, dog’s mercury, wood melick (my favourite woodland grass), wild daffodils and blackcurrant (Ribes nigrum) with its hairy, aromatic leaves.

We are entranced by the white blossom of cherry trees way up in their domed crowns against a clear blue sky.

We stop to see a pool of water in the bole of a beech tree, a useful little watering hole for animals and, alas, home to mosquito larvae.

We meet a charming lady with a natty looking standard poodle. She recognises us and we have an entertaining conversation. It is always a pleasure to meet people who share our love of nature.

This woodland is regenerating naturally, beech trees in particular as they fill the open spaces between their parents just waiting for their chance to replace them. This is in stark contrast to some “managed” woods I know.

There are no young oaks visible but plenty of older ones plus holly and hazel.

Plenty of dead, decaying wood lies on the woodland floor, so important for various fungi, insects and therefore birds and beasts. This is the chain of woodland life.

Talking of birds, we hear the warbling babbles of blackcaps, the melodic songs of blackbirds, robins and song thrushes, the cackles of jays and the calls of great tits. The tinkling sounds of chiffchaffs are self-explanatory.

A great spotted woodpecker drums, pheasants hack and a male tawny owl hoots nearby even though it’s daytime.

I’m still waiting, after several years, to hear the sweet descending cadences of willow warblers. I hope that it won’t be too long until I do. I worry about them as they were so frequent in settings like this when I was younger.

We walk on slowly, stopping now and again as we are in no hurry.

Then we breach Highmoor Trench and head north in steady fashion. Apart from the trench’s now diminished bump, the woodland is full of old moss-covered flinty boundaries that glint in the spring sunlight. I enjoy the thought of looking down on a piece of the past. It is reassuring.

There are some evergreen trees here too. One of three British natives is the common yew (Taxus baccata), which is scattered about, some in groves.

The two other native species are Scots pine (Pinus sylvestris), which is here, hither and thither, and the much rarer juniper (Juniperus communis), which is not present. In these woods there is the non-native but well-established Douglas fir (Pseudotsuga menziesii) and western hemlock-spruce (Tsuga heterophylla) saplings.

At a crossroads under the canopy we peel off to the right and step into a narrow path full of wild crab apples (Malus sylvestris) just coming into leaf. The trees will soon bloom and gloriously so.

The presence of goat and grey willows indicate a high water table, even though we are about 550ft above sea level. This is one of the most interesting qualities of the Chiltern hills.

As ever, we find some strange shaped trees, which lend character to this varied woodland with silver birch, old ash, horse chestnut and the odd sycamore all coming into leaf. Glorious.

Rosemary takes my hand and helps me down a steep incline as I still have a dodgy knee.

We join the bridleway and head eastwards towards Bix, meeting some polite horse riders on our way.

How clean the air seems out here despite the proximity of the A4130 that we can hear faintly in the distance.

As we continue towards the valley floor, we come across some open land to our left. A pair of buzzards (Buteo buteo) quarter the tree tops and surrounding fields. Downy birch (Betula pubescens) grows in large numbers.

The track is broad, clearly used by tractors judging by the impressions temporarily moulded on to the lane’s sides. There are some nicely spaced oaks here and plenty of spindle (Euonymus europaeus) and blackthorn (Prunus spinosa).

Laid hedges add to the allure, as do swathes of bluebells and dog’s mercury. We observe several ferns not seen elsewhere.

Then it happens. A vehicle is approaching from behind. We scramble up the right bank as the middle of the lane at this point is under deep, muddy water. The driver of the 4x4 speeds up dramatically and, obviously intending to soak us both, flies through the water that misses us by inches. What is it with some people?

We meet a cyclist coming from the opposite direction who describes the driver as “going like a bat out of hell”.

Standing close to a dead, decaying beech, we see treecreepers (Certhia familiaris) going to and fro as they feed their young. This is super as I’ve not seen these birds for a long time.

We carry on and just short of Bix Larches we take a right turn and head uphill to the south towards Westleaze Cottages and Bromsden Farm.

Meadows left and right are populated with pheasants and Scots pine form an avenue.

Reaching the hill’s crest, we pass a large colony of pendulous sedge (Carex pendula) by the cottages and find ourselves in a wide, open space and confronted with a breeze.

The hedge to our right is ablaze with the flowers of blackthorn.

Rosemary is desperate to clamber on some piles of felled timber but I just manage to dissuade her. Soon we encounter another crossroads and turn right by the lane to Bromsden and head west down a straight but wide and attractive drive.

Scots pines stand proud and a brace of hybrid black-poplar (Populus x canadensis) grace the view together with an unidentified variety of birch. Whitebeams (Sorbus Aria) shield us from sinister Scaffold Wood lurking to the north and an oak seems to be dancing a tango.

At the end of the drive we pass some heavy machinery to enter more woodland to the west. Before we do so we stand to admire the lovely scene. Silver birches are coming into leaf and below them blackthorn and gorse are in flower. Splendid.

We enter Holly Grove and meet a vast carpet of bluebells — what a sight. We agree to return in a few weeks’ time to see the flowers. It is a wonderful prospect.

Along the way are some sycamores with unusual hollow trunks, which may be useful for bats. A little further on we find more old Douglas firs sporting most queer boles and some wonderfully contorted oaks. There is one massive old oak, nature’s warden of the forest. Rosemary gives it a pat of love.

We arrive at a large patch of rhododendrons. Whoever planted them is a mystery but they seem old and exotic, a bit like us with English, Irish, Portuguese, Norwegian and Spanish blood coursing through our veins.

We are mongrels, as are most of us, and all the better for it.

We both hope that you all had a happy Easter.