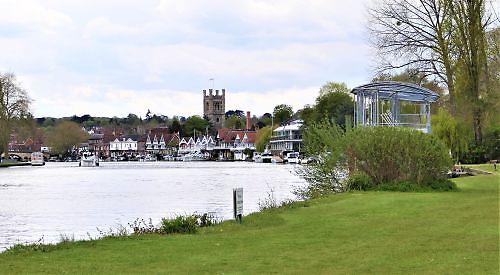 OVER breakfast I ask Rosemary where she’d like to go for a walk later this morning.

She suggests that we could go to Henley and head towards Greenlands Farm and Mill End along the Oxfordshire/
Buckinghamshire bank.

We had considered doing this some weeks ago but at the time I guessed it would be muddy so we decided against a visit. It should have dried up considerably by now and if we are in luck we should find many spring flowers in bloom.

We can also check on the waterfowl that, according to some recent correspondents of the Henley Standard, have been disappearing due to the predation of red kites.

We park at Henley Rugby Club and cross Marlow Road with caution. Passing the perimeter of Phyllis Court Club, we see a few people playing tennis within.

As we pass the old plane trees that form an avenue to Fawley Court, it is great to see folk also taking exercise.

We have not taken a walk in this area since last July and I’m excited by what we may find.

After passing a large hawthorn covered with soon-to-emerge blossom, we approach the river. It looks healthy as the water is gin clear with clean reflections.

I love the little sandy beaches as they are lapped with a fluid caress. There are no fish fry in the shallows yet but they will show up before too long, I’m sure.

Men and women are sculling. Good for them, I think, as it’s a great way to keep fit, especially in such spectacular surroundings. Is Henley Reach bettered anywhere in the world? I doubt it. We continue north through the short turf full of daisies, selfheal (Prunella vulgaris), white dead-nettle (Lamium album), common field speedwell (Veronica persica) and perennial silverweed (Potentilla anserina).

“Anserina” means “of the goose” (Anser), either because the plant was used to feed them or perhaps the leaves are a reminder of the bird’s footmarks.

Not yet bearing its five-petalled yellow flowers, the leaflets are covered on the underside with silky, silver-like hairs. An attractive creeping plant, it has had many uses from a shoe-lining to warding off evil spirits.

The turnip-like roots are edible. After a thorough scrub, they can be boiled or roasted. They can also be used to produce flour for thickening or baking. The roots are rich in magnesium and phosphorus. We continue through the meadow in the direction of Fawley Court and cross our first solid bridge over a tributary graced by a thorny dog-rose but, sadly, marred by floating litter.

Along the riverbank, alders, white willows and a lone sycamore rise above or lean over the sparkling surface of the Thames. A couple of boats are moored up in between “private” fishing signs.

A grey heron with his dagger-like bill, a notable killer of ducklings, flies westwards high above, neck tucked in.

We see herring gulls, too, another species that predate on ducklings and the young of coots and moorhens.

The turf is very short, rabbits performing the function of a lawnmower. Overhead a buzzard is ready to pounce, given the opportunity. We think that Mr and Mrs Bunny must be snuggled up in their warm warren to the side of the tree line to our left, full of alder, white poplar and horse chestnut. A mole has been busy, too, throwing up little hills.

Carrion crows walk up and down the riparian meadow, steely-eyed, ready to devour anything that they can spot. I like crows — they can make a nuisance of themselves but they are so clever, as are all members of the corvid family.

Tight to the riverbank wild angelica (Angelica sylvestris) is bursting forth, similar in size to alexanders (Smyrnium olusatrum), a very rare plant in Oxfordshire that I spotted in Colmore Lane, Kingwood, recently.

Pendulous sedge (Carex pendula) is abundant, as is marsh woundwort (Stachys palustris) that will flower in June. A Canada goose hassles Rosemary for some bread and she obliges. Wholemeal, of course.

We cross a raised wooden walkway that takes us over another tributary through a brick and flint tunnel into the grounds of Fawley Court. I wish that the drops weren’t so pronounced.

The blue tapes that pronounce the right of way to either side are still present. I think this is silly as people that walk this route are respectful.

There is a fine horse chestnut here with Lombardy poplars and holm oaks.

Thankfully, the ground is mostly dry as we pass the reddish edifice to cross the “new” wooden pedestrian bridge over another gleaming tributary.

Until this point, we have only met about four other walkers, which is good as we do not like congested walks.

I spot some marsh marigolds (Caltha palustris) with lush, kidney-shaped leaves and bright yellow flowers more than 1in wide and as open as can be. Glorious.

Dawn redwood trees have been planted to our left, as we noted last summer, but very close together. They deserve more space to reveal their true potential.

Further along at another tributary crossing we see moorhens, coots and tufted ducks. Mute swans glide past as if in full regalia, wings raised. All looks as it should. Some of the birds are making quite a racket.

We meet a gate that takes us into a Site of Special Scientific Interest and you can quickly see why as everything changes at this spot. The land is now truly wild and ancient. The withies to the far left are coming into full leaf.

Birds are singing. One in particular is a whitethroat (Sylvia communis) rattling off a distinct metallic melody in a thicket by the riverside. I spot the little bird and point him out to Rosemary but he moves far too quickly for her to take a photo of him.

The meadow is large and expansive. Chiffchaffs and blackcaps sound off and I think I hear a reed warbler.

Cuckooflower or lady’s smock (Cardamine pratensis) is abundant with its pinky-white flowers. It is the food plant of the caterpillars of the orange tip butterfly (Anthocharis cardamines). No wonder so many are flying about today.

I have never seen such a broad expanse and quantity of this plant anywhere else.

It is an exceptional place that will delight any walker with botanical knowledge or not.

A large dead elm tree stands like a woodworm-infested totem pole with neatly rounded woodpecker holes. Near the top a large cavity is being used as a nest site by a pair of kestrels (Falco tinnunculus).

A red kite soars above, the sunlight catching its russet hues, the head greyish and the deeply-forked tail chestnut red. It is one of only two that we see today.

Everywhere we look and listen is a delight, flowers in bloom, the songs of birds, the sweet scent of the river. Unbeatable.

Making our way towards the final wooden passageway with a walkway down another steep dip we stop to scan this side of the Thames upstream of beautiful Temple Island. It seems like heaven on earth.

Tufted ducks dive and resurface. They are attractive but daft-looking birds, the males sporting a rather silly-looking mullet haircut. It is good to see a decent population here.

Mallard ducks quack and are only too happy to take advantage of Rosemary’s benevolence.

We find a large colony of Loddon lily or, as referenced in my flower books, summer snowflake (Leucojum aestivum). A very uncommon plant in Britain, our area is a stronghold.

The plants are at their peak now, the bell-shaped, whitish flowers with green marks to the tips unmistakeable.

We attempt to enter the last field towards Marlow Road and onwards towards a glorious freshwater pond that feeds into the Thames but are thwarted by a huge muddy puddle.

We make our way back discussing the wonders that we have seen and heard and as we approach the road again, a little robin seems to wink at us.

Our local landscape is not just beautiful but precious. It’ll look after itself if we allow it to, so let’s do so.