From our flourishing back garden to giant, ancient rhododendrons 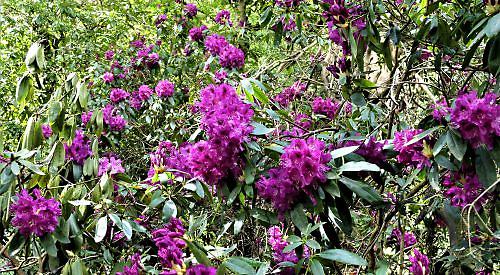 I COME downstairs this morning to find Rosemary staring through a window from the kitchen into our utility room.

She indicates a blue tit that has flown in through one of the open quarterlight windows hunting for spiders or anything else for that matter. After a brief investigation, it flies out again.

The little bird is one of a pair that have set up home in one of the nest boxes we installed. What a start to the day.

The garden is looking quite beautiful at the moment. The deciduous trees are full of fresh leaves from deep, intense red to green and pale yellow.

Our native 20-year-old field maple is looking very healthy. A cultivar of sycamore, Acer pseudoplatanus ‘Brilliantissimum’ is glorious, displaying pinky-yellowish leaves, enhanced by sunlight shining through the new growth. It’s the same with its neighbour, Acer drummondii, with variegated green and yellow leaves and Crimson King with its dark red foliage.

All of our acer palmatums, some in the ground, others in large earthenware pots, seem to be enjoying life, as is the Acer shirasawanum. Our largest rowan is in full flower too.

As the season progresses, hairy-leaved and stemmed wood forget-me-nots are taking up the baton from primroses and cowslips to create a sea of blue.

Ferns are growing rapidly, fiddleheads everywhere, notably on the male, lady and soft shield species. Other ferns, the evergreens, including hart’s tongue, polypody and hard fern, look happy too. All are natives.

We have plenty of exotics as well, a great mixture, which all lend charm to the garden. Foxgloves and mulleins are reaching for the sky, soon to erupt. Woodruff is spreading like wildfire with its little white flowers, feverfew is popping up all around, as are garlic mustard, goldilocks buttercup, yellow pimpernel, hound’s-tongue, comfrey, wood sorrel, sanicle, enchanter’s-nightshade, white dead nettle, bugle, lungwort and tutsan, a bushy species of Hypericum.

Dusky crane’s-bill (Geranium phaeum), a rather uncommon plant, green alkanet and red campion, perforate St John’s-wort and greater celandine seem to have decided to form permanent colonies. This is what happens when you let your garden go wild with little intervention.

The few people who have visited have been stunned by what we have achieved and it will only improve.

We are so lucky to have such an array of flowers. I’m astonished every morning as there is always something new to admire. I believe that many of our plants have found their way in through seeds that have dropped into Rosemary’s turn-ups and hitched a ride, poisonous hemlock being just one example.

All the specimen trees that we have planted are growing fast, including the native whitebeam, oak, large-leaved and small-leaved limes, beech, wayfaring tree, crab, wild service and the North American red oak.

We also have some youngsters in pots, wych elm, downy birch and alder, that we’ll plant out later.

Goosegrass, or cleavers, is a problem, as is white bryony as both are running riot in the hedgerow that we planted last year. They seem intent on strangling some of the young trees and shrubs, so we’ve had to remove this year’s growth to a large extent.

I will have to trim the hedge in early summer after the bird-nesting season and once again in late winter to thicken it up. It’s looking good.

Rosemary suggests that we head out to Lower Highmoor to take a look at the old rhododendrons that grow by a crossroads in the woods.

Before we go I refer to a message from Susan Byers, of Nettlebed, who suggests that they may have been planted by Peter Fleming, the author and intrepid explorer and brother of Ian of James Bond fame.

We park up by the Nettlebed Estate headquarters under a surging, light-green, translucent beech canopy.

We walk south-east down a gravelly lane. I notice a spotted crane-fly (Nephrotoma appendiculata) on rough chervil (Chaerophyllum temulum) with a diminutive insect friend.

There is much that meets the eye here. Hawthorn is bursting into flower and below are greater stitchwort, bluebells, dandelions, common figwort, hairy bitter-cress, greater plantain, herb-robert, spear thistle and ground ivy flourish.

We enter deep, welcoming woodland. Beech trees dominate but there is much more within — scattered silver birch, yew, oak, ash and hazel. Bluebells cover the ground in extensive drifts. Their scent is subtle but sweet.

We revisit an old pond, now covered with common duckweed. Two women approach as we study the water, a border terrier leaps into the water.

But where are the willow warblers? Please let me know if you hear one as I’m a little perturbed, I’ve not heard one for two years now and it is upsetting.

Heading on, we come across the first rhododendrons that I wanted to reveal. They are something special, some bearing deep red flowers, others near-white and obviously old.

The spectacle reminds me vividly of a sequence in a film adaptation of H G Wells’s novella, The Time Machine, starring Rod Taylor. He emerges far into the future to find himself in a world full of beautiful flowers. That is what we see today. I cannot think of anywhere comparable, unworldly and beautiful.

Do not forget that I’m all for natives but this place holds an unfathomable magic. I love it for its singular existence.

Some of the shrubs, or in this case trees, are upwards of 30ft, just coming into flower.

We meet an old crossroads in the woods that I remember well. To our right a path leads westwards through a bright clearing full of young silver birch and flowering gorse. A pair of Douglas firs rise high in the background above more rhododendrons.

The familiar path to our left leads towards Bix. We choose to take the path south as neither of us has been down it before.

There are even more rhododendrons on our way. We meet a towering Scots pine and ferns are scattered here and there to either side, the common male (Dryopteris filix-mas) and uncommon golden scaly male (Dryopteris affinis). Bluebells stretch beyond and bumblebees are having a fun day out.

A twisted oak appears to be dancing like a Dervish, such a strange but attractive shape. Woodbine climbs any foothold available.

We encounter a huge giant sequoia or Wellingtonia (Sequoiadendron giganteum). We have one at home which is relatively large. By comparison this specimen is monumental.

A native of the Sierra Nevada in California, it was first discovered in 1852. I’ve no idea how old it is but it is still a youngster, obviously. Further on, we come across another exotic conifer. I’m puzzled. Rosemary thinks it is Brewer’s (weeping) spruce (Picea breweriana), a native of western USA.

It’s a strange-looking tree with drooping branches. We collect fallen cones and leaves for me to examine later on.

A little further on we turn right into Holly Grove. It is a wonderful wood with a high proportion of field maple, cherry and occasional rowan. We have it all to ourselves.

We walk back to the car. It has been a great morning.

On the way home, we visit our local garden centre at Playhatch and buy seven terrestrial orchids to plant out — Pleione hookeriana, named after the Hookers of Kew, originally from Nepal and China, Calanthe discolour from China, Japan and Korea, and Cypripediums just coming into flower. They appear to be Cypripedium acaule from North America, the provincial flower of Prince Edward Island, Canada.

When planted we will install temporary guards around them.

Today (May 20), would have been my father’s 89th birthday. He died in Australia on December 3, 2018, aged 86. Rosemary and I travel to Marsh Lock and throw a tribute to him into the water. Thanks, dad, for all your love and good advice.

We witness a pair of hobby quartering the water. I see a single mayfly.

Let’s all hope for a flaming June after a dry April and an incredibly wet May.

By the way, I examine the cones, needles and fronds gathered at Highmoor, peer at them and check my books. There is no doubt, we were both correct.