Revisiting an old haunt and enjoying the magnificence of trees 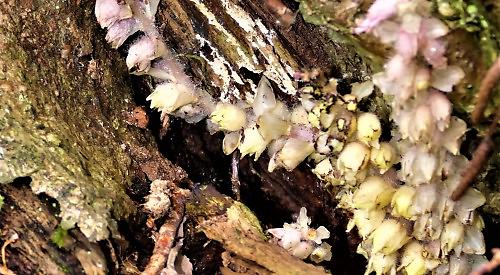 AS we wander round the garden, I take a good look at the rare trees that Rosemary acquired before we met.

Four are prehistoric and some only known from fossilised imprints then rediscovered in relatively modern times.

They are as follows:

Dawn redwood (Metasequoia glyptostroboides), the only living member of its genus was found in 1941 in central China. The species dates back to the Mesozoic Era. A fast grower, the tree can reach 120ft in height.

Ginkgo or maidenhair tree (Ginkgo biloba), is also from China. Once again, the only remaining species of its genus, it dates back to traces found from 190 million years ago in the Jurassic Period.

Monkey puzzle or Chilean pine (Araucaria Araucana) is another endangered species in the wild. It is also Chile’s national tree. Yet another ancient tree, it is related to the Norfolk Island pine (Araucaria heterophylla), a native of the external Australian territory and former penal colony that lies in the Pacific Ocean between New Caledonia and New Zealand. It can grow to more than 200ft. Ours is very young at about 3ft and growing in a pot.

Both the last two trees’ ancestry dates back to when Australia, Antarctica and South America were linked by land. All three continents were once part of what is now called a supercontinent, described as Gondwanaland, that existed some 300 million years ago.

The huge portions separated over millions of years, drifting apart to form what we know today. Who knows, they may reunite once again in the very distant future.

Wollemi pine (Wollemia nobilis) was discovered in Australia in 1994 and is a direct relative of the last two and can reach 130ft in height.

Ours is somewhat smaller, a mere 5ft, but attractive and healthy. The plant’s lineage has been traced back to the Early Cretaceous. It’s incredible to think that these were growing way back when dinosaurs existed.

We have accepted an invitation to visit Chambers Copse, which is north of Emmer Green. I mentioned it here some weeks ago.

It is owned by John-Joe Cottam whose father Dave is an old acquaintance from the Eighties and at one time Rosemary’s dentist. Such a small world.

I remember an unforgettable party that Dave held here back in 1990 over the late May bank holiday to “fortify the over- forties”. We’d all chipped in for the beer that was dispensed from a barrel inside a barn. I recall being told off by an off-duty female police officer for drinking a pint high up in an ancient hazel bush with a couple of pals.

John-Joe is accompanied by his friendly dog and we proceed on a tour of his woodland.

The first thing I notice is the large amount of native box seemingly unaffected by the ravages of the box tree moth (Cydalima perspectalis). It is good to see such a large and healthy spread of this attractive, evergreen shrub.

What is more surprising is the varied ground cover as we enter from the south side going uphill.

A large quantity of yellow archangel is mixed with bluebells and dog’s mercury underneath ancient hazels and grandiose, broad-trunked cherries, their striated bark peeling. This is lovely.

John-Joe is concerned about the huge hazels, boughs so big and heavy that a lot have come crashing down to the ground.

This is a difficult one as our host is wondering if it would be a good idea to resume the old technique of coppicing.

I believe that really old specimens like these would not respond very well.

I call our pal Dave Kenny who recommends taking out most of the obviously weakened, weighty parts, wait for regrowth and then, after a few years, repeat the process on the remainder.

Sounds sensible to me and I pass it on to John-Joe. In any case, if he does decide to proceed we’ll lend a hand and place brush from the top of the coppicing around the new stumps to prevent deer from grazing on the new growth as he has a problem with their incursion, both roe and muntjac. I’ve seen this method used at a real working coppice, a rarity these days, at Garsons Hill, near Ipsden, applied to old hazels and ancient ash boles.

We explore the north-eastern side. There are some stand-out trees here, many very old — broad-spreading beech, crazy-shaped, warty field maples and rangy oaks.

It is as if nothing has changed since I first ventured here as a teenager, except I don’t hear the soothing purrs of turtle doves and the squeaky phrases of spotted flycatchers. I hope they will both return one day.

The sheer amount of old hazel is astounding. I guess the copse must have been a working one up until the outbreak of the Second World War.

A large population of common male ferns is notable. I also spot some narrow buckler fern (Dryopteris carthusiana). It is so green here.

The three of us head daintily through the forest floor trying not to harm the plants, which is difficult.

Then we meet a path that features on my Ordnance Survey map as a public right of way. It is not. Why the map is wrong is a mystery.

As we emerge, treading carefully through the luxuriant undergrowth, we find open country to the north.

A line of oak trees over the perimeter of the copse defines a field border. I wonder how long they have been here as they look old.

We admire the stout, silvery trunks of mature hornbeams that shield the woodland from the north wind like indomitable knights of yore, unmoveable, stubborn and resolute, some leaning as if bearing lances. Hawthorns and hollies form part of the copse’s boundary.

Formerly coppiced common limes in the copse’s centre are multi-trunked, the heart-shaped leaves a pale yellow-green glowing in the sunlight.

There is plenty of fallen, rotting timber on the forest floor that is such an important component of a healthy wood.

Insects like stag beetles (Lucanus cervus) depend upon it. The females lay eggs in the decaying wood (preferably oak), then the larvae munch away for up to six years before turning into pupae.

After about three months the beetles emerge as adults and fly off to find a mate. Competent flyers, they make a strange buzzing sound but, sadly, they live only for a few weeks.

Many fungi also rely on this dendrological resource, returning nutrients to the woodland soil. The cycle of life rolls on.

We are now close to an abandoned water tank, lying on its side, below a grove of yews.

To the right, where the land dips, is a small colony of stinking hellebore (Helleborus foetidus). Today the plants must be enveloped by some tall nettles. I’ll have to return next spring to show John-Joe.

I indicate some vigorous downy birch trees (Betula pubescens). The silver birch (Betula pendula) is also present in good numbers. I like them both. The downy’s trunk is unlike that of the silver in that it never presents rectangular plates. Instead, the bark is uniformly smooth, the leaves fluffy.

John-Joe points out what appears to be an avenue of yews.

I mention that the very odd-looking toothwort (Lathraea squamaria) is present. He promptly finds it on an old hazel.

Normally parasitic on hazel roots, it is growing out of fissures in the trunk. It is a very strange plant and there is plenty of it too.

We find some little piles of hazelnut shells which I examine as there is a sure-fire way to determine which animal has been eating the nuts.

I’m pleased to relate that in this case it is the endangered hazel dormouse (Muscardinus avellanarius) that is responsible. The holes on the sides are neat and smooth-edged with few teeth marks. This is good news.

John-Joe says he’s sure that he has seen some at dusk, so we agree to install a couple of dormouse shelters for the critters. Let’s hope that it will help.

We leave our host, agreeing to return. It’s really positive to meet people who want to ensure the future of a unique wildlife site.

Back home after supper, Rosemary and I sit out in the back garden watching bats, common pipistrelles (Pipistrellus pipistrellus) and much larger noctules (Nyctalus noctula) as they flit about in the setting sun. It has been a great day and we’ve made some new friends.