Hurrah! Orchid season has begun but flowers are later than normal 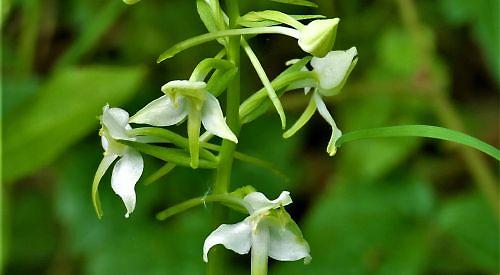 IT is now the time when the majority of our wild orchids come into bloom.

Knowing this, Rosemary and I propel ourselves on a concerted mission to cover as much ground as possible over these special weeks to see what we can find. (I’m what you’d call an “old hand” at this enterprise.)

We will search, record and report on the precious plants that we discover and much else that we come across along the way.

I believe that many of the somewhat elusive and semi-exotic appearing species are overlooked as some are hard to spot, identify and not generally recognised.

In addition, many attractive and important native species can be found along the way, from towering honeybee-filled trees to tiny flowers. It all fits in like a jigsaw with no missing pieces.

Noting and identifying their presence is a very important measure in preserving our local environment as it leads to a wider understanding of the relationships between fungi, flowering plants and trees, the wholeness upon which we all depend.

Find a wild orchid and you may have found a precious spot of land as it always tells a cogent story.

Rosemary and I are both struck by the less observant people that we pass on our walks. Walking or cycling past, they always seem to be shouting.

Our intention over the early summer weeks is to explore as much of open chalk grassland, ancient meadows and, equally and importantly, old woodland banks and boundaries as we can.

Some orchids flower early in spring before the leaves of trees are fully out, notably, the aptly-named early purple (Orchis mascula), one of our favourites. Their flowers smell of cat pee, which may be a clue to their endurance. Other orchids are to be found in late May, in particular the secretive, neatly-concealed fly orchid (Ophrys insectifera), the common twayblade with its drab green but intricately-formed flowers, once classified as Listera ovata but now Neottia ovata, and the white helleborine (Cephalanthera damasonium) with flowers that look like the eggs of a black redstart (Phoenicurus ochruros).

The majority of our natives break out in June. The common spotted (Dactylorhiza fuchsii) and bee (Ophrys apifera) being prime examples.

July and August are the months in which to find helleborines, the broad-leaved (Epipactis helleborine), the green-flowered (Epipactis phyllanthes), the narrow-lipped (Epipactis leptochila) and the violet (Epipactis purpurata). Each has a special requirement and association with soil, shade and an old fungal friend.

Towards the end of September, we are sometimes graced with the extensive, entertaining spectacle of swathes of autumn lady’s-tresses (Spiranthes spiralis) on an open, short-turfed hillside.

Because they are rare locally, I will not reveal their exact location but will share some photos later in the year if they announce themselves once more.

We return to the glorious Warburg nature reserve at Bix Bottom I wrote about last week. Much will have progressed in only a few days. We are not disappointed.

I cannot but think that this is how a majority of the south Chiltern landscape would have looked like many centuries ago.

My Warburg Reserve Species Handbook of 1988 outlines how the present reserve has changed in land use and habitat distribution since 1768 when about 30 per cent was woodland.

In 1877 tree cover increased but much of the land was arable or grassland. By 1963 most was woodland or scrub with patches of meadow. Not much has changed since then.

The reserve is tucked into a horseshoe-like valley with steep hills to the east, north and south.

We make our way along Great Hill Ride. The cowslips are nearly over but twayblades are in full throttle.

Rosemary spots a common spotted orchid nearly fully out. This makes her very happy as she has beaten me to it.

I look hard for pyramidal and bee orchids but find none but then everything seems to be late this year.

As we move on towards Big Ashes Ride, I’m taken aback to find a large quantity of greater butterfly-orchids (Platanthera chlorantha) in flower, candle-white.

The lesser butterfly-orchid (Platanthera bifolia) grows here too but we don’t find any today.

I spot dozens of fly orchids, some tall with five to six flowers. What a difference a week makes. I’d spotted the leaves before and here they are in full flush.

White helleborines are making their presence felt too.

We stand to admire some old silver birches and the mixed woodland of Juniperhill, which contains a large badger sett.

We turn left down the official nature trail through Lower Big Ashes, a lovely path with a convenient wooden bench halfway down.

The forest floor is a green sea full of large male ferns and wood spurge. Speckled wood butterflies dance in the light and a soldier beetle sits on a fern’s pinnule. The small, yellow flowers of wood avens (Geum urbanum) are popular with little insects.

We reach the bridleway at the valley bottom and head east along the now dry route. Two people, the first we have seen, step out from the left some 100 yards in front of us. They’ve been to a bird hide that is tucked away looking out on to a pond, a nice feature.

As we make our way back to the car, I point out a carpet of green hellebore (Helleborus viridis), a scarce local plant that will have finished flowering weeks ago.

There is so much of the day left to us so I suggest that we head to Hailey, near Ipsden, and visit another nature reserve, Warren Bank, which we last went to in March last year. I’m keen as I have seen large numbers of bee orchids there many times over the years.

We leave the car in the overflow car park of the King William pub (with permission) and walk uphill past Hill Farm towards Bixmoor Wood.

We are greeted with the songs of skylarks, chaffinches and yellowhammers.

Hawthorn and whitebeam trees are in flower. Black bryony clambers over buckthorn. It all smells lovely. We spot a solitary white helleborine.

We move on and at a fork we turn right, down a track lined with some curious looking beech trees. We head on a few hundred yards towards some pasture that we need to cross to enter the reserve.

After passing through a broad gate, we’re in the wide open. The views across to the Berkshire Downs are spectacular.

The grassland is full of sheep with lambs. They scuttle off as we cross the grass to the wooden entrance gate to Warren Bank. Thankfully for me, there is a gate, not a stile, and after closing it behind us we walk through a scrubby area to be presented with a sublime panorama.

The steep-sided reserve is a little relic of the chalk grasslands that were once extensive in the Chilterns. It comprises three paddocks and is full of anthills and holes in the ground.

I’m glad that I have my walking pole with me but still need to take Rosemary’s hand much of the time.

As we reach the end of the second paddock, I find the ground too steep and sit down on the remains of a stile for which I’m grateful for once and take a break.

I indicate to Rosemary the corner of the third paddock, where I have recorded bee orchids in the past. She takes off as I study the flowers around me.

Apart from the orchids that we found at the Warburg, many of the plant species are unsurprisingly similar with the addition of yellow-wort (Blackstonia perfoliata). Common in the south, it is not quite in flower.

After about 10 minutes Rosemary lets out a shriek.

“There it is,” she shouts. It’s the first bee orchid she has ever seen.

On our way out of the reserve we spot a dingy skipper butterfly (Erynnis tages).

We regain the bridleway and as we head back we find a permissive one parallel to the one that we ascended.

The open sweep of the land to our left undulates. We come across some long-headed poppies (Papaver dubium).

When we return to the car the pub is overflowing so we head home for lunch. It has been a special day. We’re both happy.