Peaceful and beautiful hillside meadows being reclaimed by nature 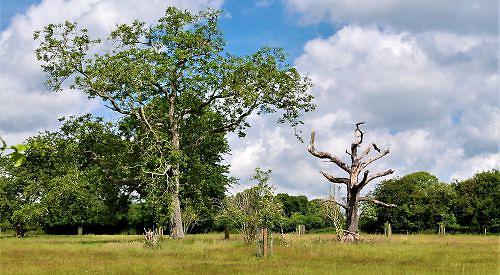 AFTER a short drive from Caversham, we arrive in Goring Heath and park opposite the former (and much missed) King Charles Head pub, which is now a private house.

We head westwards through a small paddock and after passing around a large, fallen cherry, enter Collinsend Common and are greeted by two shaggy-hooved horses.

It is a charming common, full of dense patches of undergrowth, mainly bramble and elder, ideal for nesting birds.

The level ground is covered with flowers that include large swathes of selfheal (Prunella vulgaris), meadow buttercup (Ranunculus acris) and daisies (Bellis perennis). A fine sight.

We leave the horses and meadow behind and walk through a wooden gate into a lane that passes Rose Cottage.

An old orchard lies beyond. It contains some ancient cherry cultivars and common walnut trees (Juglans regia) with some new additions. Sheep relax in the shade.

Underneath the hedge we find some sturdy, rangy pyramidal orchids (Anacamptis pyramidalis) nearly as tall as those that I found in Portugal back in the Eighties. A great start to our walk.

Foxgloves (Digitalis purpurea) poke out here and there, buzzing with bumblebees. We meet a crossroads and head straight on through an avenue of cherry trees with slowly ripening fruit. Much extracted timber has been removed from the great stacks that we saw last year.

Stopping at the elegant Holmes’s Farmhouse, we turn right and westwards down a rambling, winding lane.

There is a large quantity of healthy young English elms (Ulmus procera) rising defiant among their dead siblings. Maybe, as has been suggested, they are not individual trees but one single plant.

Hogweed (Heracleum sphondylium) is coming into its own, the umbels attractive to flies, here a common greenbottle (Lucilia caesar).

Skylarks sing high above. This sound always brings joy to my heart and Rosemary’s too.

White bryony (Bryonia dioica) with its greeny-white flowers clambers throughout the hedgerows.

White campion (Silene latifolia) is fully out, the flowers a pure white, black horehound (Ballota nigra) with its pinky-purple flowers is abundant, poisonous bittersweet or woody nightshade (Solanum dulcamara) scrambles about with its small purple flowers and mugwort (Artemisia vulgaris) is running riot.

According to one of my reference books, The Forager Handbook, a guide to the edible plants of Britain by Miles Irving (2009), it is “A medicinal herb: the leaves are used to stimulate appetite and bile flow”.

Common mallow (Malva sylvestris) with purple-veined flowers grows in huge clumps and white-flowered hedge bindweed (Calystegia sepium) is visited by a tiny, common masked bee (Hylaeus communis). It is hard to believe that a bee could be so small.

Strolling along on this blissful summer morning, we pass Keeper’s Cottage and meet a pair of over-excited small dogs before turning left south-westwards into a large meadow.

Last year there was a pair of horses in here but today there are none.

The land seems to have been left to its own devices, so nature is taking over and it looks good. The open country seems to be reclaiming its birthright.

Goat’s-beard (Tragopogon pratensis) and common sorrel (Rumex acetosa) are rife and a multitude of grass species, including soft-brome (Bromus hordeaceus) ripple like the sea.

Large drifts of red campion (Silene dioica) are joined by their white cousins. I’ll bet that we’ll find some hybrids next summer.

A gate leads to a wooded area to our left, a vast expanse of untended open country to our right. Common poppies (Papaver rhoeas) are mixed with white campion.

After meeting another gate, we descend into a glorious meadow. Hound’s-tongue (Cynoglossum officinale) has flowered and is now bearing bristly, hooked nutlets. This is how it must have found its way into our garden.

We admire a strong, lone oak tree standing proud with uncharacteristically yellowish leaves that I put down to the poverty of the soil.

Making our way down an attractive twisting path to the valley floor, we look across to the narrow country lane that leads to Path Hill.

The meadow is devoid of cattle or sheep. Once again it seems to be reverting to nature’s command with more pyramidal orchids popping up. It looks wonderful.

We then climb the hill towards Pathhill Farm. It’s a bit of a slog but well worth the effort. Turning back to face where we have walked, we see a different aspect to the land. This rolling countryside can take your breath away. Swifts sear through the sky like small scimitars, screeching as they pass.

After walking through a small woodland, we reach a road that leads to the farm. The track is full of greater burdock (Arctium lappa) with its large, heart-shaped leaves, only locally common in southern England and South Wales.

Hedge mustard (Sisymbrium officinale), with its four-petalled, tiny, yellow flowers, dots the spaces below the hedgerows.

At Pathhill Farm we turn left and enter another flowering meadow where there are more pyramidal orchids. I have not seen them here previously. Once again, a case of nature reclaiming the land.

Many species of insects are literally having a field day.

At the bottom of the hill we gaze upon the lone oak once more and I’m reminded of the lyrics of U2’s song One Tree Hill, from the album The Joshua Tree.

I’ll see you again when the stars
fall from the sky
and the moon has turned red
over One Tree Hill.

After skirting some young woodland on our right, we proceed up a steep slope towards another gate leading to an older wood dominated by beech.

We stop for a breather to the side of some wayfaring trees (Viburnum lantana), one of our two native species. The views here are really special too.

Rosemary helps me up the slope into this small but enchanting wood, where there is an excessive amount of alien cherry laurel encroaching.

Emerging into the open, we have a clear view of Holmes’s Farm, solid as a rock, and skip towards it through yet another meadow. Several years ago, I was walking here and inadvertently kicked up insects which were seized upon with relish by swallows skimming my ankles. There are no swallows today. Where are they, I wonder?

Approaching the farm, we spot some dark mullein plants (Verbascum nigrum) in full glory, the flowers yellow with purple hairs on long spikes.

We also find some clumps of musk thistles (Carduus nutans), which are also only locally common in England and parts of Wales. They have big, broad, solitary, purple nodding flowers and are beautiful.

To one side red and white clovers make for a lovely sight with meadow buttercups. I spot a member of the daisy family that looks like corn chamomile but the leaves are not quite right.

An old pig-sty is nearly overgrown with brambles.

We step into an ancient lane that flows up from the depths of Bottom Wood. A very old thoroughfare, it is a classic holloway with deep banks worn down through centuries of droving and cart traffic.

As we head back to the car, Rosemary points out a huge oak tree in the centre of a field that reigns supreme despite having lost a huge branch. I have stood by it and think it must be at least 600 years old.

Outside the farmhouse, we find agrimony (Agrimonia eupatoria) and perforate St John’s-wort (Hypericum perforatum) with their delicate flowers.

We then make our way through the avenue of cherries back to Collinsend Common. The horses are nowhere to be seen.