Privileged to witness the miracle of subtle but significant revolution 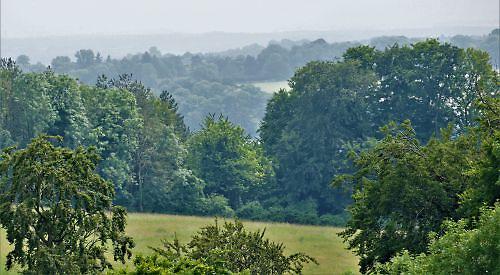 WE travel to the Sun public house at Hill Bottom near Whitchurch Hill to meet our friend, farmer Jon Hatt and his wife Kate. We are treating them to lunch. Jon runs Coombe End Farm.

There is something very homely about the interior. A bare wooden floor, no music, no television, no fruit machine. The pleasant local behind the bar tells us that the pub has been reupholstered and repainted during lockdown. How well it has been done, very fresh and comfy. Rosemary loves it and so do I.

We’ve agreed to catch up with Jon not only out of friendship but to visit the coombe that he has largely and almost, singlehandedly turned into a wildlife haven. That’s the spirit.

Jon bowls in just after 1pm, as exuberant as ever, followed by his wife. The menu is old-fashioned, straightforward fare which we like. Jon and Rosemary order ham, egg and chips, Kate and I choose scampi. It is very good.

We eat and chat over a pint. Jon and Kate have to shoot off as he has a very busy diary. We meet up briefly again at the coombe but not before having a good gander around the pub car park, lawn and outdoor seating area.

A gate at the north end reveals panoramic views over open countryside towards Great Oaks. The grassland that we see seems to have been scythed and is full of rooks and jackdaws seeking sustenance.

At one point, Henley-based Brakspear intended to close the public house, convert it into a private residence and build houses in the grounds. But Richard Hazell, the founder of Hazell & Jefferies, a road resurfacing firm near Woodcote, bought the pub outright.

On entering the pub one day soon after the purchase, he was told that he was barred. Well, you cannot bar the owner, as was explained. Bully for him. He has saved a lovely pub, a community asset.

We jump into the car and head to Coombe End Farm and park on a corner. The lane towards the coombe is full of flowering privet, it has a distinct, sweet perfume. Honeysuckle threads through the hedgerows, field-roses are in full bloom. Jon stops in his distinctive car briefly and then zooms past into the declination. He knows where he’s going. It is a bit like watching a cartoon on TV.

We have to walk around a prominent tree-lined, deep dip in the land. Last year, Jon indicated a large badger sett within. Leaves on trees occlude our view. It is a mighty drop.

Rounding a corner, we spot Jon far below, his car down in the impressive dip. He is pulling out common ragwort (Senecio jacobaea). He’d explained over lunch that he would not be able to sell a hay crop that contained a vestige of the plant as it is poisonous to cattle and horses.

The views from the top of the coombe are impressive. Last year, we walked through fog which was moderately entertaining, today all is clear. We can study the contours of the Berkshire Downs that rise on the other side of the River Thames that lies below our elevated viewpoint. It is quite a beautiful panorama.

Rosemary and I descend the coombe slowly, as we are scanning for plants. We find some attractive sainfoin (Onobrychis viciifolia), a member of the pea family. I love the pink flowers that bear deep red veins. It also can be found locally in parts of Reading Golf Club, but for how long?

We find pyramidal orchids as Jon pulls up and decimates the ragwort with supreme determination. A man on a mission fortified by good food.

Jon has printed out some maps of his farmland which indicate where he has found some interesting plants. We’ll need to return soon to explore his territory further.

The landscape is beautiful, we feel honoured to be invited to visit whenever we want to. Of course, I’ll always telephone Jon in advance as he will in all probability want to join us.

I’m so happy to have become friends with a man that loves the land like we do. It is so reassuring to know how much he is investing in myriad ways to preserve this stunning part of our Chilterns.

We part company, wave farewell and head off to see a mutual friend on the way home, I have two presents for him.

The gifts are a pair of hazel dormouse shelters. I bought them online as I could not find them elsewhere. Very sturdy structures indeed. Unlike birdboxes, the entry hole is at the rear.

Our friend will be able to create replicas as he’s handy that way and has plenty of wood at his disposal. On our last visit the three of us found the discarded shells of hazelnuts. I took some home and checking a reference work was happy to discover that the neat holes on the sides were without doubt the work of the endangered dormouse.

We drive into John-Joe’s domain and meet him as arranged outside an old barn. We quickly march uphill into his woodland to search for the sites of the spent hazelnut shells. He then fixes the shelters to hazel trunks about 5ft up where, in winter, they will catch the sun and hopefully keep the small mammals warm. A camera is also fitted so that we can share images of nocturnal activity around one of the shelters. One heck of an experiment.

After installation, the three of us take a tour around the copse. It is lovely in here all year round. Today, full of varied birdsong and the charming scent of the full compliment of greenery. The vast swathes of bluebells that we witnessed in spring are now laden with fruiting capsules. Dog’s mercury fills in like a green sea and a pheasant explodes into flight close to our feet, startled, from the undergrowth, “kor kocking” as he goes. Rosemary blushes as she points out a stinkhorn fungus, aptly named in Latin, Phallus impudicus. Oh well, nature’s mimicry knows no end but Rosemary has a point.

John-Joe thinks that he has spotted an owl, we miss it. Box and hazel bushes fill in the gaps between taller trees. Field maples, a few truly ancient and burred sum up the sheer magic of the place. Shards of sunlight pierce the canopy above. Rosemary spots a shaggy bracket fungus (Inonotus hispidus) on a decaying ash. Some trees display most weird shapes. Some of the cherry trees in the interior are massive, one or two grabbing the ground as if in desperation. If this isn’t heaven on earth then what is?

The old clay soil loving hornbeams and common limes, tolerant of most soil types are looking fine, the latter with the sun’s light shining through their pale green leaves. All is at peace. Bumblebees buzz about with nonchalance, simply great.

On the perimeter, across a field, we spot a serene-looking pair of white cows with black ears and noses.

We head back down a steep slope where we have left the car after looking at some of John-Joe’s coppicing work on hazels.

Opposite the barn our friend had sown a selection of wildflower seeds last year, and as a result we are privy, treated and presented with a glorious array. A buff-tailed bumblebee is fixated on some reddish-flowered hedge woundwort, borage (Borago officinalis) a naturalised garden escape looks healthy, glowing blue, chicory likewise. Great mullein and dark mullein look sharp, weld with its yellow-green flowers stands proud, perforate St John’s wort and green alkanet accompany the super display. It really is a sight.

Things just get better as we walk through a prickly patch beside the barn to ascend a nearby meadow on a steep slope.

It is a miracle and just as at Jon Hatt’s Coombe End Farm, there is a subtle but significant revolution going on here, I have to admit that I love it and so does my wife.

Where once sheep or horses roamed the hillside, it has been left alone, not browsed and looks splendid for it.

Once more we find ourselves in a field that nature is reclaiming, another lies beyond, what will we find there? We are very lucky to have been allowed on two stretches of private land. We’ve seen plenty of lovely views and special plants and heard some distinctive birdsong. It is time to go home. I’m not cooking tonight as it’s Rosemary’s turn. Phew!

As supper is prepared I sit outside watching all the birds in our garden, jackdaws, starlings, goldfinches, greenfinches and dunnocks. They are all fun in their own ways. I’m glad that we’ve got them. Bravo to them all.