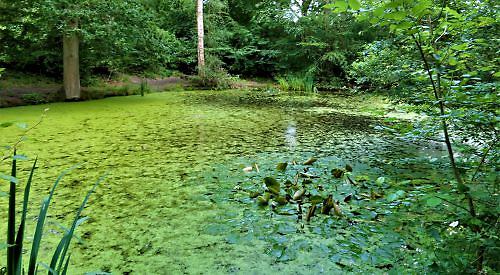 WE’RE going on an adventure today, something I’ve wanted to do for a long while, a desire expressed to Rosemary. We are going out for an evening and later, a night walk.

High-powered torches packed, one in what Rosemary refers to as my “handbag”. So charming.

We drive to Woodcote and park our car tight up by the ponds at Greenmoor Hill. It is a Chiltern high point some 187m or 613ft above sea level.

We have planned to meet John Sandford and his wife Sue at 8.30pm. We have recently got in contact with one another through this column.

Our wish is to spot a native bird, the woodcock (Scolopax rusticola), performing its evening “roding”, a normally repeated flight pattern above tree canopy. Here we anticipate this crepuscular activity across the woodland and open spaces of Birchen Copse, Common Wood, Bensgrove Wood and College Wood. Expectations are high.

John leads the Woodcote Woodcock Walk through the broad tree-lined rides. He is a committee member of the Woodcote Conservation Group (WCG), a fine outfit.

The last time that he led a walk he managed to enthuse half a dozen children. If more of us could do something similar then we could be leaving the future of our environment and our planet in good hands.

We arrive about five minutes early and explore a patch of wasteland close to a communications tower adjacent to the Black Lion pub. I have not visited the premises for many a year. This will have to be rectified.

I’m surprised at what we see growing on, around and inside a makeshift fence that protects an old facility owned by Thames Water that appears to be planned for development. However, according to the WCG, “working parties and pupils from Langtree School have now cleared part of the site of invasive willow trees to create an open area for wild plants and grasses to grow”, so why the rickety, metal fence?

Members of the pea family, I have not seen either species for a long while and in such numbers. I first came upon the plants in an old railway siding east of Swindon Railway Station through work. In the case of the ribbed, last summer in a field near Hardwick just off the road to Whitchurch.

We meet John and Sue, and after brief introductions our quest to see these endangered birds begins. They are on the International Union for Conservation of Nature “red list”, which means that the
species is threatened and in
worrying decline.

The woodcock inhabits damp woodlands with clear, open areas. Short-legged, the bird’s plumage mimics leaf-litter so in daytime they are hard to spot. They have large dark eyes and an elongated bill. They eat at night.

The four of us take a bridleway that runs south-eastwards alongside the ponds. The waters are quite extensive, the nearer is partially covered with duckweed but very pleasant to look upon in a woodland setting.

The perimeter is home to much tutsan (Hypericum androsaemum), a very pleasing sight, the interior of the pond is dominated by rare greater spearwort (Ranunculas lingua), the five-petalled yellow flowers are a delight. It could be a true native or planted. I don’t care as it is simply lovely.

We progress past some attractive, tucked-away houses and meet the start and northern side of Birchen Copse. The bridleway is quite muddy and full of sticks but with a gravelly run that for the most part snakes through the middle revealing shiny pebbles. This is where we walk.

I’m more than disturbed to see “keep out” signs but more of that later. Our path is waymarked, with white arrows on the trunks of beech trees. They will become very useful later.

To the north a finger-like projection of College or Abbot’s Wood stretches out westwards.

Moving forwards towards Common Wood, John and I engage in conversation about foreign languages. He is fluent in German and also Spanish. Me, Spanish, Portuguese and French with a smattering of Polish and Russian. I mention that I’ll soon be getting serious about Norwegian as my wife’s father came from Oslo, formerly named Kristiania. I believe that it is easier to learn another foreign language once you have mastered at least two.

Rosemary and Sue chatter away in front as we make our way forward to the wide-open ride leading to Deadman’s Lane that Rosemary and I had visited earlier in the year.

As last time it is full of great big, black slugs (Arion ater) making their way underfoot. We step round them balletically. Vervain, common mallow and perforate St John’s wort are all in flower as is wild privet.

After passing another pond to our right we scan above the treetops for a sight of a woodcock and then it happens. At first, we hear a repeated grunting “rorrk-rorrk” followed by an odd sounding “tsiwik”. I miss the first few sightings but then I see one flying high above, moving swiftly with slow wing beats, the bill slightly drooping.

They are quite chunky birds, too, with rather deep wings. I’m thrilled, as is Rosemary. She tries to capture a photo or two but they are high up and fast. Well, does it matter, we’ve seen and heard them. We’ll remember their sounds and flight pattern forever and come back next year and earlier.

We move on down the wide ride and hear and see another. Is it the same one? I’d hope that there was more than just one patrolling the skies above and showing off.

It is starting to get dark. We turn around, and spot what I deduce to be the same woodcock above the tree canopy and dive through a dark, narrow path where we all have to duck under the branches of hazels and other small trees to gain another ride that we all know well. This is fun.

A woodcock pings past and then again with its trademark utterances. All goes quiet for about thirty seconds and then we hear another bird that seems to be a youngster calling out for food. Rosemary reminds me that we’ve heard this before. It is a young great spotted woodpecker, she’s correct.

All falls silent as the sun finally dips out of sight. We turn our torches on and make our way back.

At one point we all get a little lost and have to backtrack but John eventually finds our intended path. As I get seriously disorientated, John and Sue advise me to shine my beam on the tree trunks that fortuitously have very clear white arrows sprayed on to them. I expect the hoot of a tawny owl but it does not materialise.

Onwards we go, now and then me nearly slipping in the muddy sections of the path and getting grazed by holly leaves, thank heavens for my torch and Rosemary.

We come across Birchen Copse once again. A company named Woods4Sale has, as I quote, from the WCG website, “sold off” lots. It adds: “Many local people have expressed their dismay at this development, where previously open woodland has been divided up and, in some cases, fenced off.

“This has been accompanied by the installation of surfaced tracks, sheds and notices, all of which has created an alien and hostile atmosphere in this part of the Chiltern woods on Woodcote’s doorstep.

“Objecting to what is happening in Birchen Copse is essential if we are to protect our wider local landscape from yet more inappropriate incursions.”

This is dreadful and similar to other parcels of woodland that have been sold near Stoke Row. They belong to an Area of Outstanding Natural Beauty and by law cannot be interfered with in any shape or form.

According to the National Association, an Area of Outstanding Natural Beauty “is a
designated exceptional landscape whose distinctive character and natural beauty are precious enough to be safeguarded in the national interest. They are protected and enhanced for nature, people, business and culture.”

England, Wales and Northern Ireland has 46 Areas of Outstanding Natural Beauty, covering 18 per cent of the countryside, more than a fifth of the English coast, and including 12,000 miles of footpaths and bridleways.

The charity has three objectives: to promote the conservation and enhancement of natural beauty in and around an Area of Oustanding Natural Beauty, to advance the education, understanding and appreciation of the conservation and enhancement of the countryside and to
promote the efficiency and effectiveness of organisations promoting or representing it.

There you go then, in my view, activity in Birchen Copse is fundamentally wrong and a disgrace.

We part company with John and Sue. We agree to meet up again soon. As we drive past the Black Lion it is near closing time. It does look inviting.

When we get home the two of us sit outside to ponder on an evening well spent over a bottle of fine white wine before turning in after a four-and-a-half-mile walk.

It has been well worth it, without a shadow of a doubt.