Patchwork of woodland, meadows and pastures is gift from nature 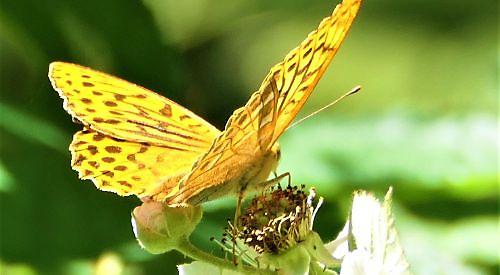 AFTER shelling out 60p, we drive across the river at Whitchurch toll bridge and onwards to Pangbourne.

When we get there, much of its centre has been cordoned off with temporary traffic lights. There is no sign of any work going on and, as usual, traffic cones are everywhere. Total chaos.

After the perplexing delay we join the A340 and drive towards Tidmarsh. This is not my territory. Maybe it is something primitive in me as I only feel at home in a rough triangle between Wallingford, Turville, Henley and Caversham. Perhaps that’s why Rosemary calls me a savage.

We are heading towards Moor Copse, which is owned by the Berkshire, Buckinghamshire and Oxfordshire Wildlife Trust, and is also part of a Site of Special Scientific Interest. Neither of us has ever set foot in this nature reserve before but I’ve hankered for some time to pay it a visit.

After passing through Tidmarsh we miss the entrance to the car park, fly over the M4 and end up in Englefield where we turn around to head back. We spot the inconspicuous turn and find the small, semi-disguised car park with relief. It is early in the day but there are already other cars there.

According to our copy of the trust’s Wild Guide, it is a place of “great character” with large swathes of tranquil woodland surround and a patchwork of meadows and pastures. The setting is thought to have inspired EH Shepard to illustrate The Wind in the Willows by Kenneth Grahame. How accurate this turns out to be.

We head down a small dip and meet the River Pang, a rare chalk stream. It is stupendous. The water is fast-flowing and clear. A brown trout rises to capture an insect on the river’s surface. It might have been a river pond skater (Aquarius najas). A ripple is left behind. Banded demoiselles (Calopteryx spendens) whose males exhibit near ultramarine “bands” on the wings and beautiful demoiselles (Calopteryx virgo) are present. The males of the latter species have dark black-brown wings, those of the females a sort of russet colour, both with showy metallic blue-green iridescent bodies. Both species are abundant and in their element. Such a lovely sight. I’m quite simply wowed by the river, it smells sweet.

Under the water an aquatic grass sways and a banded demoiselle flies above, reflected on the surface, just shy of the trout’s ability to leap, seize and consume.

The riverbanks are full of fragrant, creamy-white sprays of meadowsweet (Filipendula ulmaria), one attended by a honeybee (Apis mellifera), the pinkish heads of hemp agrimony (Eupatorium cannabinum) in near flush, purply-flowered great willowherb (Epilobium hirsutum), pendulous sedge (Carex pendula) stirred in the slight breeze and the purple florets of spear thistle (Cirsium vulgare).

Rosemary captures some images of a large silver-washed fritillary (Argynnis paphia) with its glorious golden wings with prominent dark markings. A true beauty as it momentarily alights on a bramble near the riverbank. This place is a marvel.

A fallen bough gives us the “V” sign but we don’t have a care in the world .

Our path along the river is a bit topsy-turvy and quite bumpy. To either side, common alder (Alnus glutinosa), pedunculate or English oak (Quercus robur) and a large contingent of willow species sprawl on either bank. Osier (Salix viminalis), crack-willow (Salix fragilis), goat willow (Salix caprea), white willow (Salix alba) and grey willow (Salix cinereal) are most impressive.

Way below, humble common dandelions (Taraxacum officinale) and selfheal (Prunella vulgaris) flourish. We are on the lookout for a kingfisher (Alcedo atthis) as this is perfect hunting ground or, more specifically, water for the species. They’ll be about but out of sight.

The huge variety of insects is astounding and we are not at all surprised to hear varied birdsong from within the sylvan depths. Chiffchaffs, chaffinches, robins, whitethroats, blackcaps and wrens. This is quite an extraordinary place. I should really have visited years ago. It will now be a permanent fixture in our calendar throughout the turning seasons. On what we assume to be an impressive anthlll we spot a hoverfly (Ferdinandea cuprea), seemingly sunbathing.

We encounter a wooden bridge that spans the Pang. It is rather lovely, broad and well-built. We stand in the middle to take it all in. The delightful water forget-me-not (Myosotis scorpiodes) with its sky-blue, yellow-eyed flowers sprawls on one of the banks. A female emerald damselfly (Lestes sponsa) settles on a leaf, a beautiful male demoiselle does the same. We feel like we have entered the Garden of Eden. Rosemary calls me “sugarpuff”, I, in turn, call her “Muttley” down to her shoulder shaking as she laughs. I remind her that I am not Dick Dastardly!

Creeping thistles (Cirsium arvense) seem to be popular with small black pot beetles (Cryptocephalus labiatus), the poisonous berries of bittersweet or woody nightshade (Solanum dulcamara), dangling with intent like mini, unsavoury apples above much hedge woundwort (Stachys sylvatica) in the last throes of flowering and, as ever, popular with bees.

We come to the end of the ride to meet a substantial gate, pass through and enter an open meadow. We are both taken aback by what we see.

I go quiet, Rosemary throws me a glance and looks back on the panorama. Neither of us has ever seen anything like this before, a sheer wonder.

We are confronted with a sea of grasses, red fescue (Festuca rubra) in swathes. Wildflowers that are host to an enormous population of insects. The meadow grasshoppers (Psuedochorthippus parallelus) alone drown out the noise of the M4 motorway — some feat!

There are so many vascular plants on show, such as Lady’s bedstraw (Galium verum) with its intense yellow, clustered, delicate, four-petalled flowers with the scent of hay, greater knapweed (Centaurea scabiosa) with purple, elongated disc florets, common knapweed (Centaurea nigra), creeping thistle (Cirsium arvense) with its dusky, pinky-hued flowers, yarrow (Achillea millefolium), a virginal, bright white without a hint of pink and oxeye daisies (Leucanthemum vulgare) as bright as a button.

Meadow brown (Maniola jurtina) and ringlet (Aphantopus hyperantus) butterflies are having a party. No need for a nightclub, they’ll leave that to their nocturnal moth friends.

We enter another patch of woodland. The switch from bright light to dark is remarkable. Various specialist grasses that have evolved for shady conditions flourish. We are greeted by a spread of foxgloves, some still in flower. Woodbines, or honeysuckles (Lonicera periclemenum), seem to wave with a degree of cheek (or is it delight) around the trunks of oaks and hazels. Good for them.

We move through a short passage to another patch of woodland and to either side we are assailed by the bright, one-sided, purple flowers of tufted vetch, resplendent. In all honesty, it is a gift of nature to see such a flower.

We meet a couple with a large dog, determined to take a dip in the cool water. We hear an enormous splosh and then another. Superb, we love it.

We then drive homewards and, after being relieved of another 60p, we stop at the Sun pub at Hill Bottom. We’ve just made it in time for something to eat.

I ponder on one of my favourite songs by The Kinks. It is called Days. I’ll re-phrase it in a fashion dedicated to Rosemary that I’d longed for all my life.

Thank you for the days,

Those endless days, those sacred days you give me.

I’m thinking of the days,

I won’t forget a single day, believe me.

I bless the light,

I bless the light that lights on you believe me.

Roll on bright skies, night and day. I’ll get my telescope out and, as the saying goes, carpe diem.