You’d don’t need PhD to appreciate nature but some could use brain... 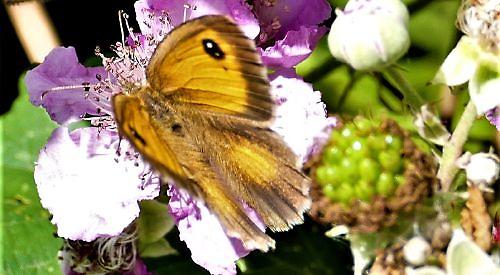 WE drive to Mapledurham, which is only a few miles from home in Caversham but we have not been for some time.

The neat, small village has an eerie feel to it and visiting is like stepping into the past.

Driving down the twisty, tortuous lane from Trench Green is difficult but I have faith in Rosemary’s ability.

We pass the old, white-painted school house with its high, elegant chimney stack, pretty to this day, and dip down past Step Cottage that featured prominently in the The Eagle Has Landed (1976).

I still miss the decidedly handsome avenue of elm trees that formed a green tunnel that led all the way down towards the floodplain.

After arriving safely, we park to the side of the church, which is dedicated to St Margaret and is next to the Elizabethan manor house.

This ancient village has many glorious buildings — the last working mill on the River Thames, almshouses, villas, cottages, a rectory and a defunct post office. All it needs is a pub. There was one once but it is now a house. Same old story.

Walking towards the White House, we turn left into an old lane that heads to Hardwick House in Whitchurch and beyond.

A robin perches on an old wall like a sentinel but lets us pass and breaks into song.

Below and through the hedgerows, flowers are in full bloom and there are lots of brambles (Rubus fruticosus agg) with pink and white flowers.

To our left towards the River Thames, a field has been left fallow so it is positively blooming and looks great.

To the side of the track, prickly sow-thistle (Sonchus asper) shines with yellow florets.

Traveller’s joy, or old man’s beard (Clematis vitalba), clambers through blackthorn and roves up and down a high bank to our right, its flowers milky-white with stand-out stamens.

A small, somewhat indistinct fly settles fleetingly on the leaf of a bramble. It could be a stable fly (Stomoxys calcitrans) but I’m not an expert on diptera.

A shasta daisy (leucanthemum super-bum), a garden escapee and a relative of the oxeye daisy, shows its mettle.

Forty or more crows in the sky above an arable field to our right sound off noisily.

Agrimony (Agrimonia eupatoria), with its five yellow petals, looks splendid and there are adorable clumps of scentless mayweed (Tripleurospermum inodorum).

It is very pleasing to encounter a wide variety of trees and shrubs along the way.

Spindle offers what will later ripen into four-lobed, pink and orange fruits, while blackthorn is already bearing its own purplish fruit used for making sloe gin.

Hazels are turning nutty already — just like me, according to Rosemary.

Sadly, heavy rain begins to fall so we retreat some halfway from my intended target and agree to return the next day when it should be somewhat brighter and so it turns out to be.

Just 24 hours later certain things have changed. First and foremost, it is a much clearer day.

We move further on down the rugged, stony lane. I stand to admire a giant, locally rare, cotton thistle (Onopordum acanthium) that towers above me.

A small scabious (Scabiosa columbaria) with its long, deep taproot peeks out of the path side.

A break in the hedgerow to our left, across a field of maize, reveals a view of Boze Down and The Wilderness, the site of an ancient hill fort. The verges have been nominally cut back in places, which I can only presume is for the protection of cyclists and horse-riders from the brambles that arc over the trail.

The bridleway is also described as a “recreational route” on my Ordnance Survey map. I would not feel comfortable meeting a horse here as our way is very constricted. Indeed, it is difficult enough today with the amount of two-wheeled traffic.

I feel sorry for the people that whizz past as they are unable to take anything in. Oh well, their choice.

Along our way wild marjoram (Origanum vulgare), with its highly aromatic leaves and pinkish flowers, flourishes. We take it for granted hereabouts but it is only locally common in the south on calcareous soils.

A honeybee takes its fill on a white-flowered bramble, a wood pigeon rests in a blackthorn and a comma butterfly alights on a flower, such a beautiful insect. When they close their wings, they look no more than a dead leaf — a great disguise. How clever is nature?

Badger paths run up and down either side. These are historic, inherited and seemingly permanent. In urban environments some folk try in vain to block them off but, as Rosemary says from experience, “you can’t stop a badger”.

To our left, towards the river, a bonfire rages and a tractor ghosts past. Some kind of work is also being undertaken on the far bank. It is unclear what for and why.

On the now steep right bank we come upon a large spread of cat-mint (Nepeta cataria). It is scarce in Oxfordshire but plentiful here.

Rosemary suggests that it has been deliberately planted by a cat. She has an extraordinary imagination. As we approach East Lodge on the Hardwick Estate, we turn right and up through a gate into steep Westfordhill. A copse of the same name lies high above.

Some of the grassland is turning to scrub with many young hawthorns but it is full of flowers nevertheless.

Wild marjoram proliferates, as does a large amount of vervain and common ragwort (Senecio jacobaea), with its bright yellow flowers. It is much denigrated but is the food-plant of the caterpillars of the beautiful, black and red cinnabar moth (Tyria jacobaeae).

Field scabious (Knautia arvensis) with its hairy stems is swarmed by white-tailed bumblebees (Bombus lucorum) and yellow-flowered hawkweeds (Hieracium agg) fill in the complex combination of colours on display.

With hawkweeds you almost need a PhD to distinguish one from another as they are so variable. They are evolving into separate species that will hybridise in the way that wild British orchids do. It raises the question: how do you define a species?

Three female pheasants run up the hillside only yards away. Strange creatures.

My favourite plant at this time of year is in plenitude, the stunning clustered bellflower (Campanula glomerata), a chalk lover that is only locally common in South and East England.

The flowers are bell-shaped and a lovely blue-violet colour. I’m pleased to introduce Rosemary to them and she is impressed by their elegance.

The pyramidal orchids that are common here have now retreated after their brief flowering. They will be back next year.

Back home, I pop out for some provisions and notice that the roadside verges at the bottom of All Hallows Road in Caversham have been hacked down, presumably by Reading Borough Council.

The common poppy, yarrow, various hawkweeds, meadow buttercups, daisies, weld, dove’s-foot crane’s-bill and a multitude of other flowers are no more, robbing vital pollinating insects of food. What an unnecessary tragedy.

If the verges needed cutting at all, it could have been performed at the end of the month or preferably in September.

Many of these attractive flowers could have set seed for next year. Anyway, what is the point of being “tidy”? I despair.

I have just received a new book by Dave Goulson, professor of Biology at the University of Sussex, which I’m looking forward to reading.

It is called Silent Earth, Averting the Insect Apocalypse, which echoes Silent Spring by Rachel Carson, an American marine biologist, whose influential book was first published in 1962.

According to the back page of her revolutionary book, it “exposed the destruction of wildlife through the widespread use of pesticides. Despite condemnation in the press and attempts by the chemical industry to ban the book, Rachel Carson succeeded in creating a new public awareness of the environment which led to changes in government policy and inspired the modern ecological movement”.

Bless her for her prescient work.

She dedicates her book to the theologian Albert Schweitzer, who once said: “Man has lost the capacity to foresee and to forestall. He will end by destroying the earth.”