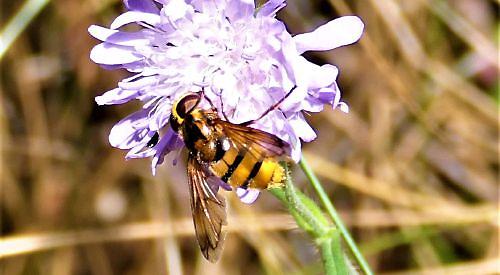 IT’S just after 7am so I get up. Rosemary is ahead of me after being hassled by our perpetually hungry cat Cilla, as usual.

She is, as Rosemary describes her, a menace but we love her.

Cilla fed and content, we scan our Ordnance Survey map and agree to visit Dog Lane, which is near Peppard Common.

There is a good reason for this as we will be able to have lunch in one of our favourite pubs midway through our stroll.

Rosemary parks outside the Red Lion pub and after a quick scan of the attractive common, we cross the B481 with caution to the entrance to the lane.

On our last visit in early April it was extremely muddy; today it is dry and stony, with only a few dampish patches. The sometimes fine, gravelly path indicates the seasonal passage of water on this August day.

On our first visit I promised Rosemary that we’d now be walking through a verdant, green tunnel and so we are.

Almost immediately we come across a large amount of stinking iris, some bearing reddening berries.

Blackthorn bushes bear purple coloured, downy sloes that resemble tiny plums. I wonder how old the lane is as the banks are rather steep (a Holloway) and full of ancient woodland indicators such as dog’s mercury, enchanter’s-nightshade and plenty of ferns. I guess that it is an old droving route.

Badger tracks run up and down either side and rabbit warrens are obvious with all the sandy excavations.

Various flowering plants garnish the sides of this old way. We come across a lovely tansy (Tanacetum vulgare) with its distinctive aroma, button-like, yellow disc florets and pinnately divided lobed leaves. It is popular with flies.

On a small scabious (Scabiosa columbaria) we spy Britain’s largest type of hoverfly, Volucella zonaria, frequently referred to as a hornet mimic.

A recent colonist from continental Europe, it was first recorded on the south coast in the late Thirties.

A female speckled wood butterfly rests on a hawthorn in bright sunlight. A male small white basks on another small scabious.

Honeysuckle, or woodbine, now bears clusters of exquisitely red berries. Elderberries are maturing. I’m tempted to return and gather some of the huge crop to make a potent wine.

Apart from two cyclists who bid us “good morning” and a lone walker who says “hello”, we have the lane to ourselves. It is very quiet and peaceful.

Now and again a wren rattles off, wood pigeons “coo”, a female sparrowhawk zooms past in earnest and a large contingent of long-tailed tits “see, see, see” as they move through the foliage.

The remnants of spring’s bluebells are spreading seeds, almost rattling in the gentlest of breezes.

We spot more speckled wood butterflies, male and female. They do like the sun. The males defend their territory with purpose.

According to my edition of Britain’s Butterflies (Newland, Still, Swash and Tomlinson), “This is the only British butterfly to hibernate both as a caterpillar and as a chrysalis.”

Their food plants are varied but they seem to prefer cock’s-foot, Yorkshire-fog and false brome grasses.

We stop to admire the mystery fern that I described in spring. It has grown but I’m still not sure what species or hybrid it may be. There is something uncommon about this individual plant.

I sent a photo to a botanist friend who shared it with others and they are unsure too. I don’t like anomalies.

The narrow lane opens up and we are flooded with sunlight. Two oak trees are wrapped around each other like lovers.

After a short distance, we meet a crossroads — an intersection between the Chiltern Way north to south, King’s Farm Lane below and to our east another that leads to Silgrove Wood and Packam Plantation towards Henley.

We turn north along another charming thoroughfare that leads to Greys Green Farm and more.

The first time that I walked here 30 years ago with my cousin Mark Waterman we were startled to witness common shrews (Sorex araneus) with their ever-quivering snouts playing a form of kiss-chase around and up and down the lower trunks of field maples. A very entertaining sight it was too, these tiny mammals squeaking away.

Sadly, there are none today because it’s too late in the year to witness such behaviour.

Whitened dead oak trees with no bark stand in front of a green backdrop, which is rather haunting.

Soon we turn right on to a gated path and head towards Rotherfield Greys and encounter many young oak trees. It will be interesting to see how this develops in years to come.

We walk past the churchyard of St Nicholas, noting some tiny white-flowered cyclamen over a brick-and-flint wall before entering the Maltsters Arms.

We both have “catch of the day”, monkfish from a Cornish supplier that comes with a zingy sauce. We both enjoy our food, pay the bill and then walk back to our car some one-and-a-half miles away.

It’s always interesting to take a reverse walk as very often you will find something that you missed on the way. This is such an occasion.

To either side is a relatively new golf course. Recently planted trees are growing with determination, which is lovely to see.

After a while we take an alternative permissive route that runs alongside the official path and is three or four feet higher.

A butterfly settles on some parched earth. It looks familiar but I cannot name it. Rosemary takes a picture of it and later I check my books but still can’t identify it.

Ivy, another denigrated plant, clambers all around. It is so important to the survival of a myriad of insects that sustain the chain of life.

Our walk back to the common is surprisingly rugged and steep.

As we progress, I look down on the rounded, polished pebbles of quartz underfoot and understand that they were shaped in this way over millennia in ancient rivers. We only live so long but geography tells its own tale.

No matter what the time of year or the season, rain or shine, we love to get out. There will always be something of interest, rare or common, as long as it is all there. We hope for the future and all it holds for generations of fellow ecologically minded folk.