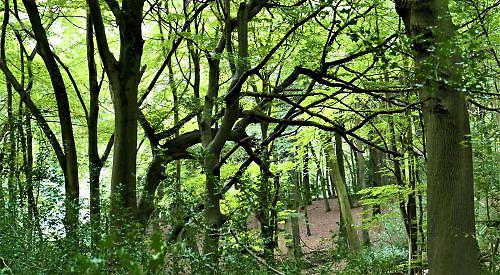 AT 10.20am on the last day of August, we arrive at Nippers Grove, near Wyfold, just north of the ominous sounding Gallowstree Common.

We are meeting up with other members of the Fungus Survey of Oxfordshire.

On this morning we are guided by my friend and the FSO president Professor Richard Fortey, from Henley. Our mycological recorder is Julia Huggins.

As we meet up, most of our nine-strong party seem unaware of the majestic large-leaved limes (Tilia platyphllos), which are important and nationally rare.

Neither, I assume, do they know about the violet helleborines (Epipactis purpurata) — the roadsides here have been a stronghold for this attractive orchid species for many years.

This is not a criticism of our companions who, after all, have come for a fungal adventure.

The ground is quite dry so we are not over-confident of finding many species. However, things turn out very differently.

We step over the wooden, anti-motorbike constructs into a west-facing bridleway.

Linda Seward, one of our party and a familiar name to Henley Standard readers, proffers a short portion of a fallen branch to Richard.

It is covered with what he calls King Alfred’s cakes. I use the alternative name of cramp balls (Daldinia concentrica). The fungus grows on the dead wood of deciduous trees, almost exclusively ash. When dry, it makes an excellent fire-starter so a valuable asset if you are wild camping.

As we move on, a field of wheat or barley (we’re not close enough for me to be sure) to our left is being harvested by a noisy combine, dust flying.

The woodland we enter is dark and strewn with branches. There are larches, Douglas firs and oak and beech trees.

My comrades step over fallen trunks and branches while a dodgy left knee (a split meniscus) precludes my involvement. Rosemary joins in with the inspection of the earth and trees. After a long while of studying various finds, Rosemary and I break off and walk on ahead as we want to take in the large landscape and full scope of trees.

The almond willow (Salix triandra), always small, is an unexpected find but great to behold. It likes damp conditions.

Apart from the chatter behind us and the noise of farm machinery in the distance, all is supremely quiet.

Underneath the trees and on the margins, we find an interesting spread of lady ferns (Athyrium filix-femina), enchanter’s-nightshade, agrimony, woodruff, selfheal, perforate St John’s-wort and pale willowherb.

There are also foxgloves still in flower, which is surprising for this time of year.

We encounter a single, naturalised montbretia (Crocosmia x crocosmiiflora) with its orange flowers. It looks happy and we are pleased, if surprised, to see this garden hybrid.

We are now getting hungry so we leave our group with grace and head back to our car and drive north through Busgrove Lane and Stoke Row and head off towards Scots Common and our destination, the Black Horse.

As we arrive through a very narrow lane, Rosemary spots a colourful bracket fungus on a cherry tree.

She parks and we walk back to take a look. It is called chicken of the woods (Laetiporus sulphureus). It was once a striking yellow and is now tangerine hued.

I fail to report it, which is stupid of me, not because it is uncommon but because it’s a real beauty.

In the pub, where we order pints of beer and bacon sarnies (what a treat), they all know about it.

We sit outside. Once again it is silent with no air traffic and not even birdsong but then it is the moulting season. Due to their temporary feather loss, the birds are trying to keep out of sight of predators.

Horses graze, with tails swishing, on green pasture across the lane. Nothing could be lovelier.

Five elderly male cyclists on smart expensive machines arrive at the pub. They cannot find the entrance so Rosemary indicates. This is not the first time that this has happened.

After our pleasant sojourn, we decide to retrace our route along the back roads.

We stop off for half an hour and enter Basset Wood and Ipsden Wood, which we have often wanted to explore as they look so inviting (the latter is “open access”). Dominated by gloriously shaped beech trees, the woods also have the occasional oak and silver birch. It is quiet here too.

An enormous dip seems to indicate previous glacial activity, although I can’t be sure — only the earth knows. It was suggested to us in the pub earlier that the cause may have been clay being extracted for the old brick kilns in Nettlebed. Who knows but to my eye it looks like nature’s work.

As we approach Nippers Grove once more, we spot half of our company milling around, about to leave.

Richard informs us that the group found six russula species, commonly known as milkcaps. A successful enterprise then.

Here is the list of the other fungi they found (apart from two that still have to be confirmed by Richard). I include the Latin names for readers who may be interested.

In addition, slime moulds were seen on rotten conifer wood. There was also false puffball (Reticularia lycoperdon), a red Nectria sp and a black (Anaurochaete atra). What a lot!

We are both looking forward to our next venture with these enthusiasts at Harcourt Arboretum at Nuneham Courtenay, once again led by Richard.

I’m determined to increase my knowledge of fungi but also of mosses, liverworts and ferns in order to gain a fuller understanding of all aspects of nature.

Driving home, wood pigeons seem to have become kamikazes in the centre of our local roads. Crazy birds.

Back home, we spot a German wasp (Vespula germanica) on the terrace walking about as if confused.

I feel somewhat sorry for it. These little workers are valuable as they destroy aphids. I don’t mind them, even though I have been stung twice.

Finally, I’d like to thank everybody who contacted me via email to identify the butterfly that I was unable to name last week, in particular Robin Morrell, Chris Griffiths, Chris and Tina Brown and Susan Byers.

I wrongly thought that it was one of the browns but it was a small copper (Lycaena phlaeas). I feel like a fool but then no one is perfect — unlike nature.