Riverside plants seem to extend their flowering season every year 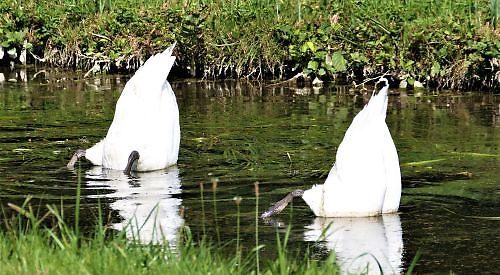 AFTER leaving home in Caversham, we head towards Henley on the A4155. We love the sign that welcomes us into Oxfordshire.

As we pass through Shiplake, it looks like the village’s identity will soon be lost to become a pricey suburb of Henley. Such a shame with trees felled, land flattened and levelled and roads widened.

After passing the roundabout that leads to the Tesco store, we turn right down Mill Lane and Rosemary somehow finds a parking space in the small car park, which is unusually crowded today.

Our intention is to walk around Marsh and Mill Meadows, which we have not visited since July 29, 2020, when we were given a guided tour on how it was being restored to a natural state (how it would have appeared centuries ago) by Sally Rankin, of the Greener Henley Wildlife Group.

It is now early September so we don’t expect to see what we witnessed last summer but rather how the meadows have developed since then.

Entering the meadows, we come across the dried seed heads of wild teasel (Dipsacus fullonum), such a handsome plant.

It’s a bit of a show-off in full flower with its pink, egg-shaped heads. The fruits are particularly loved by goldfinches.

Nearby, creeping thistle (Cirsium arvense) is still in flower. I have observed with every year’s passing that many more plants’ flowering periods seem to be extending. As an example, meadowsweet (Filipendula ulmaria), with its frothy, creamy-white, scented flowers, seems to have only just got going.

Great willowherb, more than 6ft tall, is burgeoning with its pinky-purple, delightful flowers.

Common comfrey (Symphytum officinale), with pink and sometimes white flowers, should have finished blooming in June. Not here.

Over by the riverbank people walk their dogs, seemingly oblivious to the glorious land that surrounds us.

I love the scent of poplars, which takes me back to my time in Moscow, which was full of Populus nigra, the black poplar.

Young pin oaks (Quercus palustris), a native of north-east America, are in the perfect surroundings for the species. The leaves turn a dramatic red in late autumn.

We also come across some sweet chestnut saplings (Castanea sativa) that seem to have settled in nicely.

Compact rush (Juncus conglomeratus) forms large clumps in the damp earth, a good sign of the health of the meadows.

Handy swathes have been mown through the meadows to form narrow but not intrusive, meandering pathways through the vegetation. This is how it should be, all inclusive, welcoming and informative. I’d have loved this as a child.

In the lush surroundings near Cold Bath Strean we find mare’s-tail (Hippuris vulgaris) at one of the small ponds.

An uncommon plant in Oxfordshire, it is an aquatic. The upright stems display fine, whorled leaves that stand proud of the clear water.

It’s another nice touch that shows how this precious area is being restored to its natural and original beauty.

We head for the river and walk towards Marsh Lock, one of our beloved places.

As always, the river smells sweet and both the wooded hills to the east and the meadows to the west are inviting. We love it here; there is nowhere that compares.

We walk along the wooden construct and after passing the lock-keeper’s cottage, stop at a place that means so much to both of us.

Mute swans greet us and Rosemary treats them with artisan treats. I think they recognise her.

Returning to the car park, we agree that we were impressed with what we saw in the meadows, so congratulations to Sally et al.

The next morning, we decide to get out early as it is going to be unseasonally hot and head out to a part of the world that we have not explored for some time.

We assume that they were planted in the late 1700s on the instruction of Lancelot “Capability” Brown when he was landscaping the grounds of Fawley Court.

Stepping through a metal gate by Phyllis Court Club, the grass is very short. A hawthorn is full of ripening berries. On the opposite bank marquees are being dismantled.

Walking along the riverbank, we take in the spectacular views up and downstream. Hoary plantain grows on the edge of the bank.

Continuing north, we pass over a little tributary. A moorhen scuttles off through the vegetation making strange noises.

Rosemary spots some interesting flowering plants. One is marsh ragwort (senecio aquaticus), the other is marsh woundwort (Stachys palustris), both first recorded in Oxfordshire in 1794. They are joined by the now familiar orange balsam.

Moving on, the bank is scattered with handsome trees, mainly alders, with a lone sycamore and a lovely white willow.

To our left at the front of mixed woodland, three broad stumps stand like chalky-coloured guards, denuded of bark. They were felled about 10ft up. We don’t know why — were they used as markers?

Several boats are moored up. The last is being given a scrub. A large, black dog with a curly coat lolls about in the sun.

Meadow brown butterflies dance in the air. A group of graceful mute swans glide about on the river’s calm surface. Suddenly, another swan flies in and lands aggressively so they disperse. I guess it is something to do with territory.

Standing on a raised wooden walkway, I stare into the water below but see no fish. We go through a small tunnel and emerge to find felt galls on the underside of sycamore leaves.

These are caused by a gall mite (Aceria psuedopltanai). The black spots on the upperside of the leaves are caused by tar spot fungus.

We arrive at a new crossing by Fawley Court. Two swans in the stretch of water that leads to the house look comedic, tails up, heads in the water.

It is too hot for Rosemary so we turn back but will revisit soon.

On the way home, we stop off for a light lunch at the Maltsters Arms in Rotherfield Greys (again).

Back home, Rosemary rescues a now locally common (in our garden at least) hoverfly, a female Volucella zonaria, from our utility room.

We sit down in our back garden on a wooden bench. A speckled wood butterfly poses on a pot plant. A lime hawk-moth appears to be taking a rest on a table cloth. A carrion crow sits aloft a neighbour’s tree and a grey squirrel settles close by.

A flying ant seems confused but urgent, twisting and turning on our outdoor wooden table. Suddenly, a red-fanged spider shoots out from underneath a terracotta pot base, seizes and paralyses the ant and proceeds to drag it away for consumption.

Such hunting skill, efficiency and derring-do. It all happened so quickly. I’m not sure of the spider’s genus or species. A book that I’ve ordered should help me out.