Wonderful old woodland with some strange-looking trees of all varieties 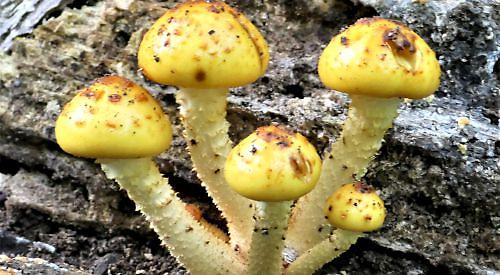 AFTER a good 10 months’ absence, we find ourselves back in Harpsden Wood, just over a mile south of Henley.

Owned by the Woodland Trust, it was acquired in 1991 with significant local contributions. In 1995 the adjacent Peveril Wood was added to the landholding. In total, the woodland runs to more than 46 acres.

Woodlands Road snakes through the middle. There are some steep chalk slopes to the north of the woods that skirt Henley Golf Club.

It is special woodland, which has existed since at least 1600 AD, with a timeless, peaceful feel to it. Part of a wider Site of Special Scientific Interest, it contains various soil types and a wealth of flowering plants, trees, fungi, birds and other animals.

Although dominated by beech trees, it is home to a broad variety that includes pedunculate or English oak, sessile oak, silver and downy birch, wild cherry, rowan, hawthorn, holly, goat willow or sallow, ash, wayfaring tree, yew and field maple. Quite a tally.

At this time of year, these plants have long finished flowering but we’ll be back next summer to see if we can find some or most of them.

On arrival, I stop to make an initial scan of our surroundings, while Rosemary scampers off through some low brambles as she has spotted a cluster of brightly coloured fungi on a large, rotting beech log.

The species is the golden scalycap (Pholiota aurivella), which is widespread across the South of England and very attractive too.

It is an alluring, smallish fungus with golden-hued greasy caps, covered in rusty scales. The long, cylindrical stipes (stalks) are creamy-coloured and also scaled, slightly bent, and look somewhat fluffy.

Dead, rotting boughs and fallen trees are strewn across the woodland floor, which is one of the reasons for the large variety of fungi to be found here.

It takes a long time for the wood of an oak, for instance, to break down fully, its nutrients gradually returning to the soil. This would not happen without the vital activity of fungi and invertebrates such as the stag beetle. Harpsden Wood is quite open with a maze of inviting paths, some broad and straight, others narrow, often winding through high bracken.

Although some of the trees may have been planted long ago, the wood is anything but even-aged and is regenerating beautifully. We stop to wonder at some of the most extraordinary shapes and forms.

The bole of a beech tree indicates that it is in real trouble, all warty, rotting from one side and grotesquely malformed.

Another one has an even stranger appearance. It is big, broad and tall with an extraordinarily knobbly bole and spreading roots with prominent, bulbous swellings, like something out of folklore.

Two young cherries appear to be oddly conjoined and other trees are multi-trunked, especially beech, some bent like bows.

Some of the wild cherry trees and silver birches are truly huge for their species, the former’s bark plated and glistening in the filtered sunlight, the latter’s bark deeply fissured and flaking to form black diamond shapes.

As we turn towards the sun, its rays burn through the still-green beech leaves above, such a reassuring sight.

An English oak splits into two trunks about 5ft from the ground to soar upwards.

I spy a fungus about 5ft up the trunk of a wounded beech tree. It is a southern bracket (Ganoderma australe). Semi-circular, it has a hard body and a thick inflated, souffle-like, reddish-brown upper surface, the underside off-white with tiny rounded pores. It is a common species and not unexpected.

Not all the trees are warty and strangely shaped. Indeed, many are as straight as a die reaching for the sky. There are also many occurrences of different species growing cheek-by-jowl. Ash and beech, oak and beech, their roots entwined.

Passing a deep, man-made quarry pit, we spot a wooden bench bearing a dedication in a wide clearing. I sit there for a few minutes while Rosemary takes photographs of the trees.

After I get up again, we walk down one of the narrower paths through bracken and bramble and Rosemary spots another fungus — a multitude spiralling their way up the trunk of a downy birch.

It is birch polypore or razorstrop fungus (Piptoporus betulinus). Bracket-shaped with an undulating margin, it is creamy white on the papery upper surface and slightly whiter on the underside. This fungus will darken with age. The species is only to be found on birch and is very common.

Around the dead or dying tree an extended family of acrobatic long-tailed tits pass, their voices a thin “see-see-see” as they keep in touch with one another. Robins are in full song.

Rosemary finds another fungus growing among the leaf litter by an oak.

This species is Spindleshank (Gymnopus fusipes). The stipes are spindle-shaped, twisted and grooved, hence the common name. The caps are a coppery-brown.

On the trunk of a beech tree I spot a pale oyster (Pleurotus pulmonarius). This species is fan-shaped with a white cap and lateral, short white stipe.

Heading in the vague direction of Drawback Hill on the other side of the valley, we meet a wide and deep quarry site and then a rudimentary private road which we walk along for a brief while. A cherry laurel hedge shielding a house has invaded this side of the wood. Obvious attempts are being made to control this pernicious alien. I’m afraid this will be an ongoing task.

We turn back into the wood and walk through dense cover. A group of rowan trees are hung with bright, orange fruit while the leaves are turning from green to yellow.

Rosemary spots an array of fungi growing on another fallen beech. These are brackets but I’m not sure which one, perhaps artist’s bracket (Ganoderma applanatum).

As we make our way northwards, Rosemary points out a very large pair of fungi growing on a rotten, mossy stump of either oak or beech, it is difficult to tell. It is a fine example of Giant polypore (Meripilus giganteus). Both have a pale apricot colour that will darken over time. One resembles the burst end of a tuba, the other a damaged ornamental fruit bowl.

From time to time, the walker will find discreet, unobtrusive dedications to former lovers of this wood mounted on simple wooden posts. A nice touch.

We hit a point where the public right of way meets another to the sharp right. We move on down a steep hill that leads to the church of St Margaret and Harpsden Court.

The lane is high-sided and fern-covered. Halfway down we take a turn to the south with private land on our left over an unattractive wire fence and the trust’s land to the right.

A male tawny owl hoots away deep under cover some way off. No, they are not limited to nocturnal activity.

Looking around, we both spot something strange on the leaves of a beech sapling — small cylindrical galls on the upperside and corresponding pimples on the underside. This is the work of the gall midge (Hartigiola annulipes).

Each gall contains a single white larva. When this matures, the galls fall to the ground, leaving a small hole in the leaf. Pupation takes place over the coming months and the adults emerge in spring to lay their own eggs on fresh beech leaves, the cycle of life.

A man walking his dog informs us that a grove of birch trees that we passed some five minutes ago will surely be home to fly agaric, probably the most unmistakeable fungus with its scarlet cap dotted with white scales.

A jay shrieks in the background and a green woodpecker “yaffles” way off.

Along the way we encounter horse-chestnut trees of varying ages, their leaves turning autumnal.

Looking along our path, I notice the tell-tale leaves of a whitebeam. We stop and there it is, just a youngster.

At the end of the footpath we cross Woodlands Road to head back to our car via the edge of the woods on the other side.

We drive home for a late lunch pondering all that we have seen. We will return soon when the leaves turn. What a wonderful place.